THE SIPPY AWARDS 2019! The "Where We're Going We Won't Need Categories" Sippy for Excellent I Don't Know What in Short SFF

Welcome to the final installment of the 2019 Sippy Awards! So far we've covered relationships, horror, making-me-cry, and action in short SFF. What does that leave? Well...the thing is, sometimes there are stories that just don't fit into a specific box. Especially with speculative fiction, where the rule is you must break the rules. It means that there are ample opportunities to be innovative, to do things that don't fall in line with the traditional or expected. And for that I have the...

So sometimes it's hard to look at stories that are doing something rather different. Because they don't always fit nicely into the same discussion as other, maybe more mainstream stories. Except that they stand out as doing something new. On first glance, maybe they just seem weird. Odd. Many of them might be dismissed as just that. With maybe a few words on the beautiful language, and maybe a few words on how they were different. But I really love stories that sort of blur the lines between form and message. Where the way the story is told is part of the impact of the story, even as that impact is difficult to define. There isn't a lot of connective tissue between the stories in this category--they are doing some very different things. But that is actually what holds them together here, that each is innovative and daring, that each takes chances and risks that, for me, pay of wonderfully.

So where did these stories come from? Well, from a number of rather unconventional places, as one might guess. From Fiyah, whose mandate has always been to publish black voices who might fall outside the conventional (which is often viewed as the very white "classics" of the SFF canon). From Escape Pod, which innovates not just with what it publishes but by how it publishes, as a podcast for science fictional stories. From Strange Horizons, which in many ways has led the push to innovate the field as a non-profit and as a champion for stories that do something different and new. From Tor, who as one of the largest publishers in the genre is still invested in not falling behind the curve when it comes to experimental and challenging works. And from Lackington's, whose voice and style set it apart, a publication that knows what it likes and doesn't care if that falls outside what is often more popular or mainstream. The stories are dazzling and different, strange and haunting and good. So let's get to the awards!

"Gloss", Kola Heyward-Rotimi (Fiyah)
Ace is the avatar of a man who has built up quite the little empire inside the immersive video game he plays, one built on monetizing his own creativity to create a kind of club where players like him can relax and party. Despite playing by the rules, though, the success of a queer black man was never the intention of the developers, who have made a patch that would specifically wipe away his progress, because we can't have nice things.

"Spectrum of Acceptance", Nyla Bright (Escape Pod)
A planet where autistic people wrote the rulebook might seem like a setting for a dystopian critique, especially given that the protagonist, Ada, is neurotypical and bristles under the restrictions. For her, the delegation from Earth, with their preference for touch, for direct communication, seem like just what she needs. But the story goes in a very different direction, and one that reveals that a fair society prioritizes needs about wants.

"As the Last I May Know", S.L. Huang (Tor)
Nyma occupies a rather strange place in the fabric of her country. She's a sort of sacrifice, a child who acts as deterrent to using a weapon of mass destruction that the country knows all too well is unconscionable--because it was used on them. So now in order to launch, the leader of the nation has to first murder Nyma with his own hands. After getting to know her. Spending time with her. It's some fucked up shit, but so so good.

"This Is How" by Marie Brennan (Strange Horizons)
The making of a valraven is a tragic business, involving the death of a child, and the birth of a hunger that cannot be sated. The story follows that tragedy as it deepens, and deepens, and...then something different happens. It's not a long story, but fuck does it hit, twisting this bit of folklore from grim to hopeful. The valraven might be terrifying, might be born from misery, but that doesn't mean that's all it can be--doesn't mean that there's never any chance of healing. 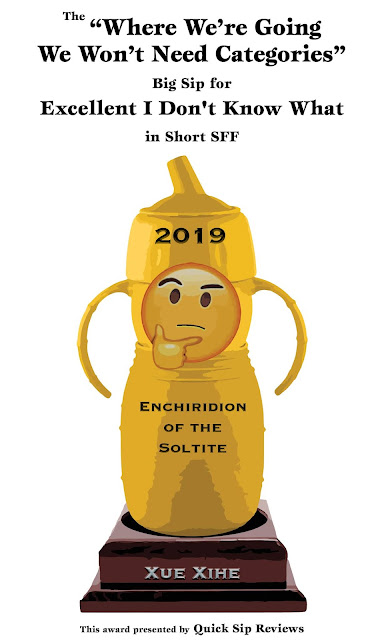 "Enchiridion of the Soltite", Xue Xihe (Lackington's)
The more you explore this story, the more layers you might find. At least, that's the case for me, where a story framed as a sort of travel guide but also spiritual text, deepens more and more with each reading. It's a labyrinth, one where you can wander without the need for a definitive destination of goal. The purpose is the journey, both within the text, where the borderless wandering is a direct resistance to the authoritarian regime currently in power, and on a meta level for the reader, where the story is something of a resistance against rigid structures of reading and interpretation. The detail in the work is amazing, the traveling notes and folklore at turns hilarious and profound, and the whole thing weaves together so well, so powerfully. It's a story really unlike any I've seen before, innovative in its approach to narrative and layering and intricate in its world building and voice. I'm not sure quite how to categorize what it does so well, but it does it, and that's exactly what this award is for.