THE SIPPY AWARDS 2019! The "There's Something in My Eye" Sippy for Excellent Making Me Ugly-Cry in Short SFF

The 5th Annual Sippy Awards show no signs of slowing as we move past horror and settle into a whole new emotional destination. That's right, people, it's time to bust out the tissues, because this category is taking aim directly at your feels! I might be something of an emotive reader, but I feel that comes with trying to approach fiction openly and engage with it deeply. I tend to let stories in to where they can hurt the most, because while that can often backfire and leave me hurt and angry, it can also lead me to some amazing emotional connections with stories, which I'm honoring with the...

Following horror with this category makes a lot of sense to me, because for me both are about evoking emotions. With horror, that emotion is fear. With these stories, it's probably a bit more about...pain. Which might seem a strange thing to value in fiction. But it's not that the stories are about making the reader feel sad. There are plenty of ways that people seek out pain. Through exercise, through sport, through food--pain is about more than telling person that they've taken damage. It's a powerful experience, one of the most primal things, and a story that can hurt in the best of ways is rare and precious. Because it allows people to experience in a controlled way something they'd probably never want to experience in their own lives. It gives perspective, and it mingles pleasure and pain, joy and sorrow, despair and burning hope. It takes a great deal of care, and requires a bit of trust, but these stories I feel earn it and then some.

Publication wise, it's another rather eclectic mix, though Strange Horizons does appear twice. Really that's no surprise for me, as the publication really does a great job at reducing me to a small puddle of tears on the regular. What's doubly appreciated is that Strange Horizons offer ample warnings for people who might not want to take the emotional plunge into a work that deals with such heavy themes.

"Under Their Wings, These Starving Ghosts", Grace Yang (Beneath Ceaseless Skies)
A ghost boy wakes up to find he doesn't remember his life, and that he only is aware during one day of the year, when the birds flying overhead make it possible for him to wander the town where he must have grown up. And then he meets a witch, and together the two begin a strange friendship, and a slow and harrowing journey into some painful memories.

"Many-Hearted Dog and Heron Who Stepped Past Time", Alex Yuschik (Strange Horizons)
Dog and Heron are partners in a dangerous world of theft, assassination, protection, and...love? Dog can partition is heart, giving himself different abilities with each part; Heron can move through time non-linearly. Together they make a formidable pair, but they are a bit useless at confronting the way they feel about each other. It's messy but Real, and oh so good.

"Still Water", Ian Muneshwar (Anathema)
Miles and Trent are taking a trip together on the advice of a counselor following a rocky patch in their relationship. They're both dealing with big issues--trauma, intimacy, and pain making reaching out to one another complicated, if not impossible. They come to a river, one that Miles grew up along, and a series of events on the water test them further, tearing them apart but maybe also leaving them room to come back together.

"Beyond the El", John Chu (Tor)
Connor uses magic to craft food, but he just can't seem to get his mother's potstickers just right. Of course, some of that might be wrapped up in trauma, in grief, and in the messy ties still connecting him to his abusive family. The story features his slow turn toward seeing that sometimes cutting toxic ties is necessary to be free and begin to heal, and for Connor it means starting to see himself as the talented person he is, capable and deserving of loving and being loved. 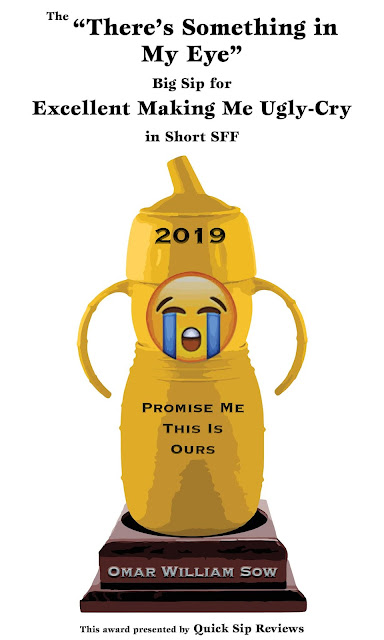 "Promise Me This Is Ours", Omar William Sow (Strange Horizons)
Ouch. This is such a fragile story about a young man, Abdou, dealing not just with the expectations of his family but the restrictions and policies of his government, which sees people like him as sick, as criminals. All because of his relationship with another man, a man who has gone missing. And that alone is enough to just fucking wreck me, because the story unfolds with such powerful prose, desperate and understated, Abdou juggling his need to find his lover against the complete lack of safety for him. He's lying to his family, putting himself at so much risk, and all for the thinnest of lifelines, the faintest of hopes. But it resounds, resounds with the beating heart of a man who can't deny who he is, who wants only a future where he can live, where all the people like him can live free. The world building is intricate and alive, the character work wrenching and grounded, and at the end of it, at that last uncertain moment, I was bawling. So go in prepared for an emotional read, but I'd also say don't go in guarded. It's a story that might hit harder with your shields down, and oh glob I found that so worth it.
Posted by Charles Payseur at 1:00 AM