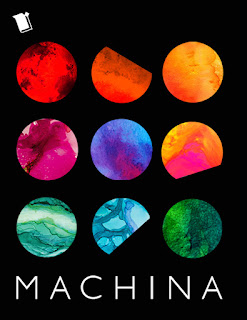 The drama continues and DevLok and Watchover continue their competition to see who will win the bid to help get humanity established on Mars. It’s Machina time! And there haven’t been any huge snags yet. That’s before scores got involved, though. And there’s almost no way better to make humans freak out than to grade them and assign them a number, tying that number to something they want, something they might need. It’s a tense web of people and interests that can’t really exist in harmony, at least as they are now. Someone’s going to get hurt. Someones, most likely. But who, when, how, and why? Let’s get to the reviews

No Spoilers: The challenges to determine what team will help to colonize Mars have begun! The first one, to build a structure and find water, dealing with a harsh landscape and technical issues that will make the teams have to stay flexible, might seem straightforward, but still gives both sides plenty to fret about. Even as the tensions ease some because the waiting is over, other things start to creep in. Doubt, first and most. Distrust. Suspicion. Desperation. The teams are diverse and the cast of the series large. At this point everyone is on about the same page, but the cracks are already starting to show. The egos bruising. The chemistry sparking flames that might just blow everything up. It’s a fun, tense experience that keeps right on building!
Keywords: Mars, AIs, Competitions, Nonbinary MC
Review: Now that a lot of the groundwork has been put down, I find it interesting how much the focus is shifting away from the people at the top. Yes, Trey and Stephanie are still very much present, but I really like how the extended cast is getting more of a chance to shine. Characters like Cameron and Denise, Noor and Hiro are more in the forefront here, and especially Cameron and Hiro get to spend most of the time in the viewpoint role. The upside of this is that it gives the piece a bit more of an in-the-trenches feel while the first challenge is going on. But part of that is that it keeps the focus narrow, limited, and so readers are left to try and piece together the bigger picture stuff on their own. Wheels are definitely turning in multiple areas. We haven’t really seen if Nico is settling in (or if anyone even got the poor guy a desk) and neither are we getting much about what Trey is planning, or how far he’s willing to go to make sure that Watchover is caught with stolen code. I think that’s the right call, though, what with the first challenge making those elements a little lower priority (at least, imo, until they blow up).

And I like how the story is building tensions both competitive and cooperative. Noor and Cameron have some great chemistry and seeing them together makes me want to cheer for them even as paranoid me is also wary and wants to warn everyone not to trust anyone. That’s a big part of what the series is playing with, though, I feel, that sense that everyone here can’t trust each other, despite their goals being the same. It’s still one of the striking aspects of this kind of Mars mission that it’s so driven by competition, by intrigue and possible espionage, by hurt feelings and bitter actions. It makes for great drama, as Hiro is quick to point out and exploit. But it makes for a terrible soil out of which to grow hope and the possible salvation of the planet. It breeds paranoia, and while there is a sense that some of the team members really want to get around that, to live up to the ideals of their mission, it’s not something that can be ignored. There are people operating in bad faith here, people seeking only to profit off the survival of humanity, and it’s a bit terrifying. That said, the mission and the way the teams are able to work is also just cool. I love how Noor acts as a sort of outsider of that, able to see that while this all seems at one level just work, just corporate culture bullshit, it’s also cutting edge and amazing. And that balance is one the episode and the series does very well. A wonderful read!

No Spoilers: Well the first challenge is over and when the winner is announced, well...one side celebrates, and the other side fumes. The tension, that has been rising steadily, only gets worse, and the paranoia and distrust on both sides inches up. This episode moves through the relative lull between the results and the announcement of the next challenge, one that seems designed to push at just the fears and insecurities that a lot of the team members have voiced, especially Cameron. All this while even the neutral ground of the Moonshot is starting to fracture with barely-contained stress. I think is where the real issues at the heart of the situation are starting to show. The hurt and the stress and, more than anything else, the inherent conflict between people working because it’s their passion and their hope to save the planet and humanity, and the reality that they are all employees to investor interests that don’t care about their morals, only their profits.
Keywords: AIs, Mars, Corporations, Romance, Investigations, Competition, Games
Review: Something I think this episode is starting to show is that these people really just need some fucking sleep. And yet they are expected to move quickly, efficiently, flawlessly, on threat of screwing up the entire project, which is presumably the entire point of their company. So no pressure, right? For me, the piece is showing how toxic this kind of culture is, where the hours are long (endless?) and the expectations are so high that they’re never really satisfied. Even when things go well for one of the companies, there is no end to the worry, the fear, the constant watchfulness. And I mean this does speak to the way that people are expected to be constantly working, putting in ridiculous hours with the understanding that the payoff will be equally large. Only there’s no guarantee of that, and if anything these people with their passion for programming might see their work and their code used instead to contribute to the system, to the exploitation, that they are trying to fight against. Which is how people burn out, and how people lose faith, and how it seems like there’s no point in trying when the systems are in place to maintain the structures of power that lead to Earth being on the brink of destruction in the first place.

Meanwhile, a little bit more seems to be mentioned about the reasons for the divide between DevLok and Watchover, and it has something to do with rogue AI. Given the parameters for the next mission, it seems like things are going to get...interesting. And really, everyone is stressed to their breaking point. Trey can’t stand losing, and especially not to Watchover. Stephanie can’t see beyond proving that Trey is wrong. Nico wants things to go smoothly for the investors. Cameron and Noor are becoming a bit distracted with their growing fondness and illicit romance. Most everyone else wants to keep their job. And Hiro wants a scoop. There are way too many moving parts and agendas, both personal and corporate, for things to stay simple for long. Already the goodwill that embodied the Moonshot is mostly gone, though some of it still remains. There’s competition, and then there’s war, and the line between those two is getting fuzzy. It remains a very entertaining struggle, though, and I can’t wait to see what comes next. A great read!

Posted by Charles Payseur at 3:52 AM