THE SIPPY AWARDS 2019! The "I'm Sleeping with the Lights On" Sippy for Excellent Horror in Short SFF

Day 2 of the 2019 Sippy Awards takes something of an abrupt turn from relationships to look at stories that I felt excelled at something a bit...creepier. Now, some people try to separate SFF and horror, treating them as two entirely different things. But like peanut butter and chocolate, I often feel like the two do so well together. And there's no denying the horror elements of some SFF stories, and no taking out the SFF elements from some horror stories. So call them what you will, but today I'm celebrating the...

For me, horror is all about fear, about feeling. And there's no denying that in 2019 there was plenty of that to go around. But even as fear is often used as a tool to divide, to instill hate and bigotry, to inspire violence, I feel it can also be a tool to unite, to build empathy, and to inspire hope. Often horror is a genre where uncomfortable and disturbing themes and content come out to play. The inclusion of those elements confronts readers with things that they often might feel like ignoring. And through those confrontations, some readers must face the weight of the real-world horrors going on all around them, made personal and poignant in the fictional spaces these works open up. From toxic relationships to cosmic insignificance, the works range in their focus, but all tread carefully and powerfully amidst pain, predation, and abuse.

Probably coming as no surprise, the stories here came from two of the biggest SFF horror publications around, The Dark and Nightmare magazines. Not that other publications don't also do horror well, but these two had some incredibly strong years, and the stories here represent by favorites, full of creep and cringe, dread and unease. They also, though, aren't afraid to be funny, and don't hesitate use a bit of gallows humor to get their points across. They are turns beautiful and repulsive, sensual and terrifying. So let's give out these awards!

"58 Rules to Ensure Your Husband Loves You Forever", Rafeeat Aliyu (Nightmare)
Iman has a somewhat simple desire: that her man remain faithful and love her forever. Now, for some this might mean something other than magic and cannibalism, but hey, who am I to judge? And in this often hilarious, incredibly sharp take down of toxic gender roles in marriage, the story manages to be fun and terrifying all at once, showing the price for following the rules when the rules suck.

"Logic Puzzles", Vaishnavi Patel (The Dark)
Following a family of immigrants, the story gathers its horror from a rather unlikely place--logic puzzles. They are the one thing that helps the narrator, the daughter, assimilate better into America (which isn't actually something she's excited about). It's the one bit of magic that makes her able to put up with her new life, but it's an American magic, which means it's kinda fucked up and hungry for suffering.

"Black Flowers Blossom", Vina Jie-Min Prasad (Uncanny)
Some relationships don't end with death. Especially when one of the people is a alien and eldritch horror and the other is a detective reincarnated again and again who doesn't seem able to escape the gravity of their fascination and growing attraction for the unknown (and perhaps unknowable). The story unfolds across multiple lives, drawing the two characters deeper and deeper into one another (both literally and figuratively).

"The One You Feed", Dennis E. Staples (Nightmare)
Ms. Watersong is a Native woman living with two wolves in her heart. One is presumably good, the other presumably bad. But what does that mean when all you have to feed either of them is racism, danger, and exploitation? When you constantly have to swallow your rage and your fear? The story offers up a terrifying and visceral answer for that when, at last, Ms. Watersong opts to have a surgery to remove (release?) her wolves from her heart. 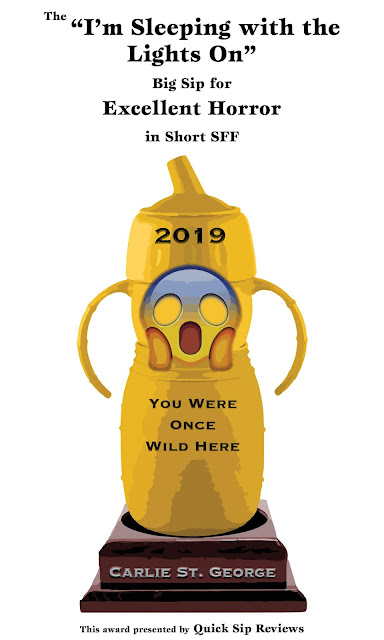 "You Were Once Wild Here", Carlie St. George (The Dark)
The idea of monster hunters isn't exactly a new one, not even the idea of a monster hunting family out to make sure what happened to them doesn't happen to anyone else. But this story does some very new things with the trope, focusing on the daughter of parents who have put everything they have into monster-hunting...to the point where they've each become a bit monstrous themselves. The daughter, though, is coping as she can, which is to say...not well. This is a bracing and vivid story of loss and isolation and a young woman finding something to pull her through that. Which means in some ways rejecting letting her parents believe that she's still normal, that she hasn't been just as changed as they have from the loss they all share. The piece is part mystery, part coming-of-age story, and all horror throughout. Which isn't to say it isn't affirming or joyous or doesn't have a happy ending of sorts. It looks intimately at the horror of erasure, or loneliness, so that it can push through it and arrive at a place of hope (and one that implies further monster hunting adventures which I really kinda want a television show about, okay?).
Posted by Charles Payseur at 1:00 AM