THE SIPPY AWARDS 201! The "I'd Ship That" Sippy for Excellent Relationships in Short SFF

Welcome, dear readers, to the FIFTH ANNUAL SIPPY AWARDS! For those uninitiated, the Sippys are the SFF short fiction awards that no one asked for but I'm giving out anyway! The rules are simple: of all the stories covered by QSR over the previous year, I'm selecting my five favorites in each of five categories. That's 25 stories in total, with 5 that walk away with the prestigious and coveted Big Sip Award. This is obviously the literary achievement that people wait their whole lives to reach, yes? Anyway, these posts will go up, one a day, for the next five days. As is tradition, I'm kicking things off with the...

I'm a sucker for a good relationship story. They don't have to be romantic. Or sexual. Though most of these stories do feature romance and sex, they also feature characters that interact and orbit each other in intensely beautiful ways. For some of the stories, the connections are between just two people, lovers or friends or something else. For others, the connections flow between more people, or did, and were severed. They feature people striving to find comfort and meaning in their own skins, knowing sometimes that takes help, and understanding, and compassion. And occasionally it takes kicking some ass. Whatever the case, the relationships explored in these stories have stuck with me through a very hard year.

The stories come from all over, and it's probably no surprise that most of the relationships read as queer. But it's not just that which speaks to me. These are stories about people dealing with some crushing situations. And reaching out to each other, and helping each other, protecting each other, boosting each other. Surviving. Thriving. They're beautiful and fierce and I'll just get out of the way and let them speak for themselves.

“Tell the Phoenix Fox, Tell the Tortoise Fruit”, Cynthia So (Glittership)
Unfolding in a land recovering from colonization (which will be a theme that runs through a lot of the stories in this category, strangely), this features a couple who risk everything to stay true to themselves, and end up uncovering a historical truth that has been erased by the bigotry of invasion. It's careful and defiant and, ultimately, triumphant in its queer love and joy.

"What Cradles Us But Will Not Set Us Free", Nin Harris (Strange Horizons)
A found family deals with a cursed house that wants to turn them all into monsters, showing that no one living in a toxic environment can be wholly free of its touch. But it also centers and reinforces that it's still possible to fight back against those toxic environments, those corrupt institutions, and work toward a future where people aren't made monstrous just for being themselves.

"The Ocean That Fades Into Sky", Kathleen Kayembe (Lightspeed)
On a planet where invading gods have taken hold and stripped the power of the natural (and native) deities, hope is pinned on a deception where one god is pretending to be another, buying time for her mother to become powerful enough to push back against the colonizers. When love threatens everything, though, it will be a tenuous and fragile trust that must prove itself stronger than hate and violence and fear.

"Canst Thou Draw Out the Leviathan", Christopher Caldwell (Uncanny)
On a whaling ship, a former slave enjoys a life of relative freedom but must keep a part of himself always hidden, always secret. And he must also take part in a brutal hunt that puts the man he's starting to love in deadly danger. Tense but freeing, the story refuses the mandate that historical queerness be tragic and imagines a bright future cutting through a grim present. 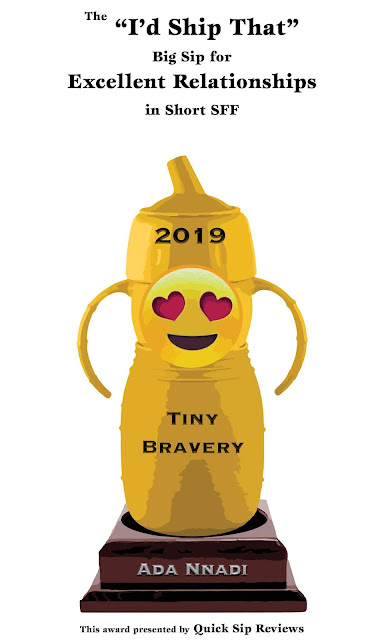 "Tiny Bravery", Ada Nnadi (Omenana)
For the second year in a row, the Big Sip in this category has gone to a piece from Omenana, a magazine dedicated to publishing stories by writers from across Africa and the African Diaspora. "Tiny Bravery" deals with a lot of things--superpowers, trauma, acceptance, friendship, maybe even some budding romantic feelings. The piece unfolds in a facility for those who are having some...difficulties with new powers they've developed. For the narrator and a girl she meets there, Chinwe, the issues are deep-seated and tied to family, grief, guilt, and acceptance. Their relationships with the facility and the people there, but especially with each other, make the story and the alternate world it introduces, come to life. Their journey is part therapy, part confession, part learning how to trust when that's never be easy or safe. And by helping each other, the two are able to begin to work through their own issues as well, pulling down the walls keeping them apart and keeping them from fully exploring their powers and potential. It's a stunning read, and if you haven't checked it out yet, fix that immediately!
Posted by Charles Payseur at 1:00 AM