THE SIPPY AWARDS 2019! The "Time to Run Some Red Lights" Sippy for Excellent Action!!! in SFF

If you were around for the first Fast and the Furious movie, you might remember the news articles about how people coming out of the movie were more likely to make risky driving decisions. Not that they were just copying what they saw in the movie, but that it left them amped! Well, rounding out my categories that are primarily about an emotional response (horror=pain, ugly-cry=pain), this category is all about EXCITEMENT! FUCK YEAH!!!! So hold onto your butts and get ready for the...

As I said yesterday, I'm a bit of an emotive reader. Which means when a story hurts, it hurts. And when a story scares, it scares. But it also means when a story pumps it up, it makes me want to punch the sun in a mech suit the size of a planet! You know, like a normal person. Heh. But I love stories that really make me want to stand up, to run, to arrive somewhere breathless, alive. And these stories do just that, featuring characters fighting with all they have against what seems like an overwhelming situation. A threat to destroy their city, their world; a tournament where dreams are made or broken; an attempt by the actual devil to take the one person in the world you kinda tolerate--these are stories with some high stakes and some intense action.

As for where they came from...kinda all over. From the sadly-on-hiatus Apex Magazine, and from the always defiant Fireside Magazine. From Fiyah, from Tor, from GigaNotoSaurus (which came back from a bit of a hiatus this year). These are often sources for stories that get the blood pumping, the mind racing, the muscles twitchy and electric. So let's get to the awards already!!!

"The Crafter at the Web's Heart", Izzy Wasserstein (Apex)
Denise is a young woman trying to make a living in Traverse, a city built and then abandoned by the Crafter. It's a rough place, ripe with corruption and danger and magic. The piece follows Denise on a delivery that turns out to be much more than expected, and exposes a conspiracy and plot that goes to the heart of the city, and has the potential to unravel the delicate strands keeping Traverse from plunging to the abyss.

"Due By the End of the Week", Brandon O'Brien (Fireside)
Told between the alternating perspectives of Derek (somewhat of an ass wanting to get a good grade on a school project) and Kelly (secretly a magical girl making sure the city is safe from paranormal threats and also needing a good grade on the school project to flunk) as they go about their normal lives. It's a compelling take on the Magical Girl trope, and a fantastic portrayal of high school life complicated by powers and monsters.

"For He Can Creep", Siobhan Carroll (Tor)
Cats. Fighting. Satan. I shit you not, this is an absolutely delightful story told from the point of view of a cat who is not about to let any demon, let alone the King of Hell, get between him and one human who's kinda okay maybe. The piece is hilarious and full of fight, but also a truly heartwarming tale as well, at least for readers who don't completely hate cats.

"The Devil Squid Apocalypse", Alex Acks (GigaNotoSaurus)
The end of the world might look like a violent invasion of tentacled alien fascists, but for a group of punk rockers, not today squidfuckers! The action unfolds as humanity is quickly subdued and put to work, and for Marcy, an aging rocker who is the most realistically T I R E D character I have come across, that means having to get around collaborators and alien alike to fight back. 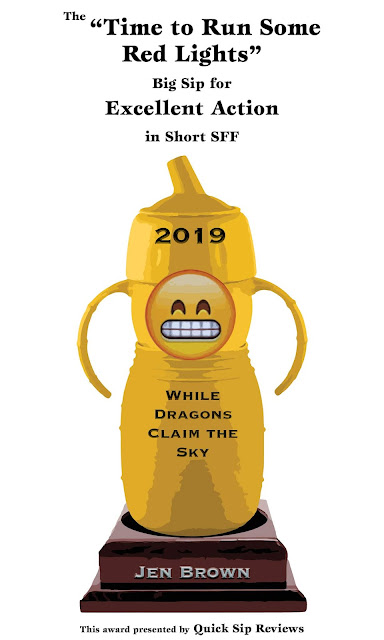 "While Dragons Claim the Sky", Jen Brown (Fiyah)
Appearing in the Hair themed issue, this piece follows two women who are chasing two very different, but also very linked dreams. To be free, to earn enough money and influence that they can maybe push back against the oppression of their system and do something positive for their families. To do that, they partner up to take part in a tournament to get the attention of the nobility and maybe earn enough patronage that they can Do Something with their lives. Of course, in reaching for their dreams they just might find that those shinning goals are built on a foundation of lies and exploitation. And that grabbing them might just bring everything crashing down right on their heads. Luckily, they have each other, their skills, a budding friendship (and possible romance), and a power that maybe even the rulers of their nation can't crush.
Posted by Charles Payseur at 1:00 AM