Hello everyone. In case you didn't know, I'm a little bit in love with Garak (everyone's Cardassian boyfriend from Star Trek: Deep Space Nine). I can assure you, loving Garak is both HEALTHY AND CORRECT, because he is amazing and on an already amazing show he is the frosting laced with rare irradiated particles that will cause your transporter beam to malfunction, scattering your atoms to the cosmos. He is the exquisitely tailored suit with the secret pouch of sehlot pheromones sewn into the lining that will cause the Vulcan ambassador's pet to go mad and "accidentally" maul you to death. He is, in other words, delightful (and sexy), and so to take back some awesome from what is promising to be an incredibly trying year, I am marking 2017 THE YEAR OF GARAK. I have a pile of Garak-packed novels that I will be reading and reviewing. I might even stop in with reviews of some of my favorite Garak-ful episodes of DS9. (And it looks like the extremely talented Nicasio Andres Reed might be helping me with much of the Garak-y goodness) THIS WILL BE AMAZING!

Ahem. First up, I'm going to be looking at the DS9 tie-in novel HOLLOW MEN by Una McCormack. I was lucky enough to find the author gushing about Garak over at Uncanny Magazine not too long ago. Go read that article. Thankfully, I was able to obtain all of the author's Garak novels and the first one I read was the sequel to probably my favorite episode of DS9, "In the Pale Moonlight." The premise is rather complex, but basically Sisko and Garak end up going back to Earth to attend a conference and hijinx ensue. Of course, with Garak involved that means murder. It's glorious. 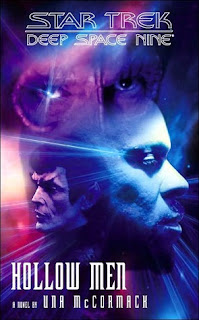 Okay, so first thing's first. This is a big book. I was not expecting it to be this bulky, and part of that is because it includes not just Sisko and Garak on Earth, but a completely separate series of events happening back on the station. Which is interesting and done well but because it's not really about Garak I will only spend a small amount of time on. Basically, there's a heist going on. Odo knows that it's going to happen, but despite everything seems powerless to stop it. It's a very nicely done and tonally it's spot on. Odo feels like Odo, Dax is meddlesome, Worf only shows up for one scene, and the book does a great job with Quark. Also, Bashir can't stop talking about Garak. Which I love. Because they are so cute together. And there's a super-charming part when Odo and Bashir are trapped in a room together and Bashir is gushing about Garak and the whole thing is just amazing. But again, this is the B story and while just fine and even good, it does mean that there's a lot of not-Garak to distract from the main course.

Oh, what a main course, though. This book is set while the story of the show is still going on, just a bit after "In the Pale Moonlight." At the beginning of the story, Sisko hasn't told Starfleet what happened with Vrenaak and how the Romulans were pulled into the war—how he and Garak _pulled_ the Romulans into the war by murdering five people. Sisko is having a very hard time living with that, something that "In the Pale Moonlight" showed and which this book explores expertly. Sisko is ashamed and looking for ways to punish himself while trying to make Garak see that what he did was wrong. Garak, for his part, lets on that he's feeling guilt plenty, but that Cardassians don't…overshare it like humans. And I just love what the story does with Garak, how it shows that what he has left is the dance. Is the game. He's a master player but he's also an exile. And he's hurt and he's lonely and he's watched the home that he loves be tarnished and abused and he wants to act.

Meanwhile the book also revisits what's been happening on Earth in the aftermath of the whole fascist stuff that was going on (a little triggering but still, okay, moving on). Sisko is having deep reservations about what is being done because of The War. And yet everywhere he turns no one is punishing him. Even when people know exactly what he's done (and he tells a good number of people), no one really cares. Or they do, but they think it's a good thing. And Sisko doesn't know how to respond, because he knows that it was wrong. And I love how Garak comes into this, showing that it's true, it was wrong, but also that the situation is much more complex, and while Sisko cannot really be a good man in the midst of all of this, he can still strive to do good. Which contrasts nicely with Garak, who has no real issues with fascism, really, though he'd like to be on the good side of those in power (the one's he's not trying to kill, and probably even them, too). He's the mirror that Sisko looks into to judge himself. They are both loyal to their homes, both love their homes. But they are very different, and while Garak is consumed with playing the game, he is also the product of that, needing people to play along and constantly disappointed that people won't.

Seeing Garak in action is a treat, though, and the author does a superb job with his voice and his tenacity, the way that everything works for him. Even in the face of death he doesn't break, doesn't waver. Everything is a move and even when things seem beyond his control he shows that he's been a bit ahead even then. And him and Sisko together is great, because they don't really like each other. Sisko doesn't hide his dislike and Garak finds it distasteful because Sisko doesn't like pretense and Garak loves pretense. The banter, people! The banter is great! And the novel also begins to set up some things that become bigger later in the series, tying things together in a way that is seamless and makes a lot of sense. And I love all the nods to various things in Trek. The allusions back to "In the Pale Moonlight" and other Trek standards (and okay, yes, I laughed a bit because Morn is always described as super chatty but you never actually see him speak).

The book gives an interesting wrinkle to the actions that both men took in order to put the Federation in a good place in The War. Their situation is complicated and we see the cracks starting to form in the squeaky-clean exterior of Starfleet. We see the ways that Garak influences Sisko and the ways that Sisko influences Garak. The way that they can't quite escape the other's morality. It's a great situation and plot is interesting and tight, with some stellar character work for the main characters and ancillaries alike. And for my money this book was just what I was hoping for. It features Garak in all his glory and also I guess includes the rest of the DS9 crew. There has been a Star Trek shaped hole in my heart since the end of Voyager, and the novels continue to be a way to reconnect. For those looking for more Garak, and especially if you want to complicate "In the Pale Moonlight" and there-abouts from the show, definitely check this book out. You will not regret it!
Posted by Charles Payseur at 1:00 AM