THE SIPPY AWARDS 2016! The "Where We're Going We Won't Need Categories" Sippy for Excellent I Don't Know What in Short SFF

Welcome back to the last entry in the Second Annual Sippy Awards! The short SFF award that no one asked for is back and things are definitely…well, kind of…or, that is to say…fuck it, I don't know but WE'RE DOING THIS ANYWAY!

There are some stories that just sort of take me by surprise. That work so incredibly well but that I can't really figure out what to call. I'm notoriously finicky when it comes to genre and so sometimes it's best to just embrace the nebulous. The undefined. The meta. Today I want to look at works that do interesting things not just with character and plot and conflict but with SFF as an idea. With art as an idea. Stories that push the boundaries on what should be considered the beating heart of SFF. Many of these stories have a lot to say on why people create. Why stories are important. Why giant wasps are scary. Err…well that last one might be a little specific but still!

SFF exists because some people a long time ago weren't satisfied with the conventions of storytelling. Because they wanted to tap into the imagination directly and hell with the establishment. And today that urge still lives and the breathes. Only now it comes against a different establishment, the one that tries to define what SFF is and should be. But I want to celebrate some stories that refuse to sit quietly, that refuse to stay confined. Today I want to present…

"Applied Cenotaphics in the Long, Long Longitudes" by Vajra Chandrasekera (Strange Horizons)
Part interview, part computer program, part history lesson, part metatextual examination on the role and function of art—this story wears a lot of hats and looks damn fine doing it. The piece wanders a bit, but is a lovely conversation and interactive text that feels like it's being experienced rather than just read. The central speculative element, the masks-as-art that have been made alive and, even while fictional, might be more "real" for not attempting to be wholly factual. And this sort of deep, philosophical science fiction that challenges form and function, is exactly what activates my little grey cells and reminds me how important stories, and all art, can be. Which, more and more recently, has been a vital thing to keep in mind.

"Screamers" by Tochi Onyebuchi (Omenana)
Part statement on police brutality, on the hopelessness that is born of oppression, on the way different marginalized groups can be weaponized against each other, this story also looks at the purpose of art. Looks at the ways in which it can be used to break through the walls of apathy and across the barriers of culture and language, to form connections. The story looks at the power of metaphor and the anticipation that comes from wanting so desperately to be moved, to feel something. And how art and especially the art of resistance, the art of blood and sweat and tears, can effectively be used against the dominant oppressors. It's a story about fathers and sons, and cycles of injustice, and about the possibility of breaking free and breaking out.

"The Gentleman of Chaos" by Merc Fenn Wolfmoor (Apex #87)
Speaking of the power of stories, here's one that looks at the magical properties of narratives and identity and the bullshit ways that gender can be constructed in fantasy settings. The main character is an assassin, a prisoner, and a trans man who has to face off against the power of his abusive brother who is the king and seems to be able to twist reality and magic to suit him. The story shows, however, how much personal truths matter, and how systems of tyranny can end by dismantling the narratives that gaslighting assholes use in order to maintain their power. The result is a world that is filled with blood and pain, loss and grief, but where hope and subversion are still possible, and where the chains from the stories that others tell to keep people down can be broken and cast away.

"Black, Their Regalia" by Darcie Little Badger (Fantasy)
This story looks at music and plague, death and friendship. It's another story that in some ways is about art and stories, about the way that people can confront the unknown and the terrifying without losing hope and without losing their sense of humor. The story focuses on three friends who seem doomed to die but who don't let that ruin their mood. So they decide to dance in the face of death. To celebrate it. To sing and to beat their drums and to stomp this plague back into whatever hole it crawled out of. What results is a magical story about hope and the power of belief—not necessarily in a god or gods, but in each other and yourself, and the goodness and joy to be found in the world. 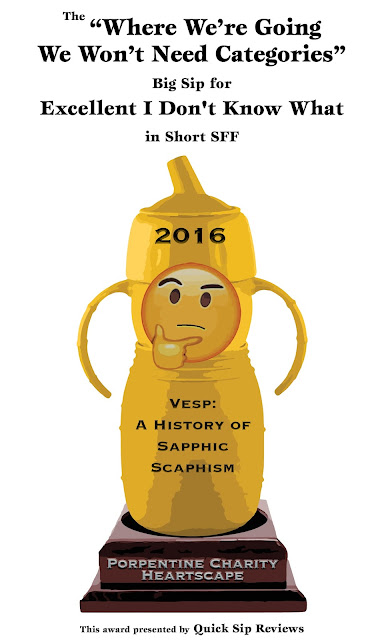 Okay, so this story/game/interactive narrative is weird. It involves wasps and a dystopian waste and if you're like me a lot of clicking through to see what's good in the vending machine. The flavors! The story line creates a masterfully dense and interesting setting that is revealed more and more the more you play. Each iteration takes on subtle differences that can become profound as the piece moves from point to point. Will you betray humanity for a chance to be with the alluring queen wasp? Will you end up crossing some lines with your therapist? Will you stand firm and refuse to allow humans to be eradicated or enslaved? Really there are a lot of choices both great and small to make and I love how it all builds together to make a statement on ability and on mental health, on love and sex and chemicals. The narrator, the player, the reader—all of these are in some ways unreliable. Because the narrator's mind is not wholly under their control. Because our experiences color how we think of the main character, how we think of ourselves, and how the world thinks of all of us. This is a story—an experience, really—that deepens the more time you spend with it. Yes, it is also just a lot of fun. And yes, it can also be disjointed and very fucking weird at times. But it is a challenging and, ultimately, very rewarding experience that blends text and color, character and reader, and does so in a way that I want to see more of. Spend some time with this story—you will not be disappointed!

And there you have it! The Sippys are done, and closed, like the day, and the hand that has written it stows it away. If you missed out on any of the five categories, though, be sure to go back and check them all out. And if this is the first year you're experiencing the Sippys, then maybe go back and check out the 2015 awards as well. All of those can be found here. Until next year, I just want to say thank you to all the authors and fans who made 2016 amazing for short SFF! Cheers!