THE SIPPY AWARDS 2016! The "There's Something in My Eye" Sippy for Excellent Making Me Ugly-Cry in Short SFF

Welcome back to the Second Annual Sippy Awards! The short SFF awards that no one asked for is here again because I said so, dammit! I've shipped my favorite SFF relationships. I've kept the lights on for my favorite SFF horror. So now it's time to examine yet another dimension of SFF short fiction.

Okay so yes, as a reviewer I tend to wear my heart on my sleeve. Part of the joy of engaging with stories is being effected by them. Is following where they lead, intellectually and emotionally. So for me stories that can move to tears are incredibly valuable. They hit and they hit hard. They draw blood.

They also inspire. Each of these stories can be a lesson in empathy. In really trying to understand what the characters are going through. Their grief and their loss and, through it all, their hope. More than anything else, it's the hope that gets me, that moves me, that breaks me and put me back together again. There is despair, yes, and pain. Sometimes far too much pain. Some of these stories are bleak. But none of them are without hope. And so while they all make me a large puddle of feels, when I solidify again I am the stronger for it. And that's why I love these stories, and why I can say without shame that these are the stories that made me cry the most in 2016. Yes, it's time for…

"Plea" by Mary Anne Mohanraj (Lightspeed)
This story brings viscerally home the realities of trying to flee conflict, of trying to flee hatred. Especially with family. Especially with children. The story is about the way that safety can be lost, the way that hope can be crushed, only to bloom regardless. It's a story that is for me incredibly difficult to read but also incredibly important. I might weep as the story winds its way through the harsh cruelties of life and war and bigotry, but it is an unflinching look at what it can mean to be a refugee, what it can mean to have your family torn apart. It is wrenching and it is brutal and it is amazingly done.

"Life in Stone, Glass, and Plastic" by José Pablo Iriarte (Strange Horizons)
Stories that look at the value of art in face of injustice and devastation seem especially valuable now. And I just love how this story creates a mosaic of both loss and hope. The story reveals lives t That were overlooked. That were cut tragically short. In many ways the story is about rage and about struggle and about finding meaning in a world where it never seems like there's enough. Where things aren't fair. But it never loses sight of beauty or joy or hope, and indeed shows how necessary those things especially when there's so much hardship. The story does not seek to erase the anger or the righteousness of people fighting back against injustice. Instead, it's a reminder that single moments of relief can sometimes be great victories.

"Breathe" by Cassandra Khaw (Clarkesworld)
This story features a bad situation getting worse. And worse. It's a story with a relentless pace and weight and momentum. And though it holds out a glimmer of hope in the end, it's also a crushing story about effort and sacrifice and loss. It unfolds far from Earth, under a deep sheet of ice, in a sea where the only life is supposed to be a sort of algae. Only that doesn't turn out to be entirely accurate and for one person stranded in this vast darkness, their world suddenly shrinks away from science and studies and stars and becomes an onslaught of activity, action, and the need to breathe. And at the end of it all I was left bleary, teary, and a little bit broken inside.

"Her Sacred Spirit Soars" by S. Qiouyi Lu (Strange Horizons)
This story is told in two parts and neither of them are particularly…happy. It is the first part that abosolutely wrecks me. Every time. And it's the second part that slowly shows me that not everything is over. The story is lyrical and mythical and amazing, taking a historical fantasy look at a time fraught with conflict and shady medical ethics. I love the way that it weaves this story across continents, across minds and bodies. There is a feeling of flying that it manages to convey, and also a feeling of trauma. Of being cut in two. And of having to find a way forward, either toward finding that other half again somewhere new, or learning how to be whole even when you don't feel it. 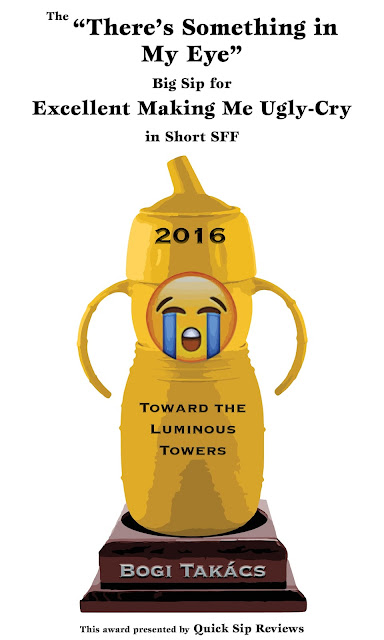 "Toward the Luminous Towers" by Bogi Takács (Clarkesworld)

This story looks at the damage done by war. The way that it twists people and peoples, individuals and groups and nations. It centers on a person turned into a weapon in an ever-more desperate situation, a valuable resource who, in peace, might have found joy in networking, in bringing people together, in creating environments for people to learn and live. But who, because of a war that is poorly run and understood, is exploited mercilessly, again and again, leaving their brain frozen in the pathways of murder. And though they could have been saved, could have been healed, their government decided instead to just…not. The entire piece is heartbreaking in how avoidable the tragedy is, is heartbreaking because of how war is used and what war destroys. From being able to do so much the main character is left with one path left that will let them be free. And that path…well, I cried. It's a commentary on the ways that war reigns in possibilities just as warring governments seek to limit the availability of options, preferring their citizens to believe that there is only one choice, only one possible decision in the face of the looming conflict, and it's to let the government decide. And it's that narrative the main character ultimately fights against, giving everything to prove that even in the direst of situations, there are always options. The ending is beautiful and triumphant but also an emotional weapon of mass destruction. So, rather fitting to the subject matter. It's a stunning read!


And there you have it! Be sure to stop back in next Sunday when I'll reveal the winners of The "Let's Run Some Red Lights" Sippy Award for Excellent Action! in SFF.