THE SIPPY AWARDS 2016! The "Time to Run Some Red Lights" Sippy for Excellent Action!!! in SFF


Welcome back to the Second Annual Sippy Awards! The short SFF awards that no one wanted is still going on for some reason! I've shipped my favorite relationships. I've shivered in fear of my favorite horror. I've bawled until I was nothing but a husk of raw feels. And now I'm back again. I'm better than ever! Because it's time to get exicted!

SFF has the power to tug at our hearts, but it also has the ability to get our heart pounding. To get our blood hot and our fists clenched. There's a lot of SFF that tends toward the cerebral side of things, but there's also SFF out there that sweeps everything onto the floor, tips over the table, and uses it for cover in a sudden blaster battle. And today I want to look at the stories that shoot first. That jump out into the open air without a parachute. That drive a hundred miles an hour in heavy traffic because there are cyborg-ninjas on motorbikes who will destroy the future unless you get the enchanted chinchilla back to his home dimension.

Ahem, well maybe not exactly that last one. Still, these are stories that do that cool slow walking away as the explosion happens. That tell the others to go on ahead and then ready their shotgun, waiting for the enemy to round the corner. It's time for…

"Braveheart's Homecoming" by Dilman Dila (Mithila Review)
What this world needs more of are stories featuring stolen flying gondolas and death bots and people desperate to save their families from the abuses of corruption and systems of oppression. This piece captures the feeling of being stuck in a horrible situation and trying everything possible to get out. But finding that there is no way to appease oppressors, no way to win fairly. So sometimes you have to cheat. And sometimes you have to risk everything. The story is about safety and about the fragility of it, the illusion of it. And it's about border and divides. And it's a wrenching piece that really gets the heart racing.

"Three Points Masculine" by An Owomoyela (Lightspeed)
War has come to what certainly seems to be America. A new civil war fought in burnt out strip malls and Wal-Marts. And for all that the laws have changed and people are presumably allowed to express their genders, the policing of gender expression has become its own sort of injustice, throwing consent out the window in favor of tests that reveal just how masculine and feminine a person is, as if that can be determined. As if those ideas are the only options. And it's a story of war and battle and loss, but also one of hope and resilience and fighting along many different fronts.

"Everything that Isn’t Winter" by Margaret Killjoy (Tor dot com)
A tea-growing commune just wants to be left on its own. And one person just wants to know where they fit into a world that needs peace in order to survive. Luckily or not, it's not a question they have to answer immediately, as conflict seems to seek them out. What follows is full of explosions and gunfire, but at the heart of the story is also an aching love, a fear and an insecurity and a need for somewhere to belong. The story continually ramps up the action, starting with peace, a dance, and then escalating quickly from there. It's got all the bullet and mayhem an action junky could want, and a gooey center that let me craving more.

"That Which Stands Tends Toward Free Fall" by Benjanun Sriduangkaew (Clarkesworld)
Sometimes all a person wants to do is escape from conflict. From the constant danger and the impossible moral questions. Sometimes a person bends their entire being to that escape, and still finds that when they turn around it's still there waiting for them. This story is about legacy and about the choice to go to war, to fight when there are no good options. And it features hard love and cybernetic assassins and a relentless drive. There is a gravity to the global conflict the story reveals, and it pulls the characters into a freefall that they have to work to stabilize and control. It's a smart, sexy story that completely satisfies. 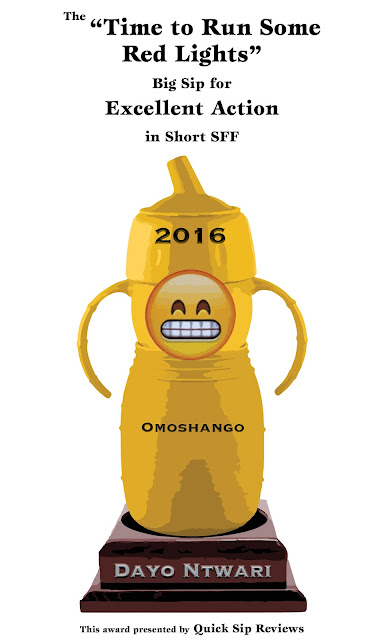 Some stories leap off the page or the screen with the power of their prose and the momentum of their action. But this story doesn't leap—it explodes of the page in a dizzying array of magic and science and hope and freedom. I could feel the heat from exploding jets, could feel muscles tensing, wings straining, all for a glimpse of clear sky, for a hope beyond a world that has doubled down on colonialism and racial exploitation. The story reveals a world on the cusp of something new, with an open invitation having been given to those people living under threat and slavery and systemic hate. Come away into a place that will treat you better. But even the completely nonviolent option of escape is treated as an attack by governments too dependent on institutional racism to just allow its citizens to leave. The story is about the boiling conflict, the covert resistance, and the beauty and power of people who no longer have to hide, who no longer have to fear. The world building here is fantastic and I just love the rush of the story, the cinematic flare of it all. The story unfolds to me very visually and there is a breathless quality to it, an urgency that pushes forward faster and faster. There is a feeling that this moment is huge, that this could either make or break an entire movement, lifetimes of work. And it does not disappoint, creating something joyous and raw and magnificent.

Okay, and then there was one. Stop back in next week for my picks for The "Where We're Going We Won't Need Categories" Sippy Award for Excellent I Don't Know What in Short SFF!