THE SIPPY AWARDS 2016! The "I'm Sleeping with the Lights On" Sippy for Excellent Horror in Short SFF

Welcome back to the Second Annual Sippy Awards! Last week my heart melted as I went through my favorite SFF relationships. This week…things het a bit more creepy.

Those who know me know that I am a scaredy-cat. Horror movies? Yeahmaybenotthanks. But I will admit that I am still drawn to being scared. To being frightened. It's something that gets the heart racing and the blood pumping. And, in SFF, things aren't even as simple as a serial killer on the loose. From cosmic horror to body horror to monsters to…cooking? SFF horror definitely knows how to keep things interesting and innovative. And today I want to honor those stories that make me want to hide under the covers and wish for sunlight to save me from the dark. Which means, of course, that's time for…

"Things With Beards" by Sam J. Miller (Clarkesworld)
If you would have told me one of my favorite stories of the year was going to be a queer sequel to the horror movie The Thing, I...probably would have believed you. If you would have told me that it would be published at a major SFF publication...well, maybe not so much. Seriously, this story looks at what makes the original film so compelling while drawing out the scope and the metaphor and weaving a narrative about difference and about monsters and about resistance. It's about passing and about hiding and about infection. And it's an incredible complication of the original text while standing on its own marvelously. So, all together now: fanfiction is art, fanfiction is valuable, and fanfiction kicks ass!

"The House That Jessica Built" by Nadia Bulkin (The Dark)
This story really captures a lot about what makes horror effective and then twists it. The idea of belief, and of not being believed, is something that horror has always done. Why are the gothic main characters mostly women? Probably because when they claim to have seen a ghost all the men just laugh them off. Well, this story takes that idea, crafts it into a blade, and then plunges it straight into the heart of the reader, forcing them to watch with their last breathes just what just tropes have wrought. What horror and what despair. What unyielding bars such thinking erects around the women who could have freedom if only they were believed. It's a gripping, uncomfortable, and amazing read.

"The Marvelous Inventions of Mr. Tock" by Daniel Baker (Beneath Ceaseless Skies)
I'm a bit squeamish I will admit and normally don't go for body horror but there's something so delightfully twisted about the horror of this story, which seems people transformed into mechanical devices. Clocks. Wind-up toys. The story is tense and mysterious and a bit disjointed and it all creates a slowly building momentum that becomes something truly nightmarish by the end. Seriously, the final sequence of this story is one of the most difficult to read this year, and it succeeds by the strength of its prose and the logic of its characters, the sort of poetic justice that drives Mr. Tock.

"Godfall" by Sandra M. Odell (GigaNotoSaurus)
This story has so much going for it. The enormous corpses of dead gods. The absolutely terrifying things that come along a few days after the gods fall to devour them. Cults. Desperation. Airships. Love. It's a moving story about someone who just wants to earn enough to get out of an admittedly ugly game but just keeps being brought back in. Until, finally, things get a bit out of hand and…I consider the piece horror for a reason. The action is intense and the imagery brain-searingly memorable. And just the premise of these gods tumbling to Earth, dead and scavenged by the world's governments, is something that I think works magnificently. It's creepy and heartwarming and crushing all at once. 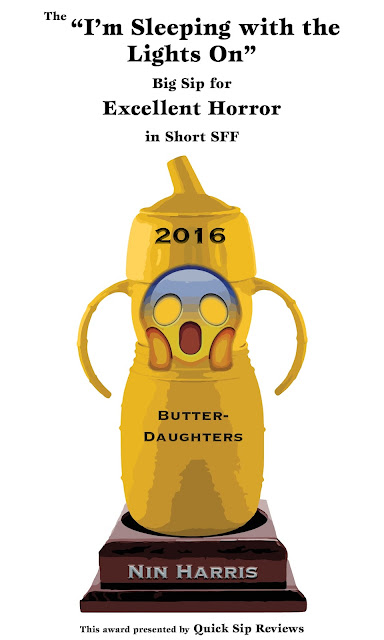 On the one hand, this might come as a surprise to some. The shortest story on this list (and indeed it's probably the shortest story out of any that appear in this year's Sippys) is my favorite exploration of horror? Well…yeah. I don't know if I can convey just how absolutely creeped out I was by this story, just how much it got under my skin. Just how much I wanted both to taste the terrifying delights of this magical butter and wanted to see what was going to happen when the story fades into anticipation. Food and SFF is one of my favorite combinations, and food and SFF horror just feels like such a great match. This story builds a sci-fantasy world and populates it with strange creatures and even stranger rules. And I'm captivating to see these rules unfold, to see how the narrator seeks to attain the ultimate in culinary horrors. This story makes me hungry and disturbs me at the same time and it's great and it's my pick for the best SFF horror story of the year!

All the thanks to all the amazing authors for keeping me scared in 2016! And remember to stop back in next week, when I'll reveal the recipients of the 2016 The "There's Something in My Eye" Sippy Award for Excellent Making Me Ugly-Cry in Short SFF.