THE SIPPY AWARDS 2018! The "Time to Run Some Red Lights" Sippy for Excellent Action!!! in SFF

Welcome back to the Fourth Annual Sippy Awards! Some part of you might be wondering, “why?” The answer: to celebrate short SFF across different styles that make excellent use of various elements to shine as examples of why I love this field. There’s no panel of judges or voting population, just me and my inflated ego and love of short SFF. Given how most short SFF awards focus on length, I wanted to look instead at how stories use different elements to stand out and be powerful. This year I’ve already shipped some excellent relationship, cowered before some excellent horror, and bawled from the some emotionally devastating reads. Which means today it’s time to put the pedal to the metal with...

The “Time to Run Some Red Lights” Sippy Awards
for Excellent Action! in Short SFF

These are stories that got my blood pumping, that made me want to run outside and punch an eagle in the face. Or, perhaps more accurately, they made me want to climb into a mech suit and punch the moon! I mean, come on, the moon is pretty smug up there, always looking down on everyone. Just saying. Anyway, the action doesn't always have to be traditional battles and brawls. Some of these stories are about a chase, or a race. Some are about war and the struggle of the individual against the weight of history and press of injustice. But these stories run hot, fast, and furious, and I think that stories like that deserve to be seen, because they do show how much fun and thrilling short SFF can be without sacrificing nuance or meaning.

As to the venues, there's perhaps less surprises here as they have been in other categories. All the venues are pro-paying and rather high prestige. Uncanny and Strange Horizons are both making second appearances in this years Sippys, and Lightspeed punches its ticket along with both Clarkesworld and Beneath Ceaseless Skies. It's not that, in my opinion, any of these publications are more action-focused, but when they choose to go for it, they do brilliantly. So let's get to the awards!

Sa Segokgo is a famous racer in a competition that's not your usual fare. She pilots a mech suit that races through time, through alternate realities, risking life and limb and perhaps most of all, her reputation in an attempt to keep a promise she made long ago. With age wearing on her, though, and the competition getting fiercer, it's uncertain if this latest race will be her last.

This is a rather startling and brash and sexy and yet nuanced look at life and death for a pair of should-have-been-decommissioned super soldiers. Built and trained to kill, they're still figuring out the other parts as they try to steer a course forward, haunted by their experiences and their abuse and trying through it all to take ownership of their actions, their bodies, and their hearts.

Dust in a distant world where a small colony is finally learning how to navigate a quasi-seasonal shift that is incredibly deadly. Mostly they just remain locked in caves while a certain light is in the sky, giving off its strange radiation. But with a ship inbound from their ancestors, Mack's tasked with leading a small group to retrieve what's been sent...hopefully before the shift. Things, of course...don't go to plan.

Poetry and resistance meet in this vividly rendered story about intimacy, abuse, and voice. In a galaxy where brutal dictators can go so far as to alter entire peoples so that they cannot speak, cannot dissent, Li Sin and Vector are revolutionaries who have been deeply hurt in their quest for justice and freedom. Mostly they've given up the fight, but events conspire to bring them in again, and pit the power of art against the brutality of tyranny. 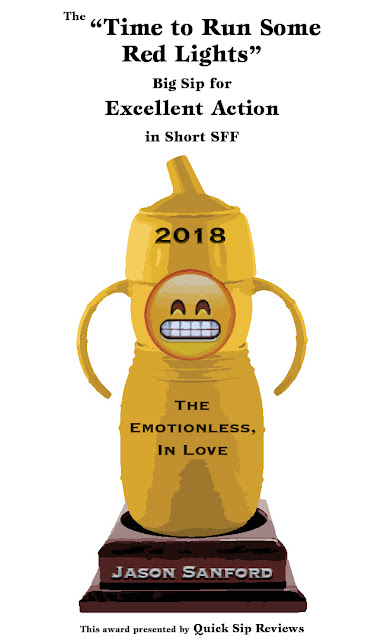 “The Emotionless, In Love”, Jason Sanford (Beneath Ceaseless Skies) [novella]

Following the powerful "Blood Grains Speak Through Memories," this novella (one of only a few published at Beneath Ceaseless Skies) follows Colton, a young man without emotions. Even without fear or love or hate, Colton knows the benefits of having a community, of fitting in. In a setting where smart "grains" can override certain people's will and make them into killing machines should they violate the natural world, fitting in is rather necessary. Only through constant motion and never exploiting the world can people survive. Only when Colton's caravan stumbles across a buried secret, the lies of the grains comes clear, as well as their desire to cover up their own inconvenient past. The piece is thrilling and awesome in its scope and scale. The battles here are stunning, the stakes visceral, and the outcome never certain. It's a damaged world that Colton and the grains share, but that doesn't mean it can't be battered further as the cycles of violence continue. And at the heart of it, a different kind of fire burns, and the story does a wonderful job exploring passion, love, and all the emotions that Colton was missing out on. It's a roller coaster of a read, cinematic and richly detailed with an ensemble cast and beautifully haunting world. So if you haven't already, set aside some time and Read. This. Story!