THE SIPPY AWARDS 2018! The "There's Something in My Eye" Sippy for Excellent Making Me Ugly-Cry in Short SFF

The 4th Annual Sippy Awards keeps right on moving! That’s right, the SFF awards that no one asked for and few pay attention to is back! I’ve shipped my favorite relationships, and I’ve cowered in fear before my favorite horror stories. Which means that it’s time to reduce myself to a small puddle of tears somewhat resembling a functioning human being. yes, it’s time for...

When it comes to venues, it's once again a rather eclectic mix. I'm so happy to include a Shimmer story here, in part because it was the publication's final year and they've definitely given me a lot of stories over the years that have made me weepy. And there's the second story from Omenana to receive a Sippy, too. Seriously, if anyone is missing this magazine, reconsider. There's so much amazing work. Tor makes its first appearance in the Sippys this year, as does Terraform, two publications that are part of larger publishing bodies that definitely flex their reach to bring in some awesome stories each year. And the winner here is from what was probably my favorite publication of 2018, Strange Horizons (at least, it definitely led the pack with stories that made it to my recommended reading list). So yeah, a diverse bunch. To the awards!

Sweeping in its scope, the piece looks at a sort of invasion of Earth, but not one that you might expect. And it follows a man from his early childhood, dealing with family and ambition and love and loss and there's such beauty to it, such hope and vulnerability. The way it handles family and adaptation and maybe even extinction is so careful and just hit me right in the feels, okay?

Focusing on two boys who bond over comic books and superpowers, this piece builds up this wonderful situation where Duncan and Asaf are striving for perfection in the face of death and tragedy. And the piece really looks at what it means to live, and what makes living worthwhile, as seen and witnessed through the eyes of children who are have had to deal with so much already. Shattering but oh so good.

“Me, Waiting for Me, Hoping for Something More”, Dee Warrick (Shimmer) [short story]

In some ways this could almost be a horror story, as it frames a trans woman being haunted by a sort of ghost. Only the nature of the ghost is both intimate and toxic, a sort of condensation of fear and hurt and gaslighting given insidious voice inside this woman's head. But how she reaches for healing, and hope, is emotionally resonating and incredibly rendered. It's a story with a palpable darkness, but also an unyielding light.

Imagining a future where the current trends in immigration "reform" and injustice continue, the story finds the narrator deported to a country they've never known, a world that they were never a part of. Built around the dangers of climate change and ecological destruction, there's such a sense of fragility and loss here, showing the ways that bad policies only accelerate the planet on the road to complete annihilation. 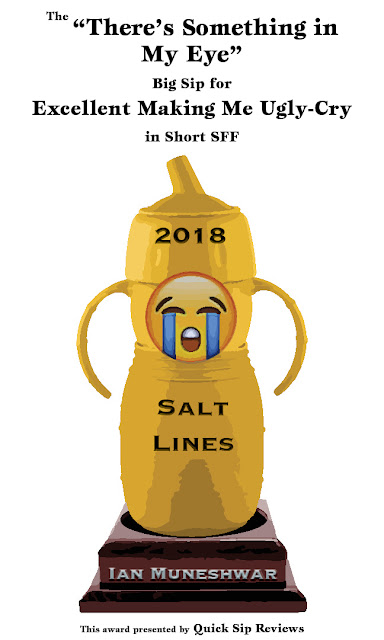 This is another story that definitely knows how to marry darkness and beauty, this time focusing on a gay man from Guyana who is haunted by what he witnessed there and what he's brought with him to America. It's a story that looks very thoughtfully but viscerally the weight of the stories that justify violence against queerness. That make people into monsters that need to be destroyed. And how that can become a sort of seed, just as fairy tales and myths and folklore are supposed to, burrowing into people and growing into intolerance and hatred and violence. For Ravi, the main character, it's something that is eating him from the inside out, because of how it colors his interactions with his family, who he thought were okay with him, who he thought still loved him. But who, he finds out, are still stuck in the old stories, seeing him in many ways monstrous. And it's a story about what that monstrosity can become, how it can sublimate into something beautiful and affirming, but always carrying with it the darkness of the reality beneath the stories. That queer people often face brutal violence because of who they are, and that it's reinforced by a whole system of stories and laws. It's a crushing piece but one that reaches out for warmth and passion and pleasure and finds something worth holding onto. Prepare your feels for imminent destruction, but definitely go and read this one!