THE SIPPY AWARDS 2018! The "I'm Sleeping with the Lights On" Sippy for Excellent Horror in Short SFF

The 2018 Sippy Awards keeping rolling on! For those just joining, the Sippys are the "coveted" awards no one really asked for, celebrating short SFF across five categories grouped by theme, as picked by me. Last week I revealed my favorite relationships in short SFF, and this week I’m going in a much darker direction. So make sure you've brought your noise-cancelling headphones, all creepy doors to the basement are chained tight, and get ready for...

For me, horror is all about fear, about feeling. And certainly 2018 has been a year ripe with horrors great and small, global and personal, for probably most people reading this. It's probably no surprise that a number of the stories I've chosen to celebrate here focus on the climate and natural world, the ways that humanity it driven by exploitation that is unsustainable, cruel, and ignorant. But there are other horrors still. Some that dress themselves in the guise of virtue. Some that hide in the pillars fo society, in its laws, customs, and media. And some that can only be heard through the static hiss of a recording, waiting for someone to press play.

As for venues, Nightmare Magazine (as might be expected) had a very strong 2018, and comes away with two of the five spots this year. Apex, another publication devoted to dark SFF, also walks away with one. And the Book Smugglers and Fiyah both make the list as well, because while neither of them focuses specifically on horror, they certainly do a great job of it when their attentions draw in that direction. Many thanks to all the people who helped bring these stories into the world, from the authors to the editors to the people behind the scenes. So, to the awards!

This story surprised me. Framed in some ways like a YA or even MG story about difference and family and maybe learning to accept new situations in the name of harmony and tolerance...the story instead dips down into the nightmare of abuse, gaslighting, manipulation, and violence. It's difficult, it's disturbing, it's damn good.

“Leviathan Sings to Me in the Deep”, Nibedita Sen (Nightmare) [short story]

Leaning on classic horror elements, this story twists expectations to reinstate some fear of deep waters. On one level, it's a story of humanity trying to impose its will on the vast terrain of the ocean and finding instead that a stronger will already rules there. And it pulls the reader down into the depths, the light above slowly fading until not even a glimmer remains.

Focusing on two sisters and a small village, this piece reveals the horror of roles that don't fit but that are ruthlessly enforced all the same. The horror of expectation, of media helping to shape what violence gets seen as horrific and what as unavoidable and mundane. It struggles under the weight of systemic oppression, and shows what happens when the only tools to escape abuse are weapons.

The Earth can only be pushed so far before it pushes back in this story about the natural world fighting back against the aggression of humanity. The horror here is visceral and physical, and yet it also plays with our ideas of justice, of survival of the fittest and the divine right to rule. For so long humanity has exploited the world because it could. But what if that logic were taken up a level, and humanity was no longer at the top of the food chain? 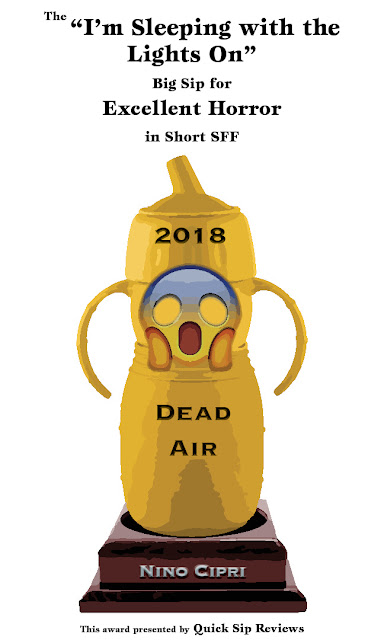 This story, people. Nita is an artist, and her current project is a series of interviews with the people she hooks up with. The latest of whom is Maddie, a woman with scars and a mysterious past that draws Nita in. The two have an intimate, largely healthy relationship. Except that Nita isn't really willing to let Maddie's past be, and begins to dig into it even when...there are signs she maybe should leave it be. And the piece sinks fast, dragging the women down with the gravity of pain and cycles and generations of violence and loss. This is not a story to read (or listen to) if you're wanting to avoid your skin crawling or the feeling of icicles of fear climbing their way up your spine. The structure is innovative and fresh, the characters achingly real, and the horror erasing narrative distance, reaching out not just toward Nita and her project, but further still, toward the reader themself. And fuck, yeah, it's my favorite horror story of 2018.