THE SIPPY AWARDS 2018! The "I'd Ship That" Sippy for Excellent Relationships in Short SFF

It’s 2019! Which means that I’m already behind on reviews (I will keep saying this until it's not true)! But it also means that it's time for me to put on my Serious Critic Hat (hahaha) in order to host THE FOURTH ANNUAL SIPPY AWARDS! That's right, I've been doing these things for four years already, and the formula hasn't changed. For those wanting to learn a little more, you can check out this recent post where I go through the basics. And I know, I know, I'm normally the first to hesitate about awards and attempts to be objective and all that, but keep in mind that these are just my subjective favorites, coming just from those venues that I cover here at QSR. There's a lot more out there, but that doesn't mean I can't celebrate the stories that I loved from 2018. So let's begin, starting with the...

I'm a sucker for a good relationship story. They don't have to be romantic. Or sexual. Though most of these stories do feature romance and sex, they also feature characters that interact and orbit each other in intensely beautiful ways. For some of the stories, the connections are between just two people, lovers or friends or something else. For others, the connections flow between more people, or did, and were severed. They feature people striving to find comfort and meaning in their own skins, knowing sometimes that takes help, and understanding, and compassion. And occasionally it takes kicking some ass. Whatever the case, the relationships explored in these stories have stuck with me through a very hard year.

In terms of venue, there's a bit from all over on display here, from the stalwarts publications of the genre as well as from some that are a little newer or less well known. But that's part of why I love reading outside just the publications that tend to get nods come awards season. Because Omenana and GigaNotoSaurus and Fiyah all produce stunning short SFF. So too do Strange Horizons and Uncanny, and it warms my reviewer heart a bit to be able to include pieces from all over here for your enjoyment. To the awards!

The relationships here are messy and amazing. Aliah follows her brother down to the realm of the Silver Dragon, where she finds things...aren't really what she expected. Of course, she's not what the Silver Dragon was expecting, either. What follows is haunting and so, so careful, but intricate and beautiful and gutting and so, so good.

“You Can Make a Dinosaur, but You Can’t Help Me”, K.M. Szpara (Uncanny) [short story]

Sometimes a story just stops you with the power of the core relationship it depicts. The way this story handles intimacy and trust, identity and family, is breathtaking. Told in the second person, you're Emerick, a trans man in need of bottom surgery. The story centers you and your partner Leo and adds to the mix dinosaurs, alternate dimensions, and a father who should be eaten by a T-Rex.

Broken between two parts that are separated by an incredible amount of time, this story reveals Daniel and Kathy as they find each other, do science, and try to resist the gravity of loss. It's a piece that seems aimed directly at tragedy, and yet shows that through the promise of science, and the perseverance of love, that some stories just take a loooooooong time to get to their happily ever after.

This story is a hell of a lot of fun. The relationship here is both complicated (sisters-in-law as well as lovers) and broken (their husbands both having recently died), and flavored with the fact that oh right, they're both vampire hunters/paranormal fixers with deadly skills in both magic and blade. I would still watch ten seasons of this show and can only hope that someone in Hollywood is smart enough to make that happen. 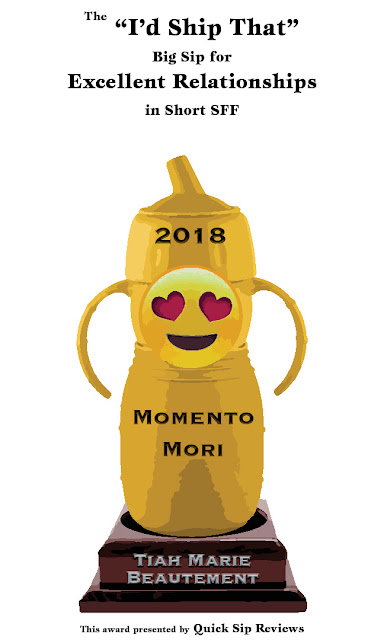 I cannot say enough about this story. If I were trying to capture the feel of it in one sentence, I'd probably say "It's an incredibly delicate look at consent, disability, independence, and love, all wrapped up prose that will make you want Death to be your boyfriend." But there is so much here to unpack and enjoy, from the way that the main character is split between her freedom in the water to her resilience on land dealing with her chronic pain. And Death here, so often cold or aloof, is just charmingly careful in his attempts not to overstep. For a being who always seems inevitable, who seems always to be violating people who don't want to die, this version of Death understands deeply the respect that consent deserves. He's kind and obviously cares so much for the main character, and yet never forces anything, never does anything that implies that she's not capable or whole. It's a beautiful story, with dialogue that perfectly captures the relationship between the main character and Death, the simmering romance that's hot but never uncontrolled. And seriously, it's the completely unexpected story I didn't know I needed from 2018, and you should go read it!