I'm dipping back into the Rupert Wong pool today with a look at this new novella from Abaddon Books. Like with the previous installment, things get messy quickly, which is all in a day's work for a cannibal chef. As followers of my reviews might know, I'm a sucker for SFF stories that bring in interesting takes on food and this is definitely a unique example. It's certainly not for the faint of heart, though, and it does require wading through an impressive amount of bloody carnage. Before I give too much away, though, let's get to the review! 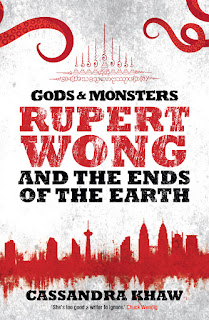 Rupert Wong is back and things time the action is leaving Asia and headed to merry ole England, as Rupert is pulled into some seriously messed up shit courtesy of his erstwhile employers, a pack of ghouls, and the political machinations of the Greek gods. Plus food, random and constant violence, and maybe eventually kinda trying to do the right thing. Basically, take everything about the first Rupert Wong novella and kick it up a notch (cannibal Emril style!).

Seriously, though, this story is an intense and jarring ride. Where the previous adventures of Rupert kept things fairly local to his home, this time he's dumped into a turf war between pissed of deities both old and new as he tries to steer a course toward justic—haha, I mean toward saving his own skin. Part of the draw to this series, after all, is that Rupert isn't exactly a nice person. Or a good person. For all that occasionally he tries to do something good, there's also the part of him that chops up people to serve to ghouls, who is trying to get out of his time in Hell by working for the forces of Hell to do Hell's work. So…no, he's still not a great person. But there has certainly been some personal growth with him, and there is a sense that he's finally being able to see himself clearer, to want to be better even if he sucks at it. He knows full well that the whole "doing bad things in the name of good" game is a load of shit, but he also knows that all games favor the house, and sometimes the little people need to stick together so they don't end up ground meat on a ghoul's plate.

The scope of the story is…ambitious. I will admit that this story does get a little crowded. It's dense with violence and misadventure and there are characters constantly being introduced only to die or fade into the background. That said, the story does a great job of giving each character a solid personality and flavor. The Greek gods take center stage for much of the story and they are appropriately weird and messed up. The setting takes a rather stark look at godhood and what motivates these beings, where they come from and what they want, and very little of it means anything good for humanity. That humanity is responsible for creating them is something that the story brushes against time and again, showing that so much of what makes the world magical and sometimes-wonderful also carries with it a deep corruption. The gods are selfish and cruel and Rupert's reaction is to try and be selfish and cruel back, and it's a tactic that he finds some success with. The piece also pulls on the clash between past religions and newer gods, beliefs that go beyond organized pantheons that nonetheless have a life and power of their own. And I love the way the story handles these newer beings, more self-aware and with the times but also off somehow, more mercurial and fluid and in many ways more dangerous than the older gods.

The plot is fast and reflects Rupert's fish-out-of-water place in London. For a long time things just sort of happen around him. There are players and players and all of them want to know how they can use Rupert. And Rupert, for his part, is along for the ride. He's a survivor, which means that he knows when to fight and when to run and when to start making deals. Things get very, very wild before there starts to emerge a deeper organization and direction, and while it makes for a whiplash-inducing pace of twists, betrayals, deaths, and explosions, it never quite loses sight of itself. There were many times where reading, though, that I felt a bit like Rupert, constantly being beat to shit and not knowing where the next hit was coming from. It's a relentless read and the level of brutality can be almost numbing. Of course, that seems quite appropriate. Rupert is numb to violence, and yet even so knows he shouldn't be, knows he should care, and so tries to help who he can even as his primary concern is to help himself.

In the end the story is fast and fun. The voice is wry and the visuals are stunning (both gorgeously so and nightmarishly). Placed into a setting with some more "recognizable" deities, the setting doesn't lose its quirky originality and edge. For all that there are Greek gods and Lovecraftian horrors, this is still very much a Rupert Wong story, and the ending captures that perfectly. There's a lot to like and a lot to get excited about, including the hint of further adventures to come. For fans of the first story, this is an excellent continuation, and I definitely recommend you check it out!