People, Glittership now has POETRY!!! Rejoice! Queer speculative poetry is like the best so I am ALL ABOUT this decision, and especially with poetry being discontinued at Apex I love that a venue has re-upped on the form. Plus, you know, awesome SFF short fiction. Today I'm looking at half of the most recent issue, some of which is available online for free right now and some that will be available soon. I do recommend that if you like the publication you go and either buy the issue or become a Patron, which will also get you access to the back issues of the ebook as well. The stories are largely about challenge and about the strength it takes to keep going in the face of pain and loss and adversity. These are stories of people overcoming the tragedies in their lives and finding people who make going on easier. And along with the poetry the issue is one about hope in darkness, and the coming of light. It's an amazing issue that I will review presently! 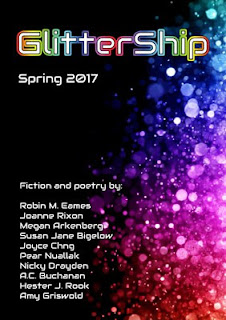 This is a story about superpowers and chronic illness and pain and being small. For Syl, a gender fluid person with fibromyalgia and a slew of minor powers (minor telekenesis, minor healing, minor laser vision good for making toast, etc.), the world is all about navigation. They are never really able to relax or take a day off from their reality, from the pain. Even good days carry with them a dull ache and the various ways other people treat them, misgender them, hate them, intimidate them. And even when they aren’t the focus of everything bad happening, there’s also their friends and family and found-family who face discrimination and violence. The setting here is interesting and deep, an Australia even further dealing with social issues thanks to superpowers, and Syl at the intersection of so many different things. And yet for all the various ways that the setting brings in a sort of magic, the story is much more grounded in the day-to-day, in the mundane extraordinary as it were. Syl is relentless in pursuit of their independence and their passions and trying to protect those they care about. They show their love in small ways, in the healing of a paper cut, in the easing of small burdens. In just being there, even when being there doesn’t do much good. There are always hits coming, reasons to get out and protest even when it’s complicated by their pain, but instead of living each day bracing for impact they push forward. With their relationships, with their education, and with their life. Even when it’s in danger of being snatched away because of one random chance, one misinterpreted word or gesture. I love how this all comes together into this very intimate story about life and community and perseverance. Syl’s life is not one spent in worry or doubt. It’s spent doing what they can, doing those small things because those small things add up. Just as small people can add up into something huge and unstopable. Into a movement. Into a moment of history. It’s a story about hope in the face of injustice, and the power in the momentum of small acts to accomplish great things. An amazing read!

“Lessons From a Clockwork Queen” by Megan Arkenberg (6141 words)

This is a strange and rather surreal story about clockwork queens and the humans that move around them. It begins with a queen named Violet and her attendant, and then an assassination, and then a contest, and then love and love and love and more misadventures and by the end it’s a little difficult to say all that happened. It moves a bit like a fairy tale, not linearly in the traditional sense but always catching up with itself and then bounding ahead, introducing new characters only to lose them, sometimes to pick them up much later. And there is a magic here, an innocence that contrasts with the darkness of the piece, the people being stabbed in the heart or poisoned or lost in rivers. There is certainly the danger of a fairy tale, where death is very much a part of everything, though it might not mean a true ending. It also plays with the idea of morals in a fun way, making each section of the story its own moral tale with a lesson to be learned, and the lessons are all rather ridiculous, not what anyone would really want to take away but pointing out that in these situations the very idea of slapping a moral to a story of real people is insulting. The lesson is always that hindsight is 20/20 but otherwise best not make mistakes or you’ll end up dead, and however you tie that around it still leaves these huge gaps large enough for people to fall into, to be lost into. The story of Violet and Cassia, though, is where everything rather falls into place, where everything in the story dovetails into this lovely and strange and magical story of people overcoming the calamities and randomness of their situation, the silly callousness of their setting, in order to have something together that is beautiful and solid and if not eternal then nearly so, and anyway much better than the eternal of the clockwork court which isn’t eternal either, so yeah. It’s a fun and touching story and an excellent read!

This story is a wrenching and beautifully minimalist story about loss and grief and going on. It features Rion, an Artificial who is living in a settlement of humans when a great tsunami comes and kills all of the human inhabitants. Alone, he cannot grieve the way humans grieve and so beseeches the world, which in this case is a vast linked Artificial called Sovena, and demands to be given the ability to grieve, and along with it, perhaps, the ability to die alongside those she cared about so deeply. And here the story almost mirrors those like Pinocchio where the main character yearns for some part of humanity while still seeming to be fully able to feel the way humans do already, and yet require that further transformation to match their outer reality to their inner truth. Rion is transformed, and lives as a human, in flesh, making a family and learning what it is to go on living even when it seems impossible, even when the reason for continuing isn’t readily clear. And after fifty years she goes back to confront Soverna about what happens and learns a new shock, and is forced to face the pain in her past and the new pain of her present and the prospect that there are some things that cannot be forgiven or punished away. That some losses are always losses and leave scars, even as some sort of healing is possible. And it’s an emotionally resonant and powerful story that imagines pains as large as the world, injustices that don’t have easy solutions, and emphasizes not the need to forgive but the need to be compassionate. Rion shows just what compassion is and through that leaves a path forward, one that includes life and the hope of some day making the world better and easing the old pains without adding to them. It’s an amazing read and you should definitely check it out!

This is a sharp poem about expectation and reaction. About the election. About watching what happened and becoming something because of it. Changing. Changing to suit this new world that was suddenly revealed. Not that suddenly arrived, but that pulled away a sheet and showed underneath that the way that we had thought the world would work...isn’t how it works. Wouldn’t be how it would work. And so there is this change for the narrative. This transformation. And it’s one that makes all sorts of sense, that this turn of events requires something where you aren’t really sure of yourself or your body. Where it has to remake itself into something more dangerous and more defensive. I love how the focus in the third and final stanza is about fear. Because that’s what so much of this is about to me. The narrator is faced with the reality of their transformation and yet declares that they aren’t afraid of it. And to me that rings true. That it’s not the transformation here that is frightening. It is completely reasonable, and indeed rather necessary. The frightening thing is what prompted this, what seeded this. Was those moments of blistering fear at the onset. And now the fear has died back into something else. Into anger and a need to do something. Into becoming a weapon that can fight back against this attack, into becoming a shield to defend those who cannot transform in this fashion, who will always be more vulnerable. This isn’t a good outcome in any sense, but there is also a sense that the narrator isn’t just accepting this. They have taken all that fear and disappointment from the election and made it into something useful, and the effort has left them hungry for action, hungry to be doing something with their new form. And it’s a poem that flows well, that builds to that final moment, that final image, and it’s a great read!

This is a lovely poem that strikes me instantly with how well it matches the themes of the story to the form of the story. The piece is written in a wave of text, beginning in the center and weaving from side to side, mirroring the aurora that it evokes, mirroring the dance and song and rhythm that it establishes as the link between the narrator and their lover, who is absent and yet embodied by the lights in the sky, somehow a part of it. The story speaks of the play of lights across the sky and slightly sensual way that they unfold and whirl, but more than that the poem speaks to me of distance and yearning. The lights are sensual as I said but they are also out of reach, visible but not tactile. Like the lover of the narrator, the lights are a reminder of what has gone before, of the promise of what will come after, but are a reminder only. For all that they are bright and moving and beautiful, there is also a cold to them that is matched by the cold evoked looking up into the night sky, at the space behind the aurora, filled with stars, yes, but also darkness and distance. The poem to me is about the approach of the lover, the beauty of the light but the necessity of warmth and connection. The aurora is amazing and powerful but the lover is more than that, and hir approach is like the rising sun that will return a more pervasive light and life-giving energy to the world. It’s a lovely piece that really makes me want to look up into the night sky and see dancing lights. Go read it!