With the march of time and technology, the methods and mediums for telling stories can change rapidly. Though books and more traditional publications still dominate the market, there is growing room for alternative funding for stories, and one of the most popular recent additions to the landscape is Patreon. Already many authors use the site in order to bring stories directly to those willing to pay a small monthly cost. And now there’s a new project innovating Patreon storytelling—a joint venture featuring three writers sharing a setting but with audience participation and a unique feel. Archipelago reveals a speculative past where portals to another world have opened, and with them come brand new opportunities of exploration, exploitation, and disaster. The three authors all have very different takes on the style and tone of the project, but all of them work with each other, creating a gestalt that is more than the sum of its parts. It’s an ambitious undertaking, and a brilliant start, and I’m going to be looking at the prologue stories, all of which are free to read, so that you might whet your appetite for this interested new venture. There’s currently a Kickstarter as well as the ongoing Patreon, and I certainly encourage you to check out both. To the reviews! 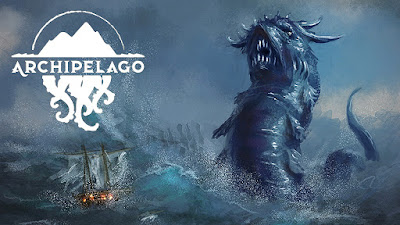 Well that’s certainly a way to open up a project, with the smell of gunpowder, the taste of blood, and the sight of a great tear in reality itself threatening to suck in a British naval vessel operating in the alt-historical Caribbean under the command of Captain Thomas Laughton. The story opens as his ship is engaged in a battle with the Spanish, a battle that goes from smooth sailing to choppy waters to OH FUCK WHAT NO!!! pretty damned fast. The language and general feel of the story are solidly historical, with just a hint of something more going on. Laughton will provide few surprises for fans of the genre, being pretty much what one expects of a British naval officer—collected and professional and competent and really not wanting to deal with the whole portal to maybe-Hell opening up right when he thought things were going well. The rest of the cast is fairly standard as well, with the more solid if less articulate ship’s Master and a Junior officer who seems eager to show what an asset he can be. The a ction is beautifully rendered, too, painting this naval battle with one part professional disinterest and one part this-thing-might-kill-me. It’s a balance that works well and helps to sell the sudden and dramatic entrance of the speculative onto the scene. It also leaves the story on a delicious cliff-hanger, with Captain Laughton and his crew about to enter into the unknown and evoking such fantastic voyages as Odysseus’ fateful trip. Whatever is ahead, the story seems to promise that it’s not going to be boring, and this is definitely a piece to help whet the appetite for more adventure, more battle, more magic, and more world-building. At the moment it’s a big mystery what all this means but my attention has effectively been grabeed and with the promise of different casts and different characters to follow, I’m definitely excited to see what happens next!

Well this second prologue story into the world of the Archipelago is certainly a lot darker and stranger than the first. Having been perhaps lulled into a false sense of security by the naval affair of the previous prologue, this chapter opens with an entirely new set of characters and, well...a pervasive darkness. Front and center is Elizabeth, the viewpoint character, known throughout much of this piece as the Soupmaker. Why, you ask? Well, that has a lot to do with the darkness of the story. She’s part of a group of survivors leaving Jamestown and on their way back to England when a small craft with three men aboard approach them. This little group convinces the former population of James not to leave the New World behind, but to turn their flight to greener pastures, toward the empty settlement of Roanoke. And yeah, that sounds like a great plan. Especially when these men are carrying around strange glowing stones and seem juuuuust a bit off. Still, Elizabeth’s role as the Soupmaker has made her a pariah among the survivors, despite the fact that it wasn’t a choice she made but rather a judgement she accepted from the whole of the community, a bad lot that has made her the object of scorn and blame for what they all participated in. These new men offer an escape from that, and Elizabeth goes with them when they leave for a secret expedition. It turns out that the portal in the first piece wasn’t the only one and these men know of another. And so this installment of the larger story is the first where we actually get to see what’s on the other side. It’s...nightmarish. I gotta say, I’m impressed with just how bad things get how quickly, and I love how for Elizabeth it’s not even that bad. That regardless of how dire the situation is, this offers her a freedom of sorts. To escape the role that was placed on her. To be something other than the woman everyone wants to blame for the horrors of Jamestown. Here we see a bit more, perhaps, of what the mood of the series might hold—at the least it reveals that it won’t shy away from some shocking horror or difficult themes. And it’s a lovely complication after a fairly straightforward first prologue. The world continues to grow and here are its shadows in vivid intensity, which makes for a gripping read!

The final story of the Archipelago prologues brings the reader to yet another new location and yet another new portal opening into the unknown. Here we find Umur, a young man with hopes of adventure and exploration, who gets to witness a strange creature emerge from the other side of the portal, land, and explode. It’s quite the way to open the action! And it does a great job of setting up the piece and getting the tone set early on. Where the first story had more of a military feel, and the second much more grounded in horror, this last piece is much more about adventure. Which is not to say that either the military historical fantasy or the horror aspects have been dropped. If anything, this piece does a beautiful job of bringing both feels from the previous prologues and melding them into something new but also harmonious with the project so far. Umur is an interesting MC as well, a man without flesh and blood hands but instead different artificed hands that he can switch between. It’s something that comes in...hand (oh glob sorry!) when it turns out that an artifact from the other side of the portal has some extreme reactions to anything living. There’s also some humor in this story, something that has been slightly missing from the project to date, and it makes the strange and gruesome and dark elements much more fun and quick. The focus is still on the discovery of the portals, but more than that it’s about using the portal and what can be found on the other side to create new technologies that can be used to tip the balance of power on the historical Earth. The Portuguese, who had appeared in the first story, are back as military opponents, seeking to capture the portal that opens here, but thanks to Umur that doesn’t really go how they expect. This story also takes the action to the other side of the portal, picking up some of the threads introduced in the second story, and it’s still a horrifying experience, and the mystery of what happened on that side of the portal, and what it means for everyone, deepens wonderfully. This really does feel like just the tip of a much larger and more intricate story and I love the different feels and interpretations on the premise, on the world. This story revels in the creepiness of the situation and this new world while still maintaining a hope and wonder and fun feel, and I’m super excited to see where the story goes from here!