Today I'm looking at a special project from Future Fiction featuring two stories by Tendai Huchu. One is a reprint and one is new for the ebook, HostBods. These are stories that both look at the boundaries of the artificial and the human, the virtual and the real. Both stories feature characters who are dealing with family and obligation while also trying to do right by those they care about. In both pieces, though, the environment is full of decay and corruption. The threat of violence and subjugation are real and present and provide the characters with a motivation to try and survive, to try and find a way to endure and, perhaps, reach a better place. These are two stories that take very interesting SFF looks at technology and the end of the world and I'll get right to the reviews! 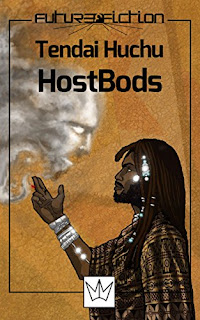 I first read this story when it came out in the first issue of Omenana, and while I did feature it in my December 2014 Monthly Round, it was before Quick Sip Reviews launched so I never got to feature it here. It's the story of 4401, which is to say Simon, a man who makes a living (and supports his sick brother) by being a HostBod, a body that other people can wear around, his own personality and will supplanted by the customer. He's not supposed to be aware of what's happening to his body while he's inhabited, but he does. More than that, a part of the knowledge of those that he links with is left behind after each connection, making Simon a master of many things, a trait that makes him very dangerous, as it's not something anyone expects. He plays his role quite well, knowing what people expect of him, and knowing what he has to do, how he has to act, in order to avoid trouble. [SPOILERS] Except trouble finds him anyway when a rich man tries to buy out his contract and change the rules, aiming to make the inhabitation of Simon's body a bit more…permanent. What follows is a thrilling and fun story that still packs quite the emotional punch. I love how the story establishes Simon and then shows the many ways he's trapped. Owned. The way that everyone around him—his company, the man who buys out his contract, even the woman who seems to want to save him—view him as property. As negligible. He's a non-entity to them, and yet this is something that he's carefully maintained, a ruse that he can use in order to survive. Because survival is the name of the game, and the winner walks away with a huge payout. It's a great premise and the execution here is fast, fun, and hitting. I love the way the piece shifts voice to match the people inside Simon, and how it shows how he is forced to think, how at the center of all of this is just his desire to protect his brother. It was a great story the first time I read it and it continues to be an amazing piece!

This is a story about the end of the world…or maybe the beginning of it. It's definitely a post apocalyptic piece, though, starring a father and son, Jesse and George, who are locked in something of an ideological battle over the fate of humanity. The piece is loaded with religious imagery and ideas as George seeks to play god with a new virtual world for humanity to inhabit, one where things will be orderly and controlled and where people will have no choice but to do better. It's a great way to approach the idea of determinism versus free will, where George is somewhat thwarted by his son even as his plans also failed to take into account so much more. The setting is startling, a world where humanity is down to only a few dozen and living at the mercy of robots who see humans as, well, just as destructive and dangerous as humans really are. Which means putting them into a virtual world seems like a good idea. The rabbit hole, however, goes much further than that, though, and the story becomes a rather metaphysical piece about the nature of reality and existence and godhood and it's a fascinating read that asks the question of how we know that the world around us is real while also saying that it might not matter. It's a story that shows a humanity that is very slow to learn from its mistakes but does not, I believe, see humanity as inherently fallen. These are people who can find the light—it just might take a long time to do it, and I like how the story takes a very complex look at that. For George and Jesse there's the specter of a chance at reconciliation, or at least at a continued love for each other, but there's also the chance to find meaning and purpose and joy in the vastness of the universe that threatens to annihilate all light. And it's certainly a story worth spending some time with. So go check it out!