February has decided that it's going to be very full of fiction, and contributing to that is a special Women of War issue of The Sockdolager. Now, the issue actually contains eight stories, but three of them are reprints and because of time I'm not going to review those, though I do very much recommend people check them out. As it is, there are five stories seeing their first publishing and they definitely capture the theme well. Women are front and center here in all aspects of war—as soldiers definitely and as revolutionary, as monsters and nurses and victims and mothers. These stories focus on family and love and conflict and blood, and they are at times difficult to read because of the unflinching look they take at war. At what it means to go to war, especially for women. It's a wonderful collection of stories, and I'm going to charge right into my reviews! 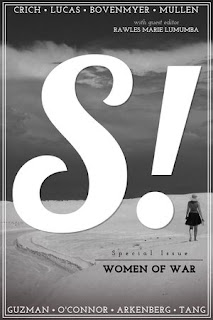 This is a story about revolution and about resistance and about the expected roles of women in society. The story unfolds as the oral account of an uprising against occupation and Blanca, who was a young woman then, is now old and related the details of what happened to a pair of reporters come on the anniversary of the occupation. And the story really looks at where women are places in these stories—how they're allowed to be seen. Not as soldiers, really, and yet women have always fought. Directly and indirectly. Using their hands and their teeth as well as their minds and their wits. For Blanca, a whore at the time of the occupation, she saw the way that it drove people apart and against each other. How people saw her as a traitor for servicing the foreign marines. And yet the conflict also drew them together, made them all into sometimes out of stories. I like how the idea of the ciguapa is used, this monster that steals men’s hearts, because it's both literal and not. It recognizes that the stories is almost always told by a man about men. About how this woman (who the man can't even ultimately decide is a woman but rather a monster) owns her sexuality and her power and uses it against men. It's a position that Blanca recognizes and one that, by the end of the story, becomes about more than just sex and sexuality. It becomes about power and violence, and how any woman who owns that, who decides to fight, stops being seen as a woman. Becomes a monster to the eyes of men who could not imagine this. And it's a dark and layered story that shows the power of narrative and voice. That as long as it is others that control the story, women are erased and sidelined. But because Blanca gets to tell what really happened, an entirely different picture emerges. It's a great and powerful read!

This story also looks at gender roles and the ways that women can be exluded from certain areas because of a belief in "separate spheres." In this case the story follows Jala, a young woman following the path of a soldier, whose friend Willhemenia is froma culture where women cannot be soldier. And the story follows Jana as she grows resentful both of Willhemenia's culture and her as a person, Jana's feelings about her friend complicated by the roles they are each expected to play, by the ways in which both of them both reinforce and break down the notions of gender and ability. And I love how the story dives into Jana's feelings, showing that she's disdainful of Willhemenia and yet also comes to a place where she's defining some of her own gender and gender roles as being different than Willhemenia's, that when Will begins to break out of these traditional notions of gender Jana isn't sure what to do, is angry because she doesn't know what to do. It's an aspect of identity and gender that's not always portrayed in fiction and SFF and I'm glad to see it here, that there are ways that even people claiming to be progressive police gender and expression and identity, the way that Jana cannot at first accept what Willhemenia is doing, who she is, because Jana feels her own place is tenuous, even though she is the best soldier in her class, male or female. And I like how the story slowly shifts that distrust and anger into something else, allowing Jana to grow and drop some of the rigidity with which she regards herself and Will and the world. It's a piece about growth and about maturity and acceptance. It's also a fun and rather romantic story that is a delight to read and a truly resonating story for me. Definitely go read this one immediately!

This is a story about coming home and not being able to come home. About running away and finding yourself out in the world, free and strong and powerful, and then coming back to the family you ran from, to the place you ran from, and seeing how it feels. For Shilla, it means more than just uncomfortable talk, though—it means completely hiding the identity she worked so hard to build on her own, which just so happens to include being a war hero and dragon rider and scores of other things. Traveling back home, she faces what she left behind and opens up a few old wounds. In that the story is bittersweet, because it's about the times when family isn't enough. When it's not nurturing or helpful or loving enough. When it fails and when the right decision is to strike out on your own. And that is a difficult thing to do but story does a lovely job with it, showing the grief that Shilla feels and also the joy in her new life. There's a part of her perhaps that wants to show everyone what she's become but she also knows that it will mean nothing if they don't respect her, if they don’t really care for her. And revisiting home just confirms that they won't, tbat her life is fully her own, which has its own loneliness but also its own beauty. That she has created herself new and found a life she finds rewarding and fulfilling, but one that she'll never be able to share with those who raised her. And I love how the story treats this as sad but not Shilla's fault, not for leaving and not for being herself. That the loss might be shared but the real blame comes from those unwilling to accept that people can step outside the roles prescribed to them. It's an interesting bit of world building and a great, affirming story. So go check it out!

"We Are Still Feeling" by Karen Bovenmyer (1568 words)

Okay then. This is a tense and violent story that moves with the speed and power of a bullet through the brain, obliterating and confining and freeing and just really intense. It's focus is on Kummer, a person who is able to use brain matter and a latent ability to control the dead bodies of people they knew in life in order to fight against the relentless onslaught of machines bent on human eradication. It sounds like a huge war but the story shows only a very small part of it, Kummer on a mission to retrieve some intelligence, caught and hiding while those bodies she controls, those people that she knew, are killed again. And she feels every moment of it. And fuck, yeah, this is not a story for the squeamish. It is a story that looks at the horrors of war and both what humans are able to do and to endure in times of war, when survival is the best case scenario. Stories about wars with machines aren't exactly rare but this one brings a level of visceral terror and violence that just makes it work. It's hyper-violent and about the trauma and that Kummer endures, the hope and the despair and the way that they are wounded and will never be made whole after this. It's wrenching and it's difficult to read in places because of how raw and bloody it is. Because it shows the stakes of this war and just yeah, fuck, this isn't a conflict of half-measures. There are no prisoners here, no rules beyond the drive to kill and to survive. And through it all the story also has a certain grace to it that is eerie and only makes the violence more jarring and real. It's hard to recommend everyone go out and read a story so steeped in carnage, but I must say it is a great story and a memorable experience.

This is a rather moving story that makes for an interesting coda for the issue. Here a young woman argues with her mother, who has always been a bit overprotective, always a bit judging, in part because the mother found herself in a bad situation and doesn't want the same for her daughter. But the daughter, the main character, finds herself swept along in the wake of war. Trying to do something for the effort that will be enough even as she feels it isn't. She falls in love. She ends up in a bad situation. She goes forward. There is a great sense of cycles here, the way that people and especially women can't always protect the next generation from the same pains, the same complications, the same injustices. And yet the story is also hopeful, showing that not all stories that seem sad end sad. Not that every story is a fairy tale with a happy ending, but that sometimes burdens can be eased, situations made easier, lives changed for the better. And some differences and pains can lessen with time and maybe, just maybe, they can be healed. The story doesn't really get into that, doesn't show it happening, and I think that I like that, because not only would it make it a longer story but I think that given the pacing of the story, which is a bit softer, a bit slower, having some sort of confrontation and feeling of things being "fixed" wouldn't feel right to me. Instead, the story leaves the scene set for something that will take time, that will take compassion, that will take effort. It's a softer ending and it fits the story and brings the issue as a whole to close on a bit of hope and a bit of love. A great and fitting way to wrap things up!