It's my second month of reviewing Glittership and February brings a pair of original stories that mix caution with wild abandon, curiosity with extinctions. The tones of the stories are quite different, the first piece fun and free and the second more tinged with grief and a suffocating anticipation. And where the first story looks a future where people bound forward with a rush of enthusiasm, the second story holds back, the whole world wincing as people wait for the next shoe to drop. Both stories, though, capture a bit of what makes humanity interesting. Our resolve in the face of adversity, yes, but also our creativity, our curiosity, and our passion. And both stories show that the human spirit resists cages, and yearns to find people to connect to, new adventures to experience. So let's get to the reviews! 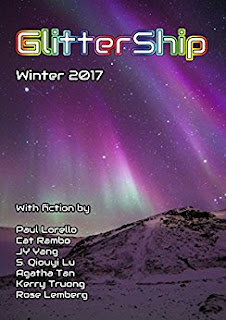 This is a very short but incredibly adorable story about two members of what must be an archeological expedition finding an old machine and letting nature take its course. And really it is a wonderful exploration of human curiosity and the addictiveness of discovery, of tempting fate and luck. [AND OKAY SPOILERS] I just love that the reaction to finding this slot machine is to somehow know its function. At least for Jalzy, who is immediately drawn to the machine, the reaction is some sort of innate knowledge of what ey's supposed to do. It's a rather tried and true premise, really, people from the future finding something from the past, but the story does a great job of not really moralizing, not saying that people in the past were stupid for gambling or for wasting their time/money/etc. on something like a slot machine. Instead the story focuses on the ways that things like slot machines speak to something that might be a problem if left unchecked and unchained (gambling can be a serious problem) but that also speak to part of what makes humanity great. That thrill to know what a thing is and, more than that, the idea of taking a chance. A gamble. Because the story takes place in a future it means, after all, that humanity made it that far. Despite the way things seem to be going now. And I don't think humanity will be able to get to any future without embracing our curiosity. Our sense of discovery. Our sense of play and fun. And this story captures that so clearly, with these two characters who obviously care for one another but who are also great foils. Because for all that Jalzy's friend, Alliq, tries to be something of a wet blanket, xe doesn't really stop Jalzy from acting. Because, somewhere below the surface, Alliq is curious too. And it's just a fun little story that does its bit and takes its bow and you should definitely check it out!

This story imagines an Earth overrun by aliens. Or…overflown with them? Great floating creatures that consume the moisture in the atmosphere, that can't seem to be stopped. And for Kira these creatures, these Slow Ones, seem a heavy and inescapable presence, on that she can't understand how people don't face, don't see constantly. And yet life goes on. Those people still with jobs still go to work. The cat still gets fed. And yet… I love the way that the story shows these creatures, these aliens, like the invisible hand of entropy. Like they come to represent recession and that slow draining that destroys people and relationships and hope. For Kira her marriage already seems doomed, her husband laid off and without much of a care but douchey in the way that he performs his uselessness. Not with a resolve to do something but with a dramatic ennui that seems pointed at Kira for the fact that she has a job and isn't dropping everything to see to his feels. And I love the way that Kira confronts that by [SPOILERS BIG TIME!!!] just embracing the moment (and another woman, her boss). The whole world seems doomed and Kira is tired of just letting the fact that it's happening slowly stop her from taking drastic action. Not "let's nuke 'em" action, as a certain country in the story decides to do (guess which!) but drastic positive action to make herself happy. To make herself feel good. Even if it's only for a moment. Even if the world ends the next day. Because these small allowances, these small acts of self care, are defiant in the face of extinction. And the story just captures that feeling of being in a slowly dying place to well, of being bled by a million paper cuts. And it equally captures that moment when you decide not to let it own you, when you decide to laugh at it all and get off because you can and it feels good. So yeah, an excellent read!