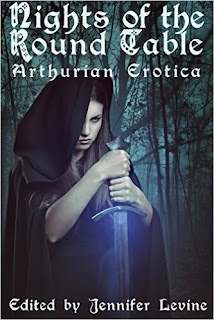 So after a very long wait (for me, at least), my story "Questing" is now available in the Nights of the Round Table: Arthurian Erotica anthology. This was actually my first erotica sale from about a year ago, and also the story that I've probably done the most editing to once it was accepted.

It always surprises me how much erotica and romance tend to ask for edits. At least, some of the time. This story especially was tricky because it's Arthurian but set in the present day using a variant of my headcanon Arthur myth. Namely, the knights are all "immortal" following drinking the grail, and they keep getting reborn into new bodies. In this story things are kept pretty simple because it's a standalone and because I didn't really want to get into too much. Mostly I wanted an excuse to write a fun story featuring Lancelot and Palomides. Palomides is one of my favorite knights because he's always in the background, always getting beat by the Top 4 (Lancelot, Tristram, Lamorak, Gareth). Of course, he's also one of the only knights to best most of the Top 4, which means he's quite high on my list of best knights.

He's also just a lot of fun because being always on the outside of greatness looking in, he always has something to prove. I try to think when planning more contemporary stories how who the characters were in the original stories would evolve to who they are today. The Lancelot, that means a man obsessed with the game. With the quest. That's how I saw him most of the time anyway, not really caring about Guinevere but caring about winning her. About winning in general. And that's still the same, though his game is now the Game that he plays with his faction of knights who want no part of holding to old hatreds. Old lusts…well, that's something else. Because while Lancelot is not one to keep it in his pants, I see Palomides as much more willing to wait for the right moment. Which is where the story opens.

I will admit that I chose the quest I use (searching for the Questing Beast) both because it ties into Palomides' back story (as the Questing Knight) but because it does look a bit like a Hodag depending on descriptions. And I'm a big fan of Hodags. So I get to mix Northern Wisconsin tall tales with Arthurian myth. And sex. Quite a bit of sex. So this was a lot of fun to write and I'm very glad that it was picked up. I'm a little bummed that the anthology is ebook only but them's the breaks I guess. I still had a lot of fun writing it. It's not exactly how I'd set up a non-erotic Arthurian setting, but it's getting there. The Game is part of my headcanon. And I do like Palomides and Lancelot together, at least for a fling. I will admit that I don't see the relationship lasting, but while it does I see it being quite steamy. I see Palomides being the one to break it off, and I see Lancelot never quite getting over it. But ah, the stories I will likely never write.

So yeah, definitely go and check that out. It's fun and sexy and has a little bit of non-sex action as well as Palomides and Lancelot confront the Questing Beast. But I hope it's cute and fun, mostly. Indeed. Thanks for reading.