For the December issue of Urban Fantasy Magazine, the theme seems to be moving on. Moving on from abuse and trauma. Moving on from the safe world of childhood magic. The stories take very different tracks, but both features moments of chaotic violence nestled into stories that are slower, that show the unraveling of something that seemed to take up the whole world and are revealed to be only a beginning, a jumping-off point. An opportunity to make a fresh start. So make a fresh start with some reviews! 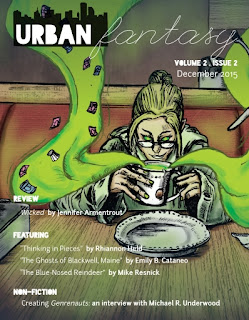 This is a quite interesting story about vengeance and thinking and what it means to be whole. The plot of the story is simple enough, that a woman who used to be Virginia was used by a sorcerer, that he was taking her mind in order to stop aging and so when he took hers she learned to think in pieces, taking first bees and then crows in order to carry out her revenge. She meets another young woman along the way, also trapped by the sorcerer, and together the two of them do what they can do. The striking part about the story is the idea of thinking in pieces, a concept the story sells well, builds with the distracted nature of the narrative, the way that once-Virginia stays to her task, holds to her truths, herds the crows to take her where she needs to be, to try and save someone instead of just killing it all and disappearing. And, more, the story does a nice job of building her journey from one of revenge to something else, to one of healing and helping. She lost something, and it would be easy to imagine the story ends if she gets her revenge, but there is so much left, and the story explores a bit what it means to be saved from abuse and torment, the need for assistance and the ways people can start to heal following such trauma. A fine story!

"The Ghosts of Blakwell, Maine" by Emily B. Cataneo ( words)

This story seems to be about moving on, being alive. It's a story about ghosts, yes, and about the main character, Jo, being stuck. In the past, with the dead. The layering of the story is done quite well with that, Jo being a bit of a shut in who cares only for her ghosts, four dead girls who she's brought to live with her at her family's home. Only her family wants to sell the home and Jo has to deal with not wanting to go. Not wanting to go and yet having to see the ghosts she's cared for reject her. In some ways the story uses a very harsh view of Jo, who doesn't feel comfortable with the living, who wants things like she remembers, like she's always known them. Her reliance on the dead for comfort is framed as destructive to her, as unhealthy. [PERHAPS SOME SPOILERS] She doesn't get to come to terms with growing up as much as she is thrown into it, pushed away from those she loves, which throws into question if they ever really loved her. The story brushes against what I think of as Millennial fiction, showing a woman wanting to opt out of life, to hide away in something magical and safe. When she can't, when she is forced to face the "real" world, she realizes that she was hiding all along, that she was wasting away, that she is relieved to be able to leave. It's an interesting depiction and one that I think works in the end, showing her struggle with her own feelings of inadequacy, her own identifying with the dead. The past is a nice place to visit, basically, but you can't live there. Indeed!