Ahh! Apparently I completely forgot about Farrago's Wainscot, which came out in October (curse you OCTOBER!!!). Instead of skipping it, though, I'm just going to treat it like a December release. After all, it has a rather trippy Christmas story, and all the stories deal with the ways in which fiction can effect the real world, the ways in which art make reality. And, of course, there is more weird than you can shake a stick at. What fun! To the reviews (and sorry I missed this in October)! 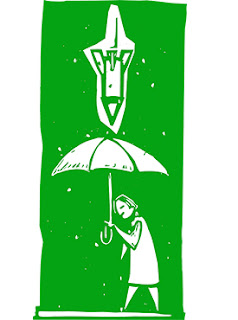 Well…way to sell that weird in the first story and sell it hard. This…this is a metatextual sleigh ride through science fiction, about science fiction, about the ways in which science fiction is shaped and manipulated by people and the way that science fiction can shape and manipulate reality. But fuck is this not a really odd story that mixes "real life" with pure fantasy, positing a black Samuel Delany Santa Claus and a world that isn't quite so bound by rules as all that, but only because it's a story, admits it is a story, and runs with that idea. And my brain hurts. In the best of ways my brain hurts from reading this story. It's like a very dense essay on literary theory crashed into a political science fiction novel and whole mess fell into a cauldron of high quality drugs. I can't pretend that I followed all of it because it evokes some serious figures in theory, but I like to think that I could follow the feel of the story, and that's rather an accomplishment given the insanity that unfolds. What I'm left with (aside from some motion sickness and vague confusion) is an idea of science fiction that invites engagement, that wants to change the world and can. It's an interesting story and very worth wrestling with. Indeed!

This story centers around loss, around missing children, and around the appearance of a clockwork boy to sort-of fill the gap where the children were. The main character lives with December, I'm guessing their partner, and the two of them lost their three children who wandered off into a blizzard. Five years later they still have visions of their children but no trace of them beyond that. Instead they have June, a clockwork boy who stays with them, who might not be real. The story is filled with a quiet hurt and longing. The characters want a return of their children but are not sure if hope is appropriate. The story is also something of a mystery as the main character discovers just what June is. The ending rather throws everything into doubt but also kind of answers all the lingering questions that abound in the story. Where the children went. Who June is. What will happen next. I found drawn to the idea of clocks and time and people, to why the children were stoking a fire and what it meant, literally and metaphorically. There's enough that the reader can guess for themself, and it's an interesting and moving piece, softly done but still powerful.

Well shit. This story, told as a grant application/project proposal, is some seriously dark business. Like, seriously dark. It follow the plan of one person to reach a new divinity, the former God and patron saint of the town, the patron saint of lost things, no longer actually answering prayers. I love the way that prayer here has some expectation of success, the way that there are figures for it, number and charts and addendums. I love how it's a matter of bureaucracy, how the story uses that form to slowly unveil a plan that is shocking and daring and bleak as hell. For a while I almost thought that's where it was going, too, toward devil worship, but it doesn't. It does something different, something new, trying to use art to shape the cosmos, to make the new gods pay attention. Through that this is the story of one person losing a child because of a car crash and perhaps fracturing a bit from reality. The narrator is not exactly reliable, but still paints a compelling case for this project, for trying something. Sometimes it does seem like all one needs is an actual god out there to answer those prayers that seem to get lost, and the story captures that idea and complicates it, marries it to art. It's a dark and twisted path, but the story makes it beautiful all the same.

"The Warehouse of Dead Daughters" by Nick Mamatas (3724 words)

Rounding out the weird this issue is a story about mothers and daughters, a story about the victims of fiction, of stories, the invisible women and daughters who pile up. I've seen a few stories recently that have tackled the idea of how television and movies and books leaves swathes of women dead and graveyards full of dead children, but this story manages to do something different with it, to show what that disappearance can look like, the little ways that people are put away into that warehouse. How women live with different constraints, how parents fail to protect them because they're part of a culture that doesn't value girls or women. That sees their worth only as victims. And so the story goes, a rather disturbing slide of a mother who doesn't really want to protect her daughter to be standing with a gun in her hand a choice to make. The story is well told, rather disturbing, and with a flow that works, the relationship between mother and daughter easy and natural and yet there is something lurking there, something dark and immense that both realize is there. Mixed in is a sort of meta-analysis of the story as it unfolds, the story narrated from the ending, everything leading to that moment of uncertainty at the end. A very unsettling moment, and an effective way to close out the fiction.

This is a poem about longing and belonging, about wanting to be somewhere else, somewhere far away. On the surface at least it concerns wanting to be abducted by aliens, wanting to leave the planet and wanting to volunteer for that because it would mean escape from the history that drags them down, from the inheritance that is their and that they don't (or at least the narrator of the poem doesn't) want. The poem is told in rather short lines and in mostly couplets. The couplets help to evoke the idea of pairs, of a pair, the narrator and the you of the poem, the we that they become. This unity is them together against the oppression around them, the disapproval or the interference of their families, their pasts. Space then is unwritten, and even as abductees will get away from the weight of their fathers. Only there is a sense that there is no real escape, that even among the aliens the weight remains, and the poem ends on a single line, that implication that the pair might not remain, or perhaps that the two must overcome their hesitations to merge. As with many poems (and especially those from this publication) I'm not entirely sure what to make of it all, but it's a moving poem, one yearning for something, some release, and finding in the ending a glimmer of that as well as restrictions old and new. Indeed.

"Milk and Roses" by Abigail Welhouse

Well this poem is an interesting trip through the literal and the metaphoric, a one-sided conversation the narrator is having with the universe, with the reader. About skim milk, about poetry, about comedy. I will admit that I found it rather funny, and I like the meta layers that it gets into, the way that poetry (and most writing) acts on one level purely literally but especially for poetry there is the expectation of metaphor when that's not always the point. The poem can literally be about skim milk but it's also about something else, about the tendency to press meaning onto words, about being persecuted for having preferences, having to defend liking skim milk because many people (myself included) don't like and some (not myself included) go out of their way to try and question and harass people for their preferences. It happens. I have been interrogated, for example, for not liking skim milk, for preferring at least 1%. So I get on a purely literal level the bit with the milk, and comedy, and place and pizza. And I get that the poem, even if it literally does no more than address milk, is doing something deeper and different as well, not metaphor exactly. But it does become about whatever the reader wants, what the reader feels. Poetry is a mirror in some ways, a funhouse glass, and that's why it's beautiful sometimes. The style and the writing of this poem are playful, fun, and definitely thought-provoking. A fine read!
Posted by Charles Payseur at 1:00 AM