THE SIPPY AWARDS 2017! The "There's Something in My Eye" Sippy for Excellent Making Me Ugly-Cry in Short SFF

The 3rd Annual Sippy Awards keep right on moving! That’s right, the SFF awards that no one asked for and few pay attention to is back! I’ve shipped my favorite relationships, and I’ve cowered in fear before my favorite horror stories. Which means that it’s week it’s time to reduce myself to a small puddle of tears somewhat resembling a functioning human being. yes, it’s time for...

Bridging past to past, this piece tells the story of two men separated by time and violence and chaos. Two poets, they were to each other teachers and torturers, inspiring each other even as they hurt each other. The story looks at war and the marks it leaves, and the ease with which vulnerable people can fall victim to those with power. Difficult and tragically beautiful.

Featuring a man who moves through life with a romantic relish and finds that the world is not nearly so kind as it could be, this story traces the gravity of violence and hate and the tired ache of yearning for something different. Ultimately, the story for me is about wishes, and about trying to avoid becoming the monster everyone wants you to be.

“If a Bird Can Be a Ghost," Allison Mills (Apex) (Short Story)

Swirling around ghosts and loss, the story features a young woman put in an impossible situation—expected to help others move on when she herself is stuck in grief and longing. About learning, and about the ways that learning can’t prepare you for some things, it creates a stunning picture of life and death, love and longing.

About wounds and scars, this story features two men two come to rely on each other, bonded by their mutual need. As much as they could be to each other, though, there is a deep sorrow that stems from their reluctance, from the way that the main character will sacrifice everything for a beauty he cannot fully be a part of. 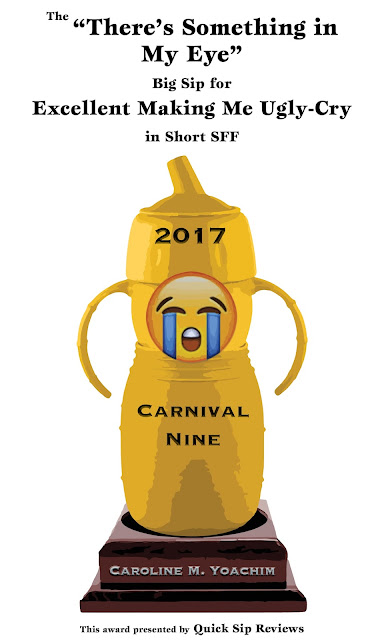 That life isn’t fair is something that often gets told to people, especially children, to get them to stop complaining. But, as this story shows, life not being fair is something that can be made unbearably worse is society as a whole decides that life shouldn’t be fair, that the best way to act is selfishly. Building a clockwork world where unfairness is accepted and institutionalized, the story proceeds to break my heart again and again, showing how such a system only rewards not just the lucky but the consistently lucky, crushing everyone else under the weight of thankless labor that most never see the benefit of. It’s a bleak setting made wrenching by the way the main character begins so full of hope and faces again and again a world with unchallenged faith in a creator who has no care for justice. Even so, the way the main character still pushes forward, still works to create something rewarding and good for her family, is breathtaking and inspiring. It’s not an easy read, but it an uplifting and devastating experience that yes, had me crying at the end.