THE SIPPY AWARDS 2017! The "I'd Ship That" Sippy for Excellent Relationships in Short SFF

It’s 2018! Which means that I’m already behind on reviews! But it also means that it’s time for me to pay homage to all of 2017’s amazing short SFF with the THIRD ANNUAL SIPPY AWARDS!!! It’s truly the awards that no one asked for, but I’ve never really let that stop me. There are five categories in the Sippy Awards, bunched around themes rather than length. I’m kicking things off today with one of my favorites. It’s time for the 2017…

I’m a bit of a sap at heart. I mean, I write ridiculous and super-queer superhero romances, so that might be obvious. But relationships go beyond just romance, beyond just romantic partnerships. Friendships, family, and more help to make relationships one of the most important aspects of storytelling, and short SFF is no exception to that. So today I’ll be highlighting stories from 2017 that I think did an exceptional job with regards to relationships of all sorts. So without further delay…

This is a radiant story that imagines a very different way of looking at relationships, because it seeks an approach that isn’t possessive, that is ultimately freely and constructive and healing. Because without that at the core of interpersonal relationships, the relationship between humanity and the Earth erodes, and falls to ruin. Just so good and romantic and yes!

A Portrait of the Desert in Personages of Power, R.B. Lemberg (Beneath Ceaseless Skies) (Novella)

An absolutely stunning look at the budding relationship between Tajer and the Old Royal, but also about so much more than that. The Old Royal finds themself drifting toward isolation, weary of company, and the story really looks at the importance of peers, and trust, and companionship. Also it deals with magic kink and introduces Marvushi and you just really need it in your life.

Deeply romantic and starring two trans boys dealing with some big issues of trust and hope, the story features not only the amazing relationship between the two young men, but a lot of stuff with family, bargains, and larger social networks.

Fandom is an interesting place and this story does a great job with Computron’s relationship with fandom, with the texts and, more importantly, with the other fans. It’s about building networks and finding meaning and fulfillment in enjoying something with other people. A beautiful and fun story! 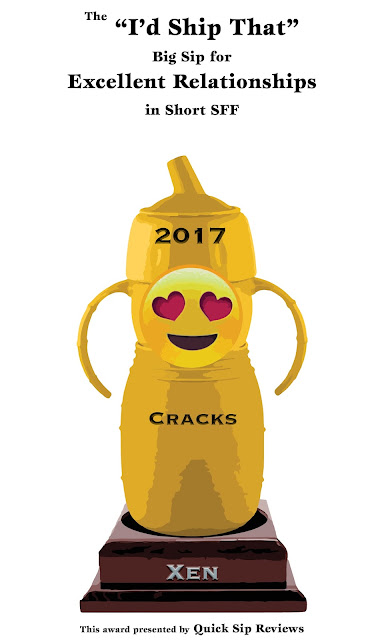 I love so much about this story, but the relationships are what really sell it for me. The relationship between Asad and his brother, between Asad and his mom, his role, his alternate selves, and, ultimately, between him and the prospect of hope. The setting is chilling and heavy, and I love the way the story approaches exhaustion and despair, the way that Asad is certain that, for all he has people in his life, he can’t fully come into his own without exploring that part of himself that his family cannot help with, that they might not even accept. It’s a wonderful story and it just works for me, thanks in large part to the relationships it explores. Go read it. Seriously.