January is off to a hot start at Flash Fiction Online, with three stories that explore identity, erasure, and embracing the present. In each of the stories, a character finds themself poised at a frightening moment where the rules they are used to living under are taken away. For one, the rules are protective, while for the others the rules are stifling and harmful. The stories all explore how these people meet this moment and find a way to embrace the world without these rules they were so used to. The stories range from science fiction to fantasy to just slice of life, but they all are interesting and compelling and I should just get to the reviews already. Let’s go! 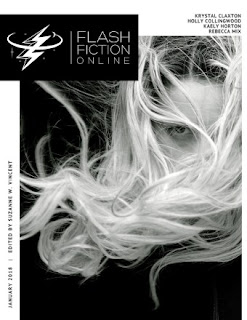 “The Solid Years of My Life” by Holly Collingwood (964 words)

No Spoilers: A person, part of an experiment on human freezing, slowly wakes only to find things are...different from when they were frozen. Charming and with a growing sense of realization, apprehension, and mystery, the piece builds nicely and maintains a dry, sarcastic voice.
Keywords: Cryogenic Freezing, Survivor, Aliens, Science!
Review: Sometimes science just doesn’t go as planned. For the main character here, the experiment to cryogenically freeze them should have lasted only a few months, and they’re eager to find out what they missed when they’re finally thawed out. Unfortunately, it seems like someone’s playing a joke on them. Either that, or a lot has changed since they went under. I like the voice and the tone of the story, the almost bored, but certainly uncomfortable feel that the main character has in being thawed. For them, the experiment has been a success, and while there was a risk in what they did, it’s mostly just business as usual. How quickly that changes and becomes something completely different, is something that I like about the story, that the almost hum-drum mentality of science as fact runs smack into science fiction, and everything starts really moving after that. It captures the sense of fear and doubt quite well, the weight of what’s happened hanging by a thread above the main character’s head, but all the while there’s also this sense of discovery and hope, and as long as they’re alive there’s still more to do. It’s a fun piece with a great style and an ending that had me chuckling even as I wanted to know what happened next. A great way to kick off 2018 at Flash Fiction Online!

No Spoilers: A woman has a difficult talk with her grandmother only to feel she’s not really getting through. Heartfelt and warm, the story explores how some people feel they have to erase aspects of their lives to make them palatable for family, and what can happen when they decide to stop censoring themselves.
Keywords: Queer MC, Family, Coming Out, Slice of Life
Review: This is a super sweet coming out story where the main character wants to stop erasing her girlfriend from her weekly talks with her grandmother. Things...don’t go exactly to plan, and I love the way that the story portrays what’s happening, not about the fear of violence so much as the fear that this revelation will damage the relationship between the main character and her gram. This is something that can weigh incredibly heavily on people, that they have to censor themselves to provide a manicured version of their lives devoid of queerness. And especially with coming out to older family members, there’s this fear of not exactly being rejected, or kicked out, or disinherited, but rather of being treated _different_. And I love how the story builds up that fear in the main character, the awkwardness that both the main character and the grandmother have, both perfectly aware of what’s going on but neither knowing really how to act. It’s a story, for me, about embracing who you are and taking the risk that people who care about you will accept you, celebrate you. Even when it might be weird at first. And the relationship between the main character and Rachel here is sweet and wonderful, romantic and also a partnership where they have to turst each other and rely on each other so that they can move forward, sharing in all aspects of the other’s life, never erased or invisible for the sake of someone else’s comfort. It’s just a wonderful little story that packs a lot of feeling into a small space and shines with hope and love. Go read it!

No Spoilers:Rona watches a dragon attack a village and struggles with the rules she’s been taught by her abusive guardian. Much darker than the other two pieces this issue, it focuses on difference and power, on rules and the reasons for rules. Intense, full of pain, but with a captivating beauty like watching a flame dance.
Keywords: CW- Abuse, Dragons, CW- Self Harm, Fire, Escape
Review: Digging into much darker territory than the other two stories of the issue, this piece is about abuse and rules, about Rona, a young woman who has been told by her “mother” that she must avoid fire, even as she’s drawn to it. The story does a great job showing that struggle, the conditioning that Rona’s gone through to try and control her, to try and steer her away from her nature. She stifles herself because of the pain she has to endure otherwise, but the piece also reveals how at some point there really is no path for Rona that even minimizes pain. The act of trying to avoid who she is, trying to deny it, is a harm that her “mother” tries to make lesser than the physical beating she will endure if she disobeys. But that only makes her try harder, and in the end she doesn’t really have a choice. There’s a great sense here that there are some things that go beyond what parents can try to beat out of their children, some bits of who Rona is that cannot be erased. In that sense, this is a story that resonates with the rest of the issue, where Rona must finally embrace her true self not because it will be easy or painless, but because it’s her way out of the abusive situation. Like with many things, it’s a physical escape that allows for the true realization of who she is, and that only happens when she’s afforded a small bit of safety, a sort-of promise that she doesn’t have to go back. The rules break because they don’t fit, because they never fit, and there’s a great rush of relief in the ending, that Rona won’t have to go back. It’s a haunting piece because of the abuse it reveals but it’s also a triumphant piece about someone realizing who they are, even if that’s uncomfortable for the people around them and even if that’s uncomfortable for the reader. It’s a complex moment but I think handled with care and power. A great way to close out the issue!