I was sorely tempted to take my Thoughts this week and try to capture some of my feelings surrounding some recent happenings on Twitter but should probably be grateful that I have a new publication to talk about instead. That's right, my story "Defying Gravity" is out now in Dreamspinner Press' Starstruck anthology. Which, the theme of the anthology is basically m/m romance with a celebrity element, so I couldn't really resist making the main character a superhero of moderate success meeting a guy who wants to be his sidekick. Hijinks ensue. 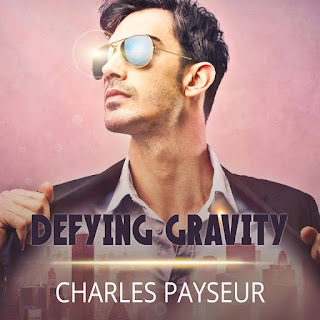 Part of what I love about writing superhero stories, and especially superhero romance stories, is that I can revel in the ridiculousness of the genre tropes. These are stories that feature superpowers and villains with rather peculiar ways of doing business and instead of bringing on the grit I decided to go for more of a…well, faux-classic feel. High drama and talking gorillas and giant, universe-destroying shark gods. And a bit of a romance thrown in for good measure. The main character is Gravity who, as you've probably guessed, has gravity powers. Largely unexplored gravity powers, though he's been around a while and has enough of a following to crowd-fund his living expenses to superhero all day. Which, I couldn't help but imagine what modern superheroing would look like, how people with powers would be able to live free of corporate sponsorship. Crowd funding seemed like a good bet.

I think I love this story a little too much. It's rather over-the-top and saccharine but it's also unapologetically fun. When I say that I write smut to keep myself sane, this is the kind of story I mean, that's just unambiguous and happy. I get to write happy queer love and that's rather amazing, given that it's not often I can find something so…positive in SFF. And hey, I don't always want to write happy fluff, but sometimes I do and this is my outlet. Deal. And okay, so smut always has these forms to fill out for blurbs and things like that (which is also something that SFF lacks), and this story probably has my favorite descriptive text I've ever given to a story. Basically: [SPOILERS]

[SERIOUSLY SPOILERS!!!] Gravity meets Bruce, an eager gentleman who wants to be his sidekick, and immediately starts having troubles defeating the villains he's always had no issue with. Accelerator. Gorillord. Small time stuff. He fears his attraction to Bruce is making him weak but nope, turns out that Bruce only showed up to try and help because Bruce's evil twin brother couldn't stand his attraction to Gravity. Turns out Bruce's twin, Clark, is SUPER STRAIGHT and feels that his twin being bi somehow implies that he's bi as well (BECAUSE THAT'S HOW TWINS WORK I GUESS) and is out to destroy the main object of Bruce's perverted lust: Gravity. Cosmic shark gods are summoned, Gravity learns how to accept and ask for help, and Clark is a complete asshole. Things happen and resolution with kissing probably. [OKAY SPOILERS OVER!!!]

This is what I live for sometimes. There's also a ton of little easter eggs and bits of world building going on because I can't resist when it comes to superheroes. Indeed, I liked this so much that I have a related story appearing in December as part of Dreamspinner's Bah Humbug Advent Calendar. There is a supervillain and his boyfriend and all the attempts to destroy Christmas and I just love writing these so much. I'm thinking of further fleshing out the setting with future stories as well (and who knows, if this is popular at all maybe something longer still). For the moment, though, this represents my first step into this world. And for fans of not-erotica (notrotica? enotica?) it peaks at kissing so is more just these two guys first meeting and getting involved (for fans of yes-erotica, the Christmas story includes some much steamier bits).

Anyway, indeed. This was probably much more pleasant to write about than thinking about trying to engage on Twitter and then being told I'm wrong and just don't understand and all my priorities are stupid and I don't think ahead because I'm too emotional and all. Because yeah… Thanks for reading!