The two fiction works in this issue of Fantastic Stories of the Imagination are solidly urban fantasy, exploring how the creatures of myth and legend live among "normal" humans. These are, to me, stories about abuse and about struggling to overcome abuse, to stop it where it is or at least try to stop being a part of it. The worlds presented are mirrors to our own, where the magical elements are hidden but for those who know to see, and it mirrors the way that abuse in our world is often invisible, lurking. Both stories do an amazing job of creating compelling plots and characters and complicating the traditional folklore. It's an excellent issue that I should just shut up and review! 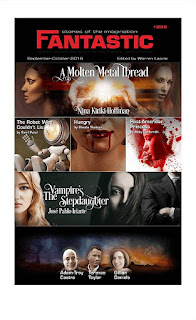 This is a fun story about toxicity and friendship and the corrupting influence of power. In it, Amerit is a half-jinni who is drawn into the machinations of a woman who can control others with her voice. Who can bend people to her will. And the story is about bending, about being flexible and being affirmed and having the strength and support to break the chains of toxic cycles. It's also a rather fun urban fantasy with a character I'd love to read more about. The action of the story begins in a classic way, a character long out of the magic game drawn back in to help an old friend who has fallen on hard times. And by fighting for her friend, Amerit rediscovers how much she enjoys magic, how much she should celebrate herself, and how much good she can try to do with her gifts. Also how much ass she can kick when it comes to teaching a manipulative asshole a thing or two about using people. I love Amerit's style and the way that she has learned to cope with abuse, with manipulation, never quite answering the way she's supposed and so giving herself enough room to work, to wriggle free of the trap laid out for her and by doing so finding a way to help herself and her friend. It's also about how abuse works, how those who have been abused sometimes learn how to be abusers and the fear of that and the hope that maybe it's not always the case. But it's a fun story and an interesting world and a great central character and you should definitely check this one out.

Well eff. This story takes a brief but rather interesting look at vampires. At the lore and at the implications of the lore as experienced through a woman perpetually sixteen years old who was turned by her stepfather. There are parallels galore for what happens in the story, and all of them become about assault. Not necessarily sexual but to me definitely swirling around that given the time of the turning and the way the story runs, the main character in a sort of denial about her situation, forced to view it as normal and not think too much about it because she's been kept as basically a child, unable to really grow up, to really find her strength despite being much older than she looks. It's not until the main character meets someone, a college-age woman who she wants to be closer to, that she's forced to really examine what's happened to her and what she's done and what's been done to her. It's not a happy story at all to me but it is one that shows a character waking up and taking action, finally recognizing the harm that's been done to them and the harm they take part in by their inaction. It pairs quite well with the last story, too, in that both explore these urban fantasy settings about these people, these creatures, living among the general population, and how those forced to hide are effected by their difference. And while the last story showed a character able to celebrate her nature, this one shows the reverse, a character who cannot revel in her vampire nature because it is one that is tied to abuse, violation, and theft. It's a powerful piece and another excellent read!
Posted by Charles Payseur at 1:00 AM