The Strange Horizons Fund Drive continues with two more weeks of excellent content, featuring two stories, two poems, and a nonfiction piece. There are also nice previews of some of the initiatives that Strange Horizons will be running or hopes to be running that are worth checking out but that I won't get into here. The pieces from these weeks, though, seems to deal heavily with both history and heroes. Looking at the myths we tell, about the way in which history and narratives mix and mingle. There is a strong Greek mythology vein that is explored in a number of the works, and larger than that they all explore old wounds and newer efforts to heal and make right the injustices of the past. And the pieces are touching and interesting, complex and heavy. It's a great collection of works that I'm going to get to reviewing! 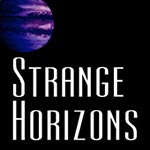 This is a very different superhero story than I'm used to and that's a very good thing for me. Because this is a story that looks at heroes and at war and people. At what war and power does to people. I love the aesthetic of it, too, the way that it makes real all of the rather ridiculous ideas of superheroes fighting in "real" wars, the Captain Americas and Human Torches trying to punch Hitler in the face. It takes these characters, these people with powers, and looks at them after the war. Just after the war and much later, at the end of a different kind of war, the Cold War. Spit and Whirlwind are two heroes who are waiting to help their governments with a transfer. Of a war criminal. Of a man who can heal people. A man who could do good, but is so often used to do terrible, terrible things. And the story looks at that and doesn't let the reader ignore all the implications of it. What he can be used for. What he was used for. And Spit and Whirlwind are there for Queen and country or maybe just to get paid, trying not to think about their powers, about how everything works, about what they're a part of. [SPOILERS] And the way that the story goes makes them and the readers examine their role in all of it. As tools or as people. They were made to have powers, and they've tried to use those powers for good, but there are things that go beyond that. Spit was one to let the healer get away once, because he was healing sick people. Injured people. And yet what he did…the story does an amazing job of building this world so like our own and questioning what a hero is. What a hero should be. A tool or a person? It's an uncomfortable read that is fun in as far as it's about superheroes and battles and power, but it's also a complex story about morality and war and it's definitely worth spending some time with. An excellent read.

This story takes a look at mythology and curses, destiny and fate, and tells a much different story about heroes than the last piece. Here the idea of heroes is still central, but it's a much more masculine idea, a more…"classic" idea (in the Greek sense), where the hero is pretty much always a man and the women of the story are secondary, are just pieces to be moved around the man. They are the jilted lovers and the faithful wives and the oracles, but they are never the heroes. Even in their own stories they are eclipsed and shadowed by the heroes. And in the story Dido, who loved a man and rebelled when the gods demanded that they submit to their fate, is living in a city and trying to mend the cracks that she caused long ago when she tried to get her lover back, when she hoped to drive him back to her. And I like the way the story shows this healing as also an erasure, that what she's been doing has in some ways been to fill the roll the gods wanted her to play because if she didn't she was punished. And yet the way around the punishment is not to give in but to rebel further and to take away the support of the other women in the story. Because without them the gods have no real power. That if they refuse to go along with the hero's journey then the journey has to change. Then maybe they can be their own people with their own stories. But they have to take it, because it's not going to be given over to them. They have to band together and act, and it's a powerful message in a story that is dominated by isolation and pain and trying to break through the fog of loneliness that pushes Dido on her quest. It's a fun read and a complex, resonant story. Indeed!

"Athena and Yeshua" by Gillian Daniels

This poem is one, to me, that looks at religion and the strategy of religion, at the conflict of it and the love and the violence. It sets up a rather unique idea, that Athena is in love with a rabbi named Yeshua. That it is her that helps him rise in popularity, in power. And it's a great complication of both deific figures, Athena and her vision of war and wisdom and Yeshua and his endless compassion. There is a sense here that Athena basically becomes his PR manager, that she helps to shape his message, and yet it is not, ultimately, a message of peace. That the wisdom she offers is geared toward war, as she has always been a god of war, a being who was born fully formed with armor and weapons. And in some ways, then, this poem to me becomes about how these newer religions came to be used for war, are a tool of war. And in that it makes a lot of sense, because of how religion has been used to justify conflict, to justify war. In that the love Athena has for Yeshua makes complete sense, because he represents this pathway to conflict, crafting followers who will fight and fight and give Athena the blood she wants. And it's an interesting way to see the progression of religion from more pantheon-based traditions to Christianity, seeing how the one informed the other and tainted the message of peace and love with this darker undertone. It's a fascinating exploration with a stunning final image and it's well worth a close reading. A great poem!

This poem seems to take aim at the myth of the Fall of Troy, and more specifically the relationship between Achilles and Patroclus. It circles around the way that the myth is interpreted, or at least to me the poem is at least as interested in modern reactions to the myth as with the myth itself. The poem is broken up into small section-stanzas which range from language that sounds taken from an ancient poem or play to language that sounds taken from critiques or reviews. And in that I can certainly sympathize with much about this poem, which I read as being at least as much about how people recoil from the idea of queer relationships in the past, in a past where they have sought to erase such relationships, such feelings. It's a way of demanding that the past conform to some modern modesty and morality that is not only laughable but incredibly dangerous and harmful. Like placing leaves over the genitals of statues (or, I guess, just chiseling the offending body parts off) or paintings, erasing these relationships from the pasts and from more modern retellings, has real consequences now. Because it doesn't allow people to see themselves in the past, doesn't allow people to see that there might be a better way, that there have always been queer relationships and loves and they are some of the most storied in history. That Achilles and Patroclus remain at the center of the story of the Fall of Troy as much as Paris and Helen. That their love is no less real because it is not popular or polite by modern standards. In any event, that's how I read the poem, as a way of pushing back against erasure, against intolerance. I might be completely off, though. Still, it's a poem I quite enjoy and one I recommend everyone spend some time with!

This is a great article about shape-shifting and shin in short SFF and also a nice themed list of short SFF recommendations that deal with the subject. The article takes a look at the different ways that skin is used in SFF to deal with anxieties over identity, with the struggles to see oneself, with that moment of disconnect between a person and their own body, how they're perceived and how they perceive. It's an interesting and deep exploration of that, As it states early on in its examination, "We can properly see our own skins only in the moment of estrangement." That for many skin isn't something that they ever really have to think about. It is there and it does what we need it to do. The only times that many have to worry about it is when it is broken, is when it is torn. The article does a great job of looking at how, while many don't have to really think about their own skin, for others this ignorance isn't entirely possible. Because of how skin is perceived, because of how we are taught to perceive ourselves, some live with a near-constant estrangement from their skin, normally brought on by having to live and exist where one's skin doesn't really fit in. Where it is different and is treated as different. The stories chosen, after all, pretty much all deal with shape-shifters as rare, or at least not the majority. There is a sense that the characters, the shape-shifters, must navigate both their inner selves and trying to exist in a world where they are at risk. And it's, again, the article does an amazing job of looking at how that works across multiple narratives while getting at some of the overarching concerns and realities these stories seem to touch on. It's a fascinating piece and an amazing read!
Posted by Charles Payseur at 1:00 AM