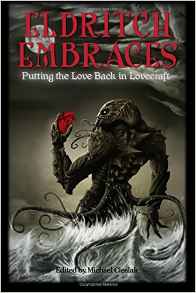 So apparently the Dragon’s Roost Press anthology, Eldritch Embraces: Putting the Love Back in Lovecraft has released. I do not have my copy yet but it seems like it would be a chunky tome and I’m super pleased to be included in the collection. The story is “Alexa” and really wasn’t originally written as a “Lovecraft” story, but when I saw the call I made some alterations and here we are.

And okay, so “Alexa” is one of those stories that has a very clear inspiration, though in a few parts. First, it is a story that is part of my continued efforts to get published at Shimmer Magazine. I have been a fan for quite some time and many of my stories are designed specifically with Shimmer in mind. Which tends to work out pretty well for me even if I have never gotten into Shimmer. This one did get a nice rejection and perhaps was part of the reason that mermaid stories are now listed as hard sells. Because it is kind of a mermaid story. Or a merman story?

The second part of the inspiration is the Billy Joel song “Downeaster Alexa,” which is a great song and that I personally find rather creepy and provocative. Like the main character in the song, the fisherman in “Alexa” is living with the reality that fishing is becoming more and more difficult. He wants to keep his boat but he also has responsibilities on land and he’s trying to make a balance. The main character of the story is the person the fisherman meets at sea, the last of a once-great population who fled the encroachment of humanity and its pollution. The story (I hope) is about longing and about price and a bit about the environment. As it has been altered to make it more appropriate for the collection, there’s also a bit more to tie it into existing Mythos, but I think the heart of the story remains.

This is one of the relatively few stories I’ve had accepted that racked up over ten rejections before finally placing, though it did receive very nice notes from Shimmer (as I mentioned), Farrago’s Wainscot, Fantastic Stories, and Lackington’s. I first sent it off in January of 2015 and it was eventually accepted in August of that year. It’s a bit sensual for a non-erotic story, and is probably more explicit than I typically go with my non-smut work, but I loved the idea of telling a slightly erotic tale through the lens of a Billy Joel song (because I am weird). I just quite liked the idea of this guy caught between the pull of the ocean and the land. Salt water and blood. Heteronormativity and embracing his bi-ness.

And okay, it probably doesn’t exactly end all that happily for everyone involved. But then, it’s a story about crushing loneliness and distance and pollution and denial. I still rather like it, and hope that you do too. Unfortunately it’s not available for free online, but a portion of all sales does to help out a nonprofit engaged in animal rescue and no-kill shelters. Which is definitely something to support. Thanks for reading!