So something a bit different today, as I'm looking at a not-really-spec publications called The Sun Magazine. Or, rather, I'm looking at the piece of fiction it released in its March issue. Why? Well, a few reasons. First, I was asked by the author, whose Terraform SF story I was a big fan of last year. And because I'm in that time of the month where publications are all holding onto one or two stories yet so it's either let a Thursday go with no new review or else pick something new. And I'm quite glad I decided to read this story, as it's challenging and deep and really rather uncomfortable. It's fantasy, or maybe science fiction, but whatever it is the story is a great meta-fictional experience worth checking out. The story is excerpted online and available for free in the digital edition of the magazine. Definitely go read it. For now, though, the review! 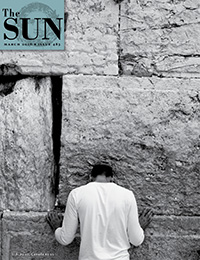 [THERE MIGHT BE SPOILERS IN LIKE ALL OF THIS SO BE WARNED] Okay then. Well shit, this is a deeply uncomfortable but moving story about a woman, or two women, dealing with loss and with difference and with identity, pushed into being something they aren't, pushed into a sort of fantasy world but not the one they want. Not the one where they can be free and be themselves. Instead the fantasy world is one where they are happy with what they have, drugged into accepting an abusive relationship as the best possible option. It's a story about depression and about leaving and about pain and desire. And fuck is it dark. But it's also poignant and moving, a picture of a woman in a relationship that is essentially killing her, where everyone tells her that she has to give up her fantasy life, has to give up her dreams, in order to please her husband and be a good mother. The expectations that are heaped on her beat her down, kill her energy and her wonder and her hope. She is left having to rely upon a magic pill to "fix" her, to make her complaint, and it's all done incredibly well.

I have a soft spot for portal fantasies. They evoke a sort of childishness, something that the author plays with directly, and in some ways the author also plays with the fourth wall, creating a persona that becomes a character in the story, trapped as well. In some ways the story might be autobiographical in ways but as that's a bit presumptuous to assume and beside the point to me as a reader, what it does do it create parallel plots, Amber's journey into Mere and the "author"'s journey. Both stuck in marriages that suffocate them, sexual lives that torture them. I love that the name of the portal world is Mere, as well, as in mere fantasy, and yet for the characters those fantasy worlds become more real than reality, a place where they actually exist. In their "real" lives they are erased, and in some ways their erasure mirrors how they feel out of touch with reality, disconnected because they are expected to interact with a reality that does not recognize them. Where they must be deviant and dangerous and sinful for being themselves. It's a story that's heartbreaking and elegantly depicted, that shows the characters' struggling against the overwhelming force of convention, of oppression.

To speak a moment on one of my pet reader things, I would definitely not classify this as "Millennial" as I have defined it in the past. Indeed, though it is a portal fantasy this story wonderfully subverts the idea of opting out, complicates it by showing one form of opting out (going to Mere) and another, much darker way (taking a pill that makes you "content"). And it works in asexuality and convention in a way that implies even opting out is cut off from people for whom the traditional portal fantasies hold no appeal. There's just so much going on in this story, which blends genres and creates a pervasive weight that is palpable and expertly rendered. Definitely go check this out. Trigger warnings for mental health issues, suicide, and abuse, but it's an amazing story. Indeed!
Posted by Charles Payseur at 1:00 AM