So two new stories from Urban Fantasy Magazine this month, and a return to solicited pieces. Which...well, I'm not actually all that sure how to feel about the solicited story. Which is the polite way of saying I do know how I feel about it, but...well...I have no real experience with the writing of the author outside a few short stories in anthologies, and...well, the stories this month couldn't really be more different if they tried. Seriously, one is a heartwarming story about family and the other is...about revenge. They are a little jarring next to each other, to be honest. But to the reviews... 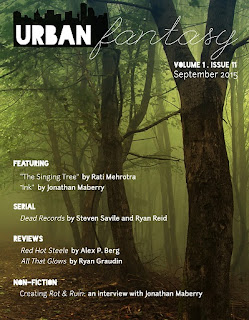 Well this is certainly a heavy story, one about a family going to visit a magical singing tree, one that bloom but once a year. For Kitari and her family, it is a ritual to go and hope to hear it sing. Of course, this year is a bit different, as Kitari's sister, Ria, is not in a good way. Having tried to kill herself before, she's frayed, hurting. The story does a nice job of building the family, of making them real and alive. Mother and father, Ria and Kitari, the twins Jade and June; all of them fit together, a family even as the idea of family seems insufficient at times. For Ria, certainly, family is a double edged sword, filled with people who don't quite understand what happened and in many ways blame her for trying to kill herself. And yet they are also there, also trying to heal the damage done, and they seem to know that they can't force it, that they can only try and hope that trying will do something. And in the magic of the singing tree, in the magic of their love, a small amount of healing is accomplished. The story leaves an awful lot unsaid, Ria's troubles and fears and hopes not exactly on display though the story is more about her than anyone else. Instead the story is about the family as a whole, about Kitari and her own insecurities and loneliness, the way she misses her sister and the way everyone has to learn a slightly different way. Because while families can be comforting, they can also be cages if they are unwilling to shift and change. It's a rather sad story, really, but one with a warm, gooey center of familial love. Quite good.

I will say this: this story does an excellent job of making the...antagonist of the story seem really deserving of what happens. [PROBABLY SPOILERS FROM HERE OUT] The story is set up as a revenge tale, about a man finding and torturing a different man responsible for the rape and murder of a woman whose ghost has contacted the main character for to get revenge. And the story really wants to make sure the reader understands who the villain is and how much they deserve to be tortured and killed. Not only is the person a murderer, they're a racist. But not just a racist, a Hitler-loving white supremacist. They're a rapist, but not just a rapist, a violent (good honest) rapist who then tortures his victim before he kills her. And the good guy, though he's also torturing and murdering people, is only doing so because he's sought out by victims, is asked to avenge them. Which...makes me uncomfortable. Because aside from the fact that the story leaves no room to view the villain as a human being, it also makes this story about a white man avenging mostly women, and mostly women of color. And the story takes the same care to set these women up as virtuous in a scale to the heinousness of their killers. They aren't "asking for it" in any way, not wearing anything revealing, not being lippy, not going into dangerous situations. They are mothers trying to protect their children. They are preyed upon by monsters. So they seek out a white man to get revenge for them, but not for them because these women aren't selfish either. They don't want revenge. They want to protect people from these monsters (which makes the torture the main character meets out to his targets...well, really not necessary). The story plays with the idea of justice. The idea of the main character being an avenger. And yet...the plot, in seeking to very much justify it's vision of justice, steps into almost every problematic trope about victimization there is. The main character literally speaks with the voice of these dead women while being in complete control, stripping them of their agency and making their deaths about him. He's not being driven by an outside force. He just wants to hurt people and gets to because of a warped idea of justice that is divinely backed up, by thinking that further torture will somehow erase the torture that has been done. I get what the story is aiming for. People want to see the bad guy pay. There is a definite visceral reaction the story achieves in depicting the graphic rape and murder of a black woman by a neo-Nazi. But...but then the story takes that event and makes it about the main character's quest. His pain. His justice. And that...well, I'm not comfortable with that. It reads as quite problematic to me. The story does not seem to be complicating the idea of revenge or victimization. Or rape or murder or torture. It seems to me to merely be using them as elements to try and stand in for emotional impact, to try and be gritty and entertaining. And the story did impact me. Just not...how I think it wanted to. So perhaps go into this story with something of a warning? Or perhaps miss it entirely.
Posted by Charles Payseur at 1:00 AM