Regular Sips - Sorrow of the Cthulhu Spawn by Alex Ness

So today marks the first time I'm reviewing not a magazine publication (gasp!). I was asked to review this collection of poetry, prose, and art, and as it looked pretty interesting I agreed. I'm not sure how many of these I will do, but probably if people keep giving me interesting things I will continue reviewing them. So here begins Regular Sips, which will denote anything that I'm going to review that is not a multiple-author collection. Onward! 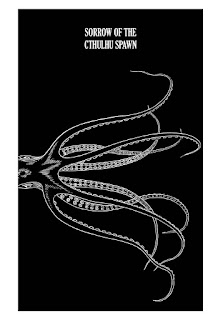 Well I can say, without reservation, that this is quite an ode to all things Lovecraftian. It's a collection that combines poetry and prose by Alex Ness with images by Caspar David Friedrich and motifs and themes made popular by H.P. Lovecraft. In that it does an admirable job of capturing the feel of much of  Lovecraft's work, evoking the sense of cosmic dread and insignificance which humanity constantly struggles against. Now, I have complicated thoughts on Lovecraft, which I think is true of most people now who read his works. There is a certain uncomfortable responsibility that goes along with enjoying his stories, because I'm terrible at divorcing what I know about an author from an author's work. But I cannot deny that Lovecraft's thoughts on horror and his mythos are things that I think are still worthwhile to explore with a critical lens.

So with that lengthy preamble, perhaps I should examine these stories, poems, and images. Far and away the poetry dominates the collection, and to fair effect. It certainly comes at the Cthulhu mythos from many different angles and taking from different stories. Night Gaunts appear, as do enormous and forgotten cities, as do the various deities that Lovecraft conjured to fill the dark and maddened places among the stars. The style is fairly straightforward and can get a little repetitive at times, but is quite readable and feels Lovecraftian. The structure of the work as a whole was a little confusing, though, as the pieces have no titles, only numbers and I wasn't quite sure if they were supposed to be read as a sort of continuous piece or separately. If taken as a unified whole, as one epic, then the narrative seems to lack a central force or structure, more a moving tapestry that visits the body of work that Lovecraft put out. Instead of that, I chose to read the work as each part individual from the next, as a collection of poems and stories linked by subject but each standing on its own.

With that, mileage from poem to poem and story to story varied somewhat. There were some poems I felt really hit for me, the language beautiful, the images strong and tugging at that veil of normalcy that stands concealing the Elder evils of the universe. Some of the time, though, the repetitiveness of the themes and language made some of the poems land a bit softer. This is certainly an ambitious project, an entire collection of Lovecraft-inspired poems, but because there is so much here, some of it seemed redundant, and having pieces that retread the same ground made certain later sections of the collection drag for me. That said, the opening is fairly strong, and the work as a whole does make excellent use of the Caspar David Friedrich images, which carry a nice blurry touch of the sublime.

I think the collection does manage to capture some of the feel of Lovecraft through an alternate form, using poetry and image to draw up the Deep Ones from the depths. As an ode, an homage, it works, but how much it works as an enjoyable read is probably down to how much the reader enjoys the source material. For Cthulhu fans, this seems a fun project, a nice encapsulation or supplement that many people are probably hungry for. Aside from using a combination of poetry, images, and prose, though, the collection does mostly retread ground that Lovecraft mapped in his stories. That seems to be the point, but for those looking for further thematic complications, the collection is a little light.

Still, in the end I liked the collection. The combination of elements made it varied enough that reading it was no chore. And it was different enough from most other Cthulhu tie-in materials that I was intrigued. Again, I'd recommend it for people interested in finding more Lovecraft-inspired fiction and especially poetry. It seems more of a "by a fan, for fans" project, but definitely not a bad one. I, at least, was entertained throughout. Hurrah!
Posted by Charles Payseur at 1:00 AM