Hey, the newest issue of Omenana is out! Always an exciting day, namely because Omenana is new and so far has never been disappointing. There are always stories that surprise me, stories that enchant me. This issue is once more a mix of science fiction and fantasy, and for those who think publications shouldn't cross genre lines, I'd say "Shut up" but also "Look at Omenana and try to tell me it isn't incredibly successful at capturing a coherent feel." The issue does an excellent job working as a whole, the stories all adding to a larger thematic narrative of growth and seeking, seeking connection or forgiveness and perhaps not quite finding it, but giving the feel that there's time yet, hope yet. It's a very good read. So let's get to it! 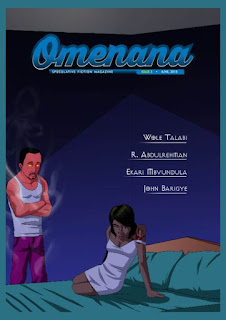 This is a rather dark tale about guilt and about trying to atone for sins committed in folly. The main character, Montague, is dying. As surely as he is painfully breathing, he will not last long. But he is desperate to finish on last thing, one last invention. Something perhaps to make up for all the pain that he has caused. As a slave he had designed machines of torture, machines of death, machines that were used on children. And while it wasn't really his hand that fed the children to the devices, he was the one punished for the crime, the one sentenced to the dungeon where his health fails. Still, he has managed to make something, and it is that drive that gives the story its darkness and its power. I liked that the story never really forgave him for his crimes. Pointed out that he was a slave and that his master, who made him do everything, only got fined, yes, but it doesn't make Montague a saint. It still shows him as working, as in some ways needing this terrible treatment to make up for what he did, for not resisting when he should have. And so with his last efforts he creates something that will help people, that will lift people up. It's a great twist, or turn at least in the story, because here I was thinking this was going to be some way to get revenge. And perhaps it is. Perhaps this one invention will do more to his enemies than anything else, will shake their power with something so small, so seemingly simple. Because sometimes it is the simple inventions that most change the world. A dark and fitting story.

This is a strange and rather funny story about a man who gets into a motorbike accident and ends up in time. Or in Shaha at least, a place where time is prepared, where the days are counted and everything is supposed to run smoothly. James, the man, is not having an easy time of anything, on the verge of breaking up with his girlfriend because of some bad decisions. He sees in Shaha an opportunity to cheat a bit. To game the system by stealing a day, stealing the day his girlfriend was going to break up with him on. There's this easy style to the story that just works, that fits with James and his ability to roll with the punches. He's a fun character, full of life and quite capable of making some truly awful and not-thought-out-at-all decisions, but even with that he feels a little sympathetic, a guy I felt was on the verge of learning from his mistakes without quite getting there. It's a fun story, James discovering time and battling with its guardian, a small black cat. And the ending is fitting, things definitely not working out the way James imagined because of course. There is a part of me that imagines that this is only the start of some larger adventure, that his stealing a day will have some unforeseen consequences, but that's for a different story perhaps. For this is, it's fun and it's worth checking out.

This is a slow and beautiful story about how lives can build together, how people making the best of their situations leads on and on. It's not exactly, to me, about things getting better. For many of these characters, things don't get so much better. The story follows five people at moments of their lives, tracing a forced migration from African to America and then more voluntary migrations, north to Michigan, then to the distant planets of our own solar system. The story is not really about Progress, though. It's about choice and the lack of choice. The first character chooses to walk one way to a farm instead of another, which leads to her being taken by slavers. It's not really her choice to be taken, nor is it her fault for having chosen the road she took. Instead, the choice of hers that mattered was to not die, to not give in. To keep struggling in the face of horrible circumstances. It is a recurring theme, that these characters define themselves not by the choices they might seem to make (choosing to board a ship to the New World, choosing to turn to avoid cucumbers) but by the choices they make with eyes fully open. To try and create a better world for themselves, for others. And in the end the choice that is left to the main character, which of two landing sites on Europa, is not really the choice to pay attention to. Instead it is the choice to press on, to explore, to make the universe a better place. It is that choice that defines the migration, the strength to never get lost in the things that are out of the characters control. Instead, when they can, they make the choices that will best help them. A very good story with a lot to unpack and examine. Go read it!

The last story of the issue is also the shortest, but manages to still cover a lot of ground, focusing on a man who is half jinn, a man who is able to take fully human form but who can't escape his heritage. He burns too hot, his passions making his fiery nature quite literally too hot to handle. It's something that he desperately wants to overcome, because he has a love he wants to be a lover but can't risk touching her. She is  impatient, though, assuming that he's being romantic when he says he's too hot for her and not quite believing his story of being not all human. It's a great story, moody and lonely, this man having to be so careful, having to keep his defenses up constantly and wanting so much to connect with someone. The plot of the story doesn't range too far, but this is more a scene from this man's life, a glimpse into his pain and hopes and fears and disappointment. It's a nice moment, and it makes me want to see him out and doing things, deciding how he was going to live, how he was going to channel his feelings. For now he is alone, but it doesn't seem like that would always be the case. Anyway, before I come up with whole volumes of fanfiction about this story, I will say that it provides a weighty moment, showing the dual nature of the character, the fire and earth, and revealing slowly this one moment in time. Quite good.
Posted by Charles Payseur at 1:00 AM