Two stories anchor another fine issue of Urban Fantasy Magazine this month. These stories do a great job of capturing the feel of Urban Fantasy, the magical intruding into the mundane world. Of course, they handle those intrusions very differently. In the first, the intrusion is forced, the protagonist not prepared for what she is confronted by. In the second, the protagonist seeks out the magic, is more or less prepared for what she finds, though she still has much to learn. Both make good use of the magical elements, and are worth checking out. To the reviews! 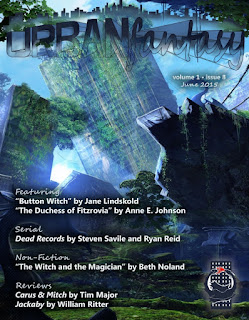 Well this certainly is a strange story about a barista finding herself a little over her head with a customer who is much different than she appears. The story does a very nice job of building to the reveal, of slowly increasing the weird so that no one thing seems too much to believe, even at the end when things really start to hit the fan. It is a rather creepy tale, the barista dealing with the Duchess, a stubborn customer who seems just a bit off. I liked the creepiness of it, like the setting and the characters to some extent. I am, however, a little weird when it comes to motherhood stories, and this one turns into a motherhood story, the story of a woman who just knows what to do when presented with a child (or like eighteen not-quite-children). And I'm just not really a fan of the trope, but I think the story does complicate it a bit (obviously where gooptrolls are involved, things aren't normal). So I still enjoyed the story, still liked the mystery of it, the world-building that went on in the background, quietly. This definitely does seem like the first part of a larger story, of a larger world, but there's nothing wrong with that (and, indeed, that kind of story seems to be rather popular at the publication). In the end, I could still enjoy the story for its creepiness, for its breaking with the expected in making the monster of the story not really all that monstrous and showing that kindness and empathy are well suited to all situations. And most people do not have the same personal aversions as me, so definitely give it a read and decide for yourself.

This is a really lovely story that mixes fairy tale sensibilities with a young woman finding herself in a world that seems to want people to live in perpetual self-doubt. In it Penn, a woman nearing the end of her education and faced with the "What do you want to do/be?" question, finds herself seeking out the Button Witch in order to be granted the ability to hear the music of the universe. She wants to be a composer, an artist, but fears that she's not good enough, that she doesn't have enough interesting to see. So she seeks out this magical source and solves a riddle and gets a wish. And then the story becomes part a "be careful what you wish for" kind of story. Which would be all right, but the story ends up being about so much more than that. It's about Penn owning her own power, her own talent. It's about not self-rejecting because you fear you are not different enough, because you fear you have nothing important to say. Penn is so obviously a rather remarkable person, a composer and an artist, and yet she lets her doubt make her seek out magic. Luckily this isn't a story where she is punished for doing so, and instead discovers that is incredibly capable, stubborn and strong and clever. She solves all the tasks the Button Witch gives her, and does so with kindness and grace and ends up showing herself that if she can do that, if she can do that much, then she shouldn't doubt her art. This is one of those stories that seems aimed a bit at the reading/writing audience, but also to anyone who wants to do a thing. It's about trusting yourself and your abilities. It's about trusting your feelings, what you want to be doing. It's a great story and I loved the comments on buttons, collecting, and magic. There's just so much to like about this story. Go read it!
Posted by Charles Payseur at 1:00 AM