Urban Fantasy Magazine is out again with two stories that take very different tracks into Urban Fantasy. One is alt history and one is a more traditional "fantasy hiding beneath the surface" story with knights and wizards. Really, though, both stories look at privilege and power and loneliness and the power of one person to decide their fate. In quite different ways the stories nevertheless both tackle some pretty big issues while also being entertaining, which is always nice. So before I gush on some more, to the stories! 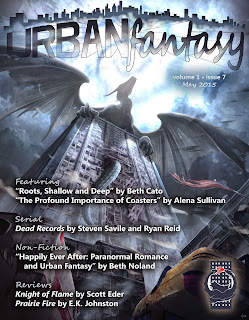 This is a great story of magic set in a railroad era little western town fighting for its rights. After losing a court battle with a railroad over ownership of the land the town was built on, the townspeople are not exactly pleased with the railroad's representatives who are trying to force them out. And then two turn up dead of a mysterious and probably magical illness, and so Evan Harrington, an investigator of the strange and fantastic, is called in to deal with it. Only Evan is really Evaline, a half-fey black woman who can pass for a white man thanks to her fey nature. It's a neat setup, one that gives Evaline some good internal conflict over her ability to pass. Mostly, though, the story is about the sickness, about tracking down a damned spirit and giving it peace. About saving the town from the sickness and the danger. It works quite well, lifting the feeling of a Western but with the nicely worked in magical aspects. Magic here is not something that is unheard of. Many people dabble, and that seemed interesting to me, that this was not the "historical" past but the past tinged with these other aspects. I guess it's an alt history, but an alt history urban fantasy that deals with race and gender a bit and more with loneliness and grief and putting down roots. I'm not entirely sure what the story really says with the ending, aside from sometimes things aren't as simple as you want. Sometimes people feel forced into doing things that turn out very badly. I, personally, don't really condemn the source of the sickness, though it was responsible for killing "innocents." Instead I still blame the situation that made trying anything the best option. Desperation is a powerful force. A great start to the issue.

"The Profound Importance of Coasters" by Alena Sullivan (6871 words)

Both stories this week manage to meld the magical elements of the setting quite nicely, but this one definitely does it with more of a laugh. About a woman, Molly, who discovers some interesting details about her roommate, Ava, the story questions what it means to be created, what it means to have potential, and also throws in some questing knights for good measure. Because Ava is a wizard. A wizard who got tired of the world of knights and quests and decided to get into art. And somewhere in there she made an artifact that captured her ideas about society, an artifact that could rule the world. An artifact that (spoilers!) turns out to be Molly. It's an interesting twist in the story and one that really helps it all come together. Because here is Ava, obviously a liberally minded woman, talking about creating this other woman and speaking of her as not exactly a person. As being fabricated. With the implication, though, that everyone is similarly fabricated. That though Molly literally has the potential to rule the world that everyone has great potential inside of them and has to decide how they're going to use that potential. What they will do with it. Of course, it's also rather problematic that Ava actually made Molly, but the story does a pretty good job contextualizing that and not reducing Molly's agency in the face of this revelation. It doesn't exactly leave Ava looking the greatest, but that too makes a bit of sense, given that she is a wizard and that as a magic user she sort of fails at human morality. But in the end the story is strong, solid, and fun. The voice is engaging and the humor is a nice way of making a story that could have been quite troubling and making it more palatable and meaningful. So yeah, check it out.
Posted by Charles Payseur at 1:00 AM