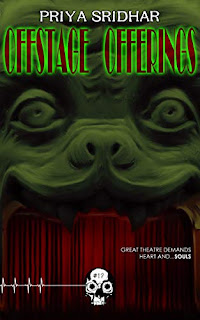 I’m back for a Regular Sip today for a wonderful new novella from Unnerving Books. I’m a little late to the part, as the book came out at the height of spooky season late last month, but given how the world has been, it’s possible people missed it in the chaos. Luckily, it’s a fantastic read whatever the season, and features a haunted theater, a queer woman dealing with crappy employment prospects, and worst of all...kids at an acting camp. The horror! Anyway, before I give too much away, let’s jump right into the reviews!
Story:
Offstage Offerings by Priya Sridhar (novella)
No Spoilers: Vivian is a college acting major who needs a job to afford her terrible apartment. Nights at the ice cream shoppe isn’t cutting it, so when she gets the chance to apply for a job as a counsellor at an acting camp in a historic (and haunted) theater, it seems like the perfect solution. Except her new boss might have made a bargain with some...less than above-board entities for the success of the venture and now kids (and other counsellors) are going missing and Vivian finds herself in the middle of a waking nightmare. The piece is fun and mixes a gentle humor with some much creepier bits. There’s love, death, ice cream, and acting, which makes for an entirely entertaining and occasionally grim experience.
Keywords: Theater, Portals, Bargains, Acting, Teaching, Employment, Queer MC
Review: I love the visual aspects of the story, the way it unfolds in a way where I almost feel like I’m watching the action unfold rather than just reading it. The character work is strong, which is especially impressive given the extended cast of adults, young adults, and kids. It helps that Vivian is just so very relatable, in debt for a degree she doesn’t know how she’ll use, pursuing her passion while running up against the ugly reality that passion alone can’t pay the bills. The rest of the cast, from brash and pierced Harper to more down to earth Drew. From quiet Marceline to troubled Terrance. And, of course, Vivian’s amazing girlfriend Eris, who is always there with comfort food and terrible shark movies. They all have distinct voices and all have their roles to place, the ensemble bringing to life this old theater and its many secrets.
The action builds nicely, too, with the opening scare of the unfortunate (illegal) tour to the relative quiet of the creeping danger everyone is in. The theater is a hungry presence, but also for the most part a patient one. able to work on the minds of the people there. And as it feeds its power grows, and its ability to make people forget victims, and think nothing is wrong, becomes stronger. And it shows the price that comes from desperation. Marian is a kind of sinister reflection of Vivian herself, both women wanting very much for this venture to succeed, both of them in love with theater. Both of them without the money to really make their dreams a reality. And that, too, I appreciate, that the horror of the story is often very practical. The worries ultimately supernatural and financial. Because it takes people who are in trouble, who are desperate, to make the pacts that bring about the tragedy and violence that the story reveals. Marian falling victim yes, to her own twisted ambitions, but also to the lack of funding for the arts that frustrated those ambitions to begin with. What happens when a person’s dreams are snatched away? Well, in this case at least, something more grim and more toxic grows.
And really, I like the way the story both takes the central premise seriously and kind of doesn’t, recognizing that the horror of the situation is walking kind of hand in hand with the theatrics of the theater. It’s exaggerated, it has a nice splash of bloody melodrama. Though intense at times and having a nice heart to it, the piece does evoke certain quasi sharknado things that shows its hand that this isn’t supposed to be the most viscerally terrifying. But it is creepy, and the tension builds nicely, and ending is a bit goofy and chilling all at the same time, reminding me fondly of the Goosebumps-style twists that change things up a bit. Mostly, the piece is a very fun read, entertaining and delightful and perfect for spooky season, which in my book runs all year. A fabulous book!
---

Posted by Charles Payseur at 4:41 AM