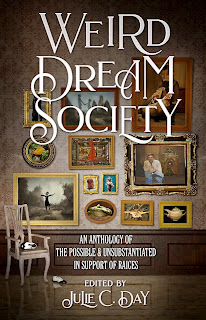 Today I’m looking at a rather large anthology of dark and strange fiction, benefiting RAICES. The stories are mostly reprints (entirely reprints?), but in their curation and presentation they capture something new. There are twenty-three stories in total, from a wide range of authors and genres, but at its core I feel that the anthology is what it says on the cover, a collection of weird, dream-like stories that capture a sense of loss and yearning in their recognition of the grim realities of the world, and those places between our world and a speculative reality lurking beneath it. Few of the stories deal explicitly with immigration, but the project as a whole does turn a critical eye on borders, and the dangers, joys, and devastation that can come from crossing them. The anthology can be pre-ordered now, and will be on sale May 26, 2020.

A number of the stories here were familiar to me already, but placed in the new context of this anthology, even those took on some new and deeper meanings. “They Said the Desert” by A. T. Greenblatt, for instance, is one that stands out to me as taking on the idea of crossing borders, featuring a person crossing a strange desert, haunted by a ghost and torn between honoring a tradition they’re now a part of or reaching for a future where people no longer have to risk their lives to connect two towns divided by a hungry landscape. It’s a theme that repeats, as in A.C. Wise’s “Crossing,” where a swimmer finds herself looking into deep water with longing and pain, afraid of what might be waiting should she embrace her dreams, desperate to find a future where she’s allowed to be happy and fulfilled.

And the dream-like quality of the stories delivers on the promise of the title. From Sofia Somatar’s “A Girl Who Comes Out of a Chamber at Regular Intervals,” where the history or a disaster and the dreams of a mechanical wine-pouring robot mix and mingle, to “The Pyramid of Amirah” by James Patrick Kelly, which features a girl locked in a pyramid, awaiting a religious awakening, the collection as a whole weaves in moments of profound strangeness, places where the rules of the universe seem to bend and buckle. And for me this aspect of the collection serves to capture, without trying to represent the actual experiences of those taken into custody and tortured trying to find refuge, safety, and a new home, the surreal feeling of being trapped in a place and world that seems separate from “normal” reality. Condemned to a situation that feels at turns out of control, powerless, and eager for pain.

There are ghosts of a shopping mall, and little girls with superpowers, and a man who can change skins. There is the dark deliciousness of “Butter-Daughters” by Nin Harris, where desire and the forbidden mingle. And, perhaps most appropriately for the anthology, there is “Application for the Delegation of First Contact: Questionnaire, Part B” by Kathrin Köhler, which does an amazing job of capturing a bit of bureaucracy as it applies to the meeting of peoples. All in all, the anthology presents a great variety of styles and plots, all while maintaining a tonal and atmospheric integrity, a flow that dipped and peaked but remained very grounded in oppression and isolation. There are a lot of broken worlds on display, mirroring the ways that our world is broken, even if we don’t want to admit it, even if it’s more convenient to pretend that any world that allows such tragedies as the one still ongoing at America’s southern border could anything but broken.

In that, my only complaint might be that it’s very much not an easy read, nor an especially pleasant one. These are stories that provoke and demand introspection and care. For fans of dark fantasy and science fiction, there’s a whole lot to like. For others, it might be an anthology to take in bits and pieces, because it is a solid brick of the strange and often uncomfortable. Like the cause it is raising money for, it acknowledges that there are some things that we shouldn’t look away from, that we should have to grapple with and face. And there are still moments of hope and clarity, tucked in among the shattered dreams the collection catalogs. But there’s a heaping helping of sorrow, loss, and grief as well. And while I found it ultimately rewarding and very much worth sitting down with, I understand that there are plenty of content warnings present, so definitely keep that in mind. Still, it’s a wonderful anthology!