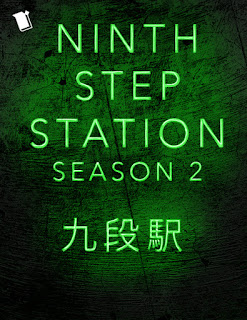 As the second season draws toward the finale, things in Serial Box’s Ninth Step Station are really heating up. Emma and Miyako are both compromised in some profound ways, but that’s not going to stop them and might not even slow them down as they investigate murders in a Tokyo cracked by invasion and occupation. They have to balance the things they’ve betrayed, the people they stand to hurt, and the people they are determined to protect as they navigated the weaving lines of nationalism, corruption, and opportunity around them. And as the half-way point recedes, the season finale starts to loom, with the promise of something Big lurking closer. To the reviews!

No Spoilers: A death at a moving night market reveals a situation where people can place ads for “missing persons.” That is, posters that aren’t about finding someone who’s gone missing, but rather calls for people to make a person disappear...permanently. And if that weren’t enough, Emma and Miyako have to deal with the fact that, following a murder, they check the other outstanding posts and recognize one of the faces--Charles Yardley. Caught between the need to protect a man who is responsible for some terrible crimes and their own desires to see him punished, perhaps even killed, the episode looks at the messy realities of duty and law. Of justice, and sometimes the lack of it. All with the backdrop of a murderous market and a group of very deadly hitpeople who don’t really care about Emma or Miyako’s doubts or guilts.
Keywords: Assassins, Markets, Murders, Queer MC, Organized Crime
Review: I love the premise of this story, that there’s such a public space where hits are placed and assassins lurk, waiting to take new assignments. The aesthetic is fun, and it leads to this dangerous, thrilling situation where Emma and Miyako don’t really know who is out there working to commit murder in their city. What they do know is the target, and I love that the piece finds them having to protect Charles, whom neither of them like, whom especially Emma wants dead. The idea of loyalty continues to be complicated, with Emma having to walk the line between following orders and loyalty to the Peacekeepers, and her desire for justice and need to show everyone that her people are there to help and not just to profit and protect their own power. And the ending opens up the idea that maybe Emma’s done being so passive about all this, that maybe she’s starting to take part in her own resistance, secret from her superiors and even secret from Miyako and the station.

Not that Miyako isn’t hiding her own fair share, and the piece looks at how she’s handling Emma having to protect Charles while dealing with her own guilt and concern for Kaori, who has been absent lately. The explosion of the power ship is still something of an open wound for Miyako, something she comes back to again and again, and I love the way the chapter shows her working to justify what she’s done. To herself. And how that sublimates into anger at Emma and everyone. Because she wants everyone to be as guilty as she is, to be as culpable. She wants to know she’s doing the right thing, but it still doesn’t feel entirely right. What’s coming out of all of this is how similar Emma and Miiyako really are, both of them working off the books to try and work for something that can’t be achieved through bureaucratic means, from “official” channels. Even so, though, they are taking huge risks, and there’s an escalating tension throughout that something is going to break, and break big, sooner rather than later. The thing about secrets is that they have a way of jumping into the light at the worst moment. That Emma and Miyako still aren’t being fully honest with each other continues to not bode well for their partnership, and doesn’t really bode well for Tokyo, either.

Now, as far as mysteries go, this chapter doesn’t really offer much in the way of closure. It acts a bit more like the first half of a two-part episode, and it’s possible that this might already be the run up to the season finale. But the danger is not diffused, the situation not “solved” outside of the implication that this might be more complicated than expected, and might involve Emma in some interesting ways. But Charles is still hypothetically in danger, and Emma still hypothetically assigned to protect him. Though one assassin has been taken out, there are many others yet to be even met, and I’m curious to see where the next episode/chapter takes the action, and the characters. It’s a bite of a larger mystery, one full of death and danger as the station needs to navigate a sea of competing assassins. A wonderful read!

No Spoilers: At a local festival where Miyako and Kaori are having a cute date (and looking at doggos!), a murder cuts short their fun and opens up a mystery with friendship, family, and betrayal at its heart. It’s something that mirrors some of the simmering issues between Emma and Miyako, while also providing a mostly-straightforward mystery that puts the events of the previous chapter/episode on the back burner while still moving pieces in the background that promise to rock Tokyo to its core (again). The details are grisly, messy, and shows Emma and Miyako doing what they’re good at--solving mysteries...and compartmentalization, I guess.
Keywords: Augmented Reality, Embezzlement, Murder, Masks, Queer MC, Festivals
Review: I actually really like the way that this story takes on compartmentalization in different ways. The largest of those is not the way it relates to the mystery itself, the way that the tragedy of all of that unfolded. For me, at least, I really like the way that Emma and Miyako approach the idea, and how that sort of reflects out on the city as a whole. For Miyako, the struggle is almost constant to separate her personal, her professional, and her resistance lives. She’s being pulled in so many directions in ways she can’t seem to harmonize, and everything is bleeding together. Emma is much better about this, and especially with her relationship with Kensuke is able to just use that for sex and not invest any more in it. And it’s something that Miyako has never really approved of, but now she’s seeing why it’s important to be able to do. Just as the city as a whole compartmentalizes, keeping the conflict at arms length so that people can still live, so that not every moment is about the war, about the danger. For Miyako, it’s only once she can just let down the weight of what she’s done with the resistance that she can reconnect with her girlfriend, can start to enjoy her life, which has been very difficult.

Inside the mystery, the idea of compartmentalization is a bit darker, with the characters involved in a murder plot able to use the skill in order to do some chilling things based on their own desire for justice, something that once more mirrors both Emma’s activities in following up on the murder of her old boss, and Miyako’s actions with the resistance. Here there are two people trying to protect each other and punish the guilty, and Emma and Miyako have to arrest them both, noting perhaps the hypocrisy of that but knowing that they can’t let their own transgressions get in the way of solving the mystery. The mystery, by the way, is a return to the episodic murder case, with a definite conclusion and more standard structure, though not without its share of twists and turns. Indeed, the events from the previous chapter/episode are just sort of left in the background, opened up into a few scenes that take place well outside Emma and Miyako’s investigation.

And in some ways the decision not to follow through on those elements is a little frustrating, because presumably there was still time to go on Charles’s hit, but he seems to have gotten through that and is up to his old tricks. Tricks which are going to put him not just at odds with a lot of elements in the city, but seem primed to set Emma and Miyako on a collision course with all of their decisions and actions to this point. I am vibrating with anticipation imagining what all it means, that Charles and Miyako might find themselves on the same “side” and that when all is said and done, no “side” in this struggle is going to be clean, none safe. Right now that all is being put off to later, but the implications are pretty clear, that compartmentalization might work wonders for living day to day, but the danger is always that by not dealing with the elephants in the room, at some point you’re going to get stepped on, and whatever the case there’s going to be a whole lotta shit to clean up. So yeah, the series continues to be tense, and I do love the way the mystery here played out, the “solution” a tragedy of family and betrayal, a look at what could easily happen when people decide to take justice into their own hands. I’m almost afraid to know what happens next but I am also Here For It, so bring it on! A fantastic read!

Posted by Charles Payseur at 6:07 AM