This special issue of Mithila Review is so big I need to take it in two courses! The first, this one, will focus on the original fiction, while the second go will look at the poetry (and wow is there a lot of poetry). The fiction is no slouch either, though, with five new pieces, including an older German story translated in its entirety to English for the first time. The stories examine borders and difference. Violations and connections. They look at what makes people vulnerable, and what makes people strong. These are stories that feature aliens and visions of other worlds but also very intimate glimpses into the lives of others, and how we might better empathize with our fellow humans. These are stories to inspire and, at times, confound, and I’ll get right to the reviews! 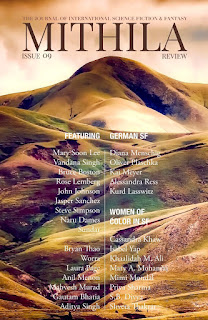 This is a beautiful story about family and stories and identity, that finds Sam dealing with some very difficult choices, caught between two worlds and a whole lots of people who think they know what’s best for him. And it’s a very difficult story about childhood and growing up and societies punishing children. Sam’s story is mostly one of seeking acceptance and love, something that’s hard to find as a trans boy except with a few people—his father and a friend at camp, mostly. Except then an opportunity opens up for him to be taken somewhere that he might be accepted, where it would be easier. Only what he’d have to give up, and what he’d have to accept as part of that, is not insignificant. The story is lush in language and a bit haunting in setting, building up a world that has magic or technology sort of bleeding into it, where Sam is constantly told he doesn’t belong, he doesn’t belong, without ever anyone seeking what he thinks, what he believes. And ultimately the story seems to me about acceptance and belonging, and not necessarily going to the place where things could be easier if it means betraying those you care about, if it means having to give up something vital. For Sam, there is a huge amount of hope, not of escape but of finding his place and working to build something strong enough and joyous enough that it can weather the storms and difficulties the world throws at him, which is something that is helped by the people he surrounds himself with. It’s a lovely story about stories, too, those we tell and the ways they change and how those stories can change the world. I don’t want to give too much away but the story focuses on the lines between cultures and individuals, examining the tapestries of whole societies to find the missing stitches. What remains is wrenching and beautiful and wonderfully complex, showing how a person can be a tapestry all to themself. Really, just go read this story, it’s amazing!

This is an older story but one that apparently kicked off the tradition of the Universal Library, a structure that contains all the books that could be written. It’s something that’s been played with a lot in speculative fiction, from a long time ago through today (in fact, there have been a few this year that I’ve noticed that have played off this idea). The story isn’t, at its core, very speculative, really just being a discussion between people about writing an article for a newspaper which got a bit out of hand. But I like that it does draw a distinction between the infinite and the unimaginable. Which I think is a rather important distinction to make. Because, well, we can represent a lot of things in numbers and tables. In neat figures. And yet that doesn’t really make the concepts easier to understand. To put a size to the Universal Library is possible, after all, but the size is so outside the scope of human imagination that it just really isn’t helpful to do so. To say that this thing is finite really doesn’t mean that it’s possible for people to truly know it. So it is with the ways people can express themselves. We are capable to only combining so many words and characters together. The results of imagining what it would take to exhaust every possible combination of characters is a number. Is finite. But neither does it quantify human imagination (because we can always create new characters) nor is it something that we could ever reach. That something being technically finite (and arguably, at best) doesn’t mean that we shouldn’t value the range of the human imagination. Which makes this an interesting read well worth checking out!

This is a story of wonder and stars, featuring a girl on vacation with her family from the city to a place nestled in the mountains, bordering on the wild. Exploring with her younger brother, they come across an abandoned observatory, only what they find there is strange and different and slightly magical, tinged with some otherworldly power that allows them the briefest of glances at something wholly wondrous. I love how the story is vaguely unstuck in time, at this point in the main character’s life when time is shifting from being something there’s always more of to something that’s limiting and scary. It’s this reaching out, not into adulthood exactly but into being older, that allows her moments when she can imagine being that future-self looking back to herself now, and it’s a bittersweet kind of feel, because something of the wonder of childhood, the imagination and the freedom, is passing away into the banalities of the human world, the disappointments and the anxieties and the more mundane details. And yet the story is about confronting that and still holding something in awe, in wonder. In this strange observatory she gets a look at something that’s not really a part of her world, that isn’t inspiring or mystifying because it’s childish but because it’s not, because the world is full of wonders and things that defy definition or explanation. Things that are begging to be explored and studied and examined. So for me the story is about scale and about age. That idea of the mountain from the title is an interesting and resonating one for me, bcause as a child a small hill can seem a mountain. And when you grow it becomes less impressive, smaller. And yet that’s not to say there aren’t still mountains out there. It just means that imagination and drive to explore has to level up with age, that we as people, like the main character, have to take those larger unknowns as inspiration to never settle for the mundane. To keep pushing into the fantastic. And it’s an amazing piece that you really need to experience!

This is a rather strange and unsettling story about a man...well, the story leaves a lot of the implications of the story shrouded in mystery, in uncertainty. It follows the main character as he takes a pill to transform his body from a large and white to smaller and brown. It’s a transformation that allows him to get close to his ex-wife again, something that he wants following the dissolution of their marriage. Which makes this a rather creepy story about how he’s using this pill to manipulate and essentially rape her, dating her through different guises and not revealing his true self. Which...which is pretty fucked up, and shows a certain amount of the hate the man holds inside him, the contempt he has not only for his wife but for people of color, placing his rage at how his altered body can gain access to his wife when his regular (white) body cannot. And yeah, wow, it makes for some complicated reading, [SPOILERS] because the ending seems to imply that it’s possible the ex knows what’s happening. At least, that’s how I read it, opening the door that what he thinks is going on might not be what’s really going on but if that’s the case and even if it’s not I’m not entirely sure what to think. It seems to be making a statement on how men treat women, and it gives very good reason why this marriage might not have worked out. Only I’m torn on my reading of the text, bothered by the way it all happens and the promise that it will continue. It’s a difficult story, to be sure, and so I recommend people approach it and see what they can get out of it.

This is a story of history mingling with the magical, of a young person asking stories from an old man who was old enough to have lived through a great land being split in two along religious lines. And Baba, whose story the piece is, though who is not the main character of the piece, reveals what happened from his perspective. Or, that’s what it seems like at the beginning. The story does a great job of nesting its narrative, of making the real story about what happens in Baba’s narrative, and really in many ways making the story about empathy and learning, about silence and aid. Baba grew up in a time when people lived together, learned from each other, and mingled. And when the troubles came and he had to flee, he was helped because of his voice, because of his gift for telling stories, essentially. It’s something he had that others did not, and in many ways I feel the piece is about listening to other people’s stories, regardless of race or faith, of really listening and appreciating them so that the walls between people aren’t put up, so that these partitions aren’t necessary. For the young protagonist, the lesson seems to be to listen, and to reach out, and to not let the mistakes of the past prevent them from practicing empathy in the present. It’s a lovely piece with a subtle magic to it, a presence that surrounds Baba but is no less wondrous than the way he can tell a story, or could tell a story when he was little. I love the memory of the piece, the wonder of the main character, and the lovely twist at the end that brings everything together. A great read and a fine way to close out the original fiction!