I’m looking at the second half of the Summer 2017 issue of Glittership and it’s another great collection of queer SFF. Because of what I got to last time, what’s left is an original story, a reprint story, and two original poems. I must say I’m an especial fan of venues that mix their fiction and poetry, and this half of the issue features outstanding examples of both. All the pieces in this half of the issue seem to follow a theme surrounding repression and fear. The pieces are about characters moving through a world that is openly hostile to them, where they don’t fit in and cannot full express who they are. Because of fear, because of hate, they have to hide a part of themselves, and the action threatens to rot them from within. In some of the pieces this gives way to acceptance and expression, and in some it…doesn’t. It’s a mix of heartbreaking and heart warming, and it’s all very good, so let’s get to the reviews! 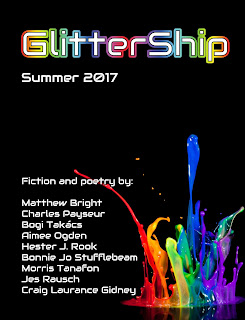 “The Last Spell of the Raven” by Morris Tanafon ( words)

This is a beautiful story about magic and about cost, about love and about harm. It features Galen, the son of a powerful magician and a magician himself, blessed and cursed with the ability to do magic, though limited in the same way all magicians in this setting are, able only ever to cast five spells, the fifth being fatal. After using the first on a whim and the second on a young love, Galen’s put in a difficult situation with how to spend the last two safe spells he has. And the story does just an amazing job of exploring this world and its magical premise, even as it is also our world, an interesting take on historical fantasy as conflict grows between Britain and Germany, and the main character finds himself however briefly in the military and then...not, more adrift than anything else. And I love how the story explores the costs involved in the main character’s life, always pushed one way by his mother and another way by his inclinations, a romantic with a power that isn’t supposed to be used for whims, or for justice, but rather for the schemes of war and profit. It’s a slower story, told as a sort of confession looking back at life, one that has its regrets but most of the regrets seem to be about the world being a hostile and often ugly place, Galen being let down by his mother, expected to fit into a mold that didn’t suit him, pushed and pushed and finally hated for being different and for not being ashamed of that. Because in the face of nationalism and war difference is dangerous indeed, policed and eradicated where possible, even as Galen still tries to do his best and live without hurting anyone. It’s an excellent read!

“Circus-Boy Without a Net” by Craig Laurence Gidney ( words)

This is a story about heaven and hell, hiding and acceptance, song and spectacle and identity. C.B. is a young man pulled toward a vision that he doesn’t quite understand, something deep and what should be affirming and joyous but becomes shameful and something to repress when it becomes obvious what it might mean to his parents and community. Instead he throws himself into the religion in an attempt to seem normal and pious, only to find that his feelings don’t go away and, what’s more, he can’t fully escape them and really doesn’t want to, because who he is that he’s denying is beautiful and powerful and shines with a brilliant light. It evokes The Wiz as a key to the arc that C.B. goes through, living his life in the drab colors of the normal world, the small town where his religious family pushes him to be normal, to be a man, something he’s desperate to do even as he has no real interest in it. His life is dominated by fear. Fear of discovery and fear of damnation and fear that his family will reject him for who he is. And so the story for me becomes about fantasy and performance, as well, C.B. pushed to get into drama in some ways because it gives him a safer space to express his true self, the irony being that everyone assumes that it is a lie, and yet it reflects more truth than the lie he lives every day. The magic of drama, of Oz, of assuming a different role, becomes a force he fears will drag him down to hell, will strip away the safety net of religion that might stop him from eternal damnation. It shows the damage done to him by the religion of his parents, by the knowledge that they could hate him for who he is. It’s wrenching and it’s beautiful and the ending merges reality and fantasy to provide a turning point for C.B. It’s a story that feels like just the beginning of something larger, but it’s also a complete story that gives a gripping look into this chapter of C.B.’s life. An amazing read!

“A Seduction by a Sister of the Oneiroi” by Hester J. Rook

This is a nicely sensual poem that mixes a sense of danger and transformation, of temptation and hunger, with something brighter than I was expecting. After all, a mortal human being seduced by a supernatural being is not normally something super positive. Especially pulling from the Greek tradition, normally when mortals and gods or even demigods meet, the results are rather disastrous. And yet here there’s something about this particular situation that seems to go beyond that particular trope. The imagery is all sweetness and food-related, which again might be fraught because of the loaded nature of food, that it can trap someone like Persephone in the underworld. At the same time, the ending of the poem refuses to fall into that, lets the narrator willingly embrace this strangeness, this exaltation. I love too that the Sister of the Oneiroi is treating the narrator like a goddess, like an equal. The implication becomes that they belong in the realm of dreams, that the mortal world is not worthy of them, and aside from being perhaps flattery the narrator also must taste a bit of truth there, that in the realm of dreams they can get away from the limitations and the definitions that would call this love or passion or beauty between the characters as dark or twisted. Because really it seems more triumphant to me, more glorious. The characters are finding something in each other that puts a fire in them, that is full of joy and flavor. For me, at least, it banishes the potential darkness and sets these characters as entering into a new realm together, powerful and free. And it makes for a wonderful read!

“Defining the Shapes of Our Selves” by Jes Rausch

Well fuck, here is a heartbreaking and wrenching poem about being perceived, being judged, and how it fits in with fantasy and science fiction, with books, with video games, with...well, it casts a wide net while maintaining a razor focus. The poem is broken into three sections, beginning with a fantasy setting, ending with a science fiction setting, and with a wedge of the more mundane reality in the middle. In each, the narrator works to live the life that has called them—in the first and third, at least, this means being something of an outlaw, a rogue, a thief or scoundrel. They move through a world without asking for permission and this gives them a drawing power. And for all that power and confidence and skill, they run up against the constraints of the settings. Like a bad game or book that only allows for two genders, the narrator is stalled because they cannot fit well enough into one of the options. In the fantasy setting, it’s about magical challenges that are gender-specific (but only binary) and in the science fiction setting, it’s about not having enough body modifications to select the gender that fits, so that even in a place that seems to allow for more than binary genders, it’s all about body parts and surgery and how much a person might be made to fit the prescribed image of a certain gender. And both parts are wrapped into the middle section, which seems to be set more in this world, where the narrator is not a rogue or at least cannot act that way because they have to live mostly in fear, free only in the confines of their apartment, and only in certain ways. And oh glob the line about the chicken tikka is just absolutely fucking crushing but has a vein of truth to it that shines. Here the narrator finds no real escape from the pressure to conform, to fit in, because even in the realms of fantasy and science fiction there is a failure to really accept people as themselves. And ahh, it’s so good and you should go out and read it immediately!!!