I have a new story out! This one is "Fieldwork," an m/m urban fantasy romance from Dreamspinner Press as part of their A Walk on the Wild Side Daily Dose 2016. It's set in a Chicago where shifters of all shapes and sizes live and work and eat pizza. And, I guess, kinda fall in love. And okay, okay, that's super sappy…but #SorryNotSorry 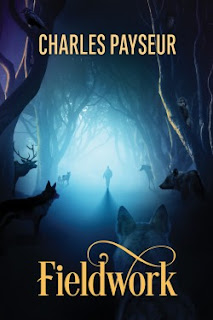 When I was getting ready to write this story I was mainly aiming to do two things. First, to tell a story about passing and faking something in order to avoid ridicule and scorn. And second, to glory in Chicago-style pizza. I'm from the Chicago area and seriously, anyone who says that Chicago doesn't have the best pizza is obviously wrong and jealous of how amazing it is. There, I said it. I await the masses arriving to troll my pizza preferences but I will stand against the waves of derision some people have for Chicago-style pizza. If there's one thing Chicago does best, it's corruption. But if there's two things, then pizza rounds out the list.

I don't write an awful lot of urban fantasy. And I will admit that I have an aversion to a lot of the shifter fiction, and especially the shifter romance, that's out there. Especially if there's some sort of True Mate thing going on, count me out. It reads super creepy and nonconsensual to me and just no, thanks, moving on. What I wanted to do here was to use shifters in a world where their queerness isn't questioned at all, to stand as a lens by which to look at passing and the pressures to conform to a certain vision of what people expect. Ignacio, the main character, enjoys his work, his friends, and (more or less) his life. But all of that runs through a filter of fear because he's pretending to be a wolf-shifter. The rest of his family is and it's easy enough for him to play along, especially because he gets treated better as a wolf than as what he really is.

And yes, it's not so subtle a metaphor, perhaps. But I did have a lot of fun with it. And I love Ignacio (aka Nacho). It's his fear that speaks to me, his flightiness, his worry. And his love for numbers, for spreadsheets. Reed is a bit more a classic foil for Nacho. Reserved, confident, with just a hint of vulnerability. Reed is drawn to Nacho and feels no need to hide it or fight it. In some ways he doesn't understand why Nacho is so afraid, but that too is intriguing to him. In many ways they mirror the animals that they shift into. At least, that's what I tried to do. Reed the tiger. Nacho the ??? trying to hide his nature. That's what interests me about shifter stories, how the animals act as totems in some ways and how people can those traits and work them into their personalities.

And I just rather like writing about the Midwest, I guess. Writing a story actually set in a fictional Chicago was a lot of fun. Not just the pizza, but because it's a little harder to find things set in the Midwest and not out in New York. There's a lot going on in Chicago and a long history of corruption and violence. The whole Prohibition era is interesting to me and it's easy to see that the city and the state are still dealing with traditions stemming from that time. Corruption and organized crime and all of it, and people doing very good work trying to fight against it. So yeah, there is something of a Prohibition feel that I wanted to infuse into the work, or maybe a post-Prohibition feel, where the bosses are all in jail and the gangs are mostly broken up but there's still this backbone of corruption almost waiting for a return to the days when there was a Capone at the top of things.