Quick Thoughts - "The Colors of Magic" 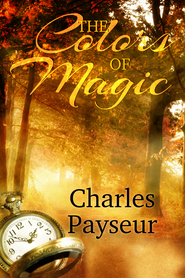 So this is actually the first erotica I've sold that isn't just m/m, which is slightly weird. I'm bi but I tend to focus more heavily on writing m/m relationships in my erotica in part because I write primarily for queer calls and in part because I'm just a bit more comfortable that way. Which is not to say that I don't write bi characters. Many of the men I write into my stories are bi and just happen to be entering into m/m relationships. The publication I originally wrote this for, though, takes straight and queer stories and so I thought maybe a bi poly relationship might have a better chance of selling. I wasn't really correct, as they rejected it. But even erotica gets more than one chance to sell and when I saw a call that was about graduations I quickly got this ready to send back out.

If I had to boil down this story to something approaching a pitch, I'd call it a more adult Harry Potter where the main three characters are all fucking each other. I wanted to show this stable poly relationship where everyone involved was pretty much on the same page, had come up through life together, had faced down demons together (both literally and figuratively). I always wanted to write a story about the pressures to choose. Because there is a strong pressure that's put on bi people to kind of…pick a side, I guess. To either seem straight or gay. Just as I feel that poly people get told that they need to just make up their minds and pick a person and that will solve everything. Like being in a two-person, monogamous relationship just "fixes" everything. And…well, I want more stories where the characters are allowed to make their own way.

And okay, I also wanted to play with the idea of the Chosen One. Jamie here is the classic Chosen person, fated to help save the world, or save the magical world, at least. And he has, with his friends and lovers, done just that. Multiple times. Consider this a sort of coda to the series, where all the adventures up to now have been defeating The Bad Guy only to still be stuck in a system that's bullshit. It's almost a YA story because it's about giving younger people the ability to chose their own labels and fates. It's about trusting people to make their own decisions. It's about letting young people, especially those who you rely on to save the day, to maybe have some power to guide what they are saving, what they are being asked to sacrifice so much for. It's not surprising that a large number of young people identify as not straight, as much more open to different kinds of relationships. There's a brave queer world out there, and I for one want more of it.

So yeah, this was a really fun story to write, and a fun world to explore. Like with most of my smut, I aim for super adorable and just a bit ridiculous with a kernel of something deeper, darker, and more meaningful. I feel here that allowing the characters to embrace who they are, to embrace each other, is important. It shows some of my frustrations with love triangles and especially ones that seem super queer-bait-y without ever following through and always (ALWAYS) ending things in a straight pairing with any possible bi-ness erased and treated like a joke. Not cool, world. So have this m/m/f fantasy to make things maybe a little bit better and thanks for reading!