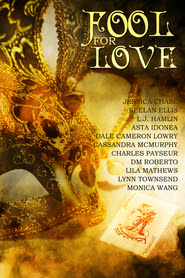 It is also available as an individual ebook! (With it's own sneak peak!)

Perhaps you're asking yourself how this came about. How are we living in a world where Thor/Loki erotica is a thing that actually sold to an actual press and where I actually got/am getting paid for it? First, and biggest disclaimer (and one I had to answer a few times during this), it's not fanfiction (not that I have anything against fanfiction. I love fanfiction. And if one looks at it like this is fanwork from the myths, then I could almost see it, but as that's public it doesn't quite count as fanfiction IMO). I like Marvel and all, but this story has absolutely nothing to do with those characters. This is my own take on the Norse myths through the lens of Loki wanting to pull a prank on Thor and the two men finding something a bit more interesting to do instead. Really what happened was I was thinking out pranks and pranksters and Loki was just the obvious choice. And the obvious choice of who to prank would be the almost-too-easy Thor.

I would be lying, though, if people's fascination with the pairing from the Marvel properties didn't in some ways inspire me to explore how I might view a relationship between the two. Because in my mind you have Thor who's very sort of living the Norse lifestyle. Big battles and big drinking and sort of being a big idiot sometimes. He loves to fight and fights for the glory of Odin. All on the up and up. And Loki…well, Loki likes to play pranks and is a bit anti-establishment in that he's from the other side of the Bifrost and hangs with some of the darker elements of the mythology and yet also hangs out with the Asgardians all the time. So he's there, sort of a troublemaker that no one can deal with because he can just change into a horse or something and he's clever. But to me he's also like a lot of jokers and kinda sorta looking for some attention, wanting people to see him.

So yeah, it's something that I play with a bit in the story, and part of why I loved writing it. Because it is ridiculous. There are bar fights and ice storms and shattering windows and (as the title hints) some mouth sex and all of it was just great. These guys are all over the top with their emotions, neither of them really hiding away. And both obviously admiring the other because I see the Norse as liking a good prank. Of course Thor would laugh at a prank, and even appreciate the ones that are done to him. So the whole antagonistic thing going on between Thor and Loki is also sort of courtship. Which, again, fun as hell to write. Look at the sample and you might be able to see how I was sort of having a lot of fun with the language, the dialogue, the everything.

I hope that the humor comes through in this story. I rarely know how my stories are going to be received and I know a lot of romance/erotica readers are not exactly into SFF getting into their not-expressly-SFF anthologies (a sin I am guilty of all the time). I wanted something big and loud and hopefully funny. And taking place in Wisconsin, because write what you know. Valhalla Falls is actually not real (gasp!), but is an awful lot like Eau Claire, where I live. Really, this story was written at a time when I needed to write something ridiculous and amazing. And I'm very glad that it found a home and that people will have a chance to either love or hate or be bored to tears by my rendition of two Norse gods fucking. Thanks for reading!