A new publications has appeared! Orthogonal SF is a new speculative fiction venue (despite the name, these are not all science fiction, which I like FWIW) formed a bit out of spite. And anger. And that does come through a bit in this first issue, which is fairly dark but also nicely balanced. The stories are moving and do have a strong vein of anger to them, as well as the claustrophobic feel of being trapped and trying to get out, with a bit about anonymity and archetypes thrown in for good measure. It's an interesting mix of stories, and I'm just going to get to the reviews, shall I? 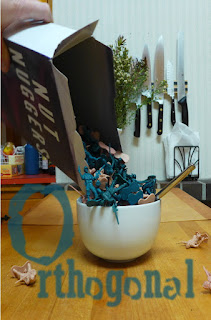 The first story of the issue certainly kicks things off with a bang, a creepy and punchy and nicely sensual flash piece filled with winter. I will try not to spoil this one because it is quite nicely constructed and conceived, drawing the reader down this rabbit hole where the familiar and warm meets something older and infinitely darker. There is a brutality here that is beautifully rendered, and the use of the letter form both works as a love letter and as another kind of letter entirely, and it is a delicious moment when the reveal happens and everything unfolds from there. Don't get me wrong, this story is rather disturbing and violent, but the language is elegant, the lust and the abandon and the grace of the love portrayed compelling even as it is horrifying. It's not exactly the best time for a story like this, because of its subject matter, but I guess any time of year is a good time for a nicely done scary story, and winter at least captures that feel the story is full of, a vast waste and a burning fire and two people connected and then torn apart. But still there lurks a bond that might not be broken, a fire that might be rekindled with a letter. A very nice story!

This story takes hold of a certain zeitgeist toward anonymity (as well as working quite well with this particular publication's submissions methods). The story is a near future science fiction that looks at the future of Anonymous, at the future of resistance and revolution and iconography and identity. And in that it's a neat piece, worked around a group of journalists called in to witness the unveiling of a new OS, or rather the unveiling of the new order. The story itself is a history lesson told in reverse, and a compelling one, that looks at what weeds might grow with the over-dependence on pesticides, how there is no stopping certain kinds of movement, how identity blurs when it is exploited. There's a lot going on in the story and a bit of a disjointed feel but it works with that idea of "we" that is introduced, that the main character is sort of an amalgam, has dissolved some of the walls keeping them completely singular. It's a subtle aspect, but one that I quite liked, that as the story goes the strong I dissolves away and is replaced by something different. And there is a sort of hope in the story, not exactly the most pleasant kind but at least a cyclic kind of hope where empires fall and oppressions are challenge. It's a story of authorship, too, which makes it a bit meta and well worth checking out. Indeed!

Well shit. This is a viscerally moving piece, another brutal one and this one capturing a bit of nostalgia, a time when gelatin was all the rage and things were simpler. Except not really. Except things were worse and more violent and more oppressive. Except things were more terrifyingly gelatin and the story just does a great job of showing a fracturing person. A mother who can take no more, who is tired if being forced to conform. And in that gelatin is a lovely metaphor and image, that something is molded and solidified, something that is made from something living, and then cooled, mixed with other ingredients that no one really likes eating. And the gelatin is always in motion, always on the verge of jiggling itself into oblivion, breaking that surface tension, but can't, and when broken it's just a pile of unappetizing and ugly mess. The story is incredibly dark which captures a bit of rage mentioned in the editorial and that has helped to define the issue so far, a rage at the roles and how damaging they are and how each mother in turn molds her children and how it all just gets passed down and passed down. There's a great many gripping and provocative scenes, and there is a manic energy to it, a breathless rush through that keeps the pacing fast enough to smooth out any slightly choppier areas or confusing bits. It's a lot of fun even as it's dealing with some serious subject matter. And it's quite a good read!

This is an interesting story, and one that once again plays with the idea of anonymity. Like the previous story, it's a bit about families, where the mothers are moms and the fathers are dads, without proper names. In some ways that makes the story a children's tale because the children are the named characters, but the voice of the story is a bit more adult and not exactly of a time period. At least, the story's tone and style seems to borrow from an older sort of vision of childhood, one spent playing with other kids on the streets. Perhaps early 90s because video games are present and similar far but the space angle of the story makes it seem older, some sort of 70s version of what the 90s might be, with citizen astronauts building their own ships. The running theme of the story seems to me to be getting stuck, and especially the dads getting stuck. It is a very male-centric piece, about mostly boys where the only women are the moms and the only girl present is mostly an object of sexual desire. But the voice of the story moves along nicely and is laced with a nice amount of profanity. There are spots of humor and spots of wonder, and though this might not exactly be my kind of story, I think there are a great many people who would like it just fine.

This is a rather interesting way to close out the issue, with a story told as propaganda about a privileged world where people can live in a Heaven on Earth thanks to nano technology and extreme wealth. The story flits between Min and Max, the embodiments of privileged sloth and by-your-bootstraps fervor. Min is lazy, can't-be-bothered by much, and Max is aggressive, schooled, always striving. The great thing about the story is how it plays those two archetypes off each other, especially in light of the world that they live in. Obviously the story, cleverly told like an old-school hygiene film, is pushing people toward being a Max, but the story doesn't exactly make everything clear and cut. [SOME SPOILERS PROBABLY] Because really, they both live basically the same life. Min fails his way up, gaining wealth and prestige without trying. His life is shallow and yet he is still necessary for Heaven, even for Max to come back from the brink of destruction. How they play off each other shows that this is a system that doesn't really favor the bold but the lucky. Not ability, because in this situation ability has been largely erased. The story extols the virtues of Max, but even for the good he does he only was able to because of his advantages, because of the inequality, and the system shows him transcend because of it. It's a strange story, a world that is slowly revealed, a world that seems largely arbitrary and fickle. But it's a fascinating world, a great vision of Heaven, and a story that I definitely recommend checking out.
Posted by Charles Payseur at 1:00 AM