Two pieces of fiction round out the November issue of Urban Fantasy Magazine, though sadly only one of them is original. In order to make more of a review of this issue, I'm looking at both stories, and I don't think you could really ask for more different tales, though at their heart I see two stories about a deep dissatisfaction with "the way things are." In both stories there are characters faced with reality and their own unhappiness, and in both those characters chose to make a change, chose to drop the security of their own misery and try something new. It's an interesting contrast to look at them together, but worth doing. Time to do just that! 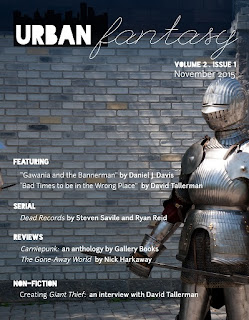 Well this is a rather sweet story of a man and a monster hunting knight. Of Tom and Gawania. It's an interesting setup, a contemporary story with dragons and orders of knights and Tom, who sort of needs the orders to stay afloat. He's a banner man, someone who's supposed to support knights in their quests, except that he can't really bring himself to help Gawania kill the dragon that lives in the lake near where he lives. A dragon that isn't violent. A dragon who lost the other dragon they were living with sixty years ago to a different hunter. What results is a story where Gawania is something of a lost youth, someone involved in what amounts to a cult, and Tom acts as the person who shows her the error of her ways. In that way it perhaps pays a lot of attention to Tom's roll of breadwinner and his pain at maybe not being able to provide, and perhaps could have set things up so that Gawania wasn't the naïve youth taken in by a cult, but the action is well done and the overall tone of the story is nice, about questioning what you're told and refusing to be a part of something that causes pain, that does undo damage. It's a fairly straightforward story in that regard, but one with some cute moments and with a general warmth to it that was nice. The premise is more what sells the story, the modern dragon hunter, and the writing is solid enough that it was quite a pleasant reading experience.

I was unaware this was going to be a reprint, but as this is only one of two stories appearing at the publication, and because I rather enjoyed it, I'm reviewing it anyway. The premise of the story is fairly straightforward, a sort of deontological dilemma as the main character, a man in an unhappy relationship and a rather deadend situation in general, is basically told that [SPOILERS] the world he's living in isn't real. That it's a backup that's going to be deleted when it's no longer needed. And the story is well written, the main character a sort of everyman who isn't happy and who doesn't really do anything to make the world a better place. And when he learns that the world isn't real, or might not be real, it's like he wakes up. And I understand and rather like how it happens, that he sees that he's doing nothing and needs to figure himself out so he goes, tries to change. I like how it doesn't matter if it's true or not, or if it's true it doesn't matter if his world isn't going to be erased for thousands of years. Just that it reminds him that time is precious and shouldn't be spent being miserable and making people miserable. I would have perhaps liked a bit more complication than just leaving, because to me there are more interesting directions to go and, ultimately, I don't see his actions as anything other than still selfish, and I dislike the idea that in a mortal setting people need to be selfish. But the story hits its marks fairly well and was an interesting enough read. Worth checking out, certainly.