This month The Books Smugglers offer up a double-helping of fairy tales mixed with noir mysteries. And the stories are delightful! I'm not incredibly into noir stories most of the time because they tend to be rather full of some...not-that-great tropes and cliches, but these stories subvert in the best of ways while providing fast action and excellent world-building. 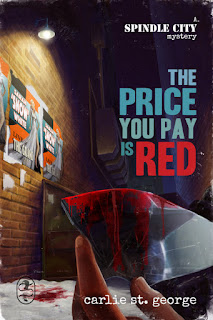 Fairy tale noir. I can say without hesitation that I wasn't expecting to like this as much as I did, in part because I might have been expecting it to be familiar. To take the combination in a direction that I've seen before. But it didn't. The world that is created is not our own with a splash of magic and grit. It's not Fables and it's certainly not Disney. It's noir first, a setting where the only magic is how people can turn out to be such terrible people beneath a surface shine of sweet and proper. The story hits the ground running, bringing us Jimmy Prince, a private eye and son of a wealthy family who doesn't really know how to do his job very well. Indeed, that's what makes him charming.

Spindle City is a bit like the here and now of a hundred years ago but also build up as something different, something interesting. Devastated by disease, corrupt to its core. The story does an excellent job of giving the city a feel, or perhaps two feels, one the shine at the surface, the high society of balls and benefits and another, just below the surface, of rot and murder and drugs and corruption. It's not a pretty place despite the pretty people, and it's a world the Jimmy navigates with mixed success. He's an interesting character, bisexual as far as I can tell (yay!) and privileged, born with a silver spoon that he tries to spit out but it shows in the way he expects the world to work. He tries to do "the right thing" but most of what he does in trying to save people is need saving himself. And I love that flip, the way he is the damsel in distress, the way he gets things moving but not really on purpose.

Which is not to say that he's not interesting, or compelling. He's learning, but he's learning because he really hasn't had to live with pain. Not so for Jack, his assistant, who grew up on the street and works as his secretary. Not so for many of the women of the story, who find ways of dealing with a world that is obviously set against them. People find power in interesting ways, and the story does a fine job of making its characters deep and complex. And really the story is just fun, even with the murder, the torture, the horror of what happens. The voice is crisp and chatty, the action violent and tense, and the plot tight and accessible. It works, more noir than fairy tale but nicely subverting both genres in a way that had me smiling. Definitely a story to check out and setting to eagerly return to when the two sequels drop soon.

Well goddamn this story was good at playing with my emotions. Gah! Hold on, got to pull it together. Seriously, though, this second story of the Spindle City novelettes is, well, better than the first. I think I can safely say that. In the same way Empire is better than Star Wars. Because, world building a bit set up and characters established, there’s a freedom to both fully explore what’s been set up and also completely fuck with people and their fragile little hearts. Like, once you’ve reeled people in with a noir story that subverts tropes and hints at a lot, you’re free to suddenly take things off the rails and go where you wanted to all along. And yes, this story goes to some dark places and some cute places and is still awash in blood and grit but manages to do something the first story didn’t, which is mix hope and fear and pain so beautifully that the ending echoes into a silent room, everyone quiet at the weight of it. For me it is at the weight of my own want for Jimmy to maybe have a piece of happiness. But…well, things in this story get dark and they get good.

[PROBABLY SOME SPOILERS FROM HERE] The first thing I was super pleased about was how the story fleshes out the relationship between Jimmy and Hank, more fully exploring Jimmy’s bisexuality and rather complicated romantic life and giving him someone to care about besides Jack. Jack is back, though, and awesome as ever, and it was great the moments of her interacting with Jimmy, defying his attempts to keep her safe, to keep her out of trouble. It’s obvious that they do this for each other, but Jack is tough and great fun all around. The story also benefits from the addition of some new characters, including a trans man who is delightful at an awkward dinner with Jimmy’s family and also a sharpshooter. He is the gun on the wall, and the story makes excellent use of him throughout.

The story is wrenching, though, for the way it delves fully into the corruption of the city, not just the scheming but the layers of oppression and exploitation. It creates a rich tapestry of players, and Jimmy here is finally a bit more with the game, not constantly playing catch-up. Some of that might have to do with the rude awakening he got at the end of last story and some of it has to do with another he gets this time. Things are not going well for him even as he grows as a person, even as he starts to see beyond his own problems and upbringing and yearns to be true to who he is. It’s a great story, really, and now I have to wait for the third one and wonder what the hell is going to happen. This is a fairy tale noir, after all, full of tropes that have been smashed to bits. And the last is the idea of a happy ending. I will admit it fills me with equal parts hope and dread to see what happens next. Will Jimmy get to live happily ever after with Hank (taking a page from Return of the Jedi with its Ewok party) or is there something else waiting? And how much will I cry? Tune in next month to find out! A very good story, though, and I highly recommend checking it out.