This month's Urban Fantasy Magazine is all about guilt and the weight of actions. In the first story, the weight comes in the form of a child, half-mer, who is never really allowed to be her own person. In the second the weight comes from a dead friend, one who is never really allowed to pass on. Both are interesting and sad and do a good job at showing how actions can lead to these weights, how people construct mental walls that keep them alone and suffering, and both give small hints at how those walls might come crumbling down. So let's get to it! 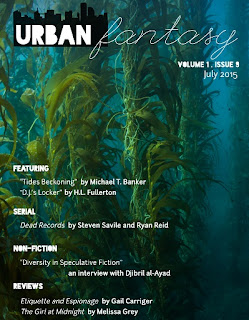 This is a story about a couple having a child, only things don't quite go to plan. The child is half-mer,  which means that Therese, the mother, cheated on Dennis, the father, with a merman. The child that is born of that joining is one that Dennis in some ways resents but one that he tries to love regardless, though for the ways that she is human and not the ways that she is mer. It's an interesting story, the parents both living with a child that is more reminder of the transgression between them, their Chelsea a child yes, but also a weight that keeps them apart and bitter despite that they stay together. Of course, Chelsea also ends up being what draws them back together, what gets them to realize that maybe their relationship is stronger than what happened. Because when Chelsea gets a ride to the ocean she finds herself in the wide beyond, out of her comfort zone and in need of help. It's a strange story, filled with startling imagery and with Chelsea, who is so obviously human and yet other as well, wild and untamed and who suffers having to live as her parents force her to. I feel there might be a statement in here about raising children in general, about infidelity and forgiveness, and nI liked how Chelsea was still a teen for all her differences. I wanted a bit more from her, honestly, and less from her parents, because while her parents still treat her like a weight on their relationship, she lives a life between places, apparently unable to return to the sea but desperate for it. I think her character was most interesting, though perhaps underused here. Still, it's a story worth spending some time with.

A story about guilt and the stupid mistakes made as a child, this one does a nice job of exploring the mind of a child deeply effected by grief. And, more than grief, by the weight of mistakes made when he was too young to understand his actions fully. Trying to run from his guilt at the role he had in his best friend's death, Jonah is plagued by reminders, by sand dollars with messages to him. What they are saying is a little bit up in the air, but it's obvious that D.J., his best friend, wants to talk to him. Perhaps it's to forgive him. Perhaps it's to get Jonah to forgive himself. It's something that Jonah doesn't want to face, that he doesn't want to think about. He invents other ways that D.J. died, hurtful ways that he tells people. But it doesn't soften his guilt or his fear. And, to me, the truth is that it's something that will never leave fully. There is a sense that regardless of what happens, that Jonah is not just getting over this. And perhaps he shouldn't. Yes, he is a child and he didn't properly understand what was happening. And it's not all his fault. But his friend died. And that's not something that just goes away, especially because everyone else knows, and though they don't talk about it they do seem to place some of the blame on him. Like in the last story, this one act becomes a weight on him going forward. And in the end that guilt, that weight, sort of shows itself, not exactly as the boy that Jonah knew, but as a construct of Jonah's own mind, dredged up from the depths and dark and twisted and needing to be dealt with. Whether or not Jonah actually manages to do that is left up in the air, left unanswered, but it is an interesting and moody story that examines childhood tragedy and guilt. A quite good story!
Posted by Charles Payseur at 1:00 AM