The theme for this month's Crossed Genres is Novelette. Which isn't really a theme as it is a style. A length. But hey, it's all good, as the stories still live up to the quality that people expect from the publication. All three are interest, two of them science fictional and one a contemporary fantasy/magic realism piece (gah, I dislike genre differentiating). All meet the word requirements for novelette, but all are also rather contemplative stories. Though there is a bit of death and dismemberment, there really isn't too much pressing violence. These stories use the higher word count to draw things out, to slowly build the tension. It's an interesting collection of stories (and three of them when I was only expecting two), so hurrah! To the reviews! 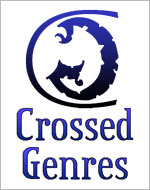 "Elegy for the Green Earthrise" by Joanne Rixon (8943 words)

This story follows Marissa, a woman diagnosed with advanced skin cancer, as she seeks some unorthodox treatment for her condition. Or perhaps that's not quite right. It's not treatment for cancer, but rather treatment for death. Copying herself into a computer, basically, as part of a project to preserve humanity. To preserve what's possible, at least, because the world is dying. Species are dying off and the world has reached its tipping point. Only the story is much more about Marissa, about her transition to being different, to being inside a computer. It gives her a unique perspective but it also sets her apart from humanity. She loses something in the translation, not tangible but in the way she is perceived. Her partner, the woman who wanted her to join the project, can't quite accept what has happened, and the story explores how Marissa's isolation and loneliness inform on her observations of the world in decline. It's a story of loss and surviving, and how sometimes surviving doesn't really mean saving anything. Still, there is something like hope in the story, though there is also the sense that Marissa doesn't trust it, that she has no real reason to trust it, that given her life she doesn't know if she should hope there is a brighter future or just a slow decay. It's a lovely story, a slow but steady build, and worth checking out.

Ah, a story about numbers and aliens and school. Just my kind of thing really, though I will admit to being a lowly English major. Still, math has always been something that I've enjoyed (just wait for tomorrow's thoughts on my spiffy new spreadsheet). But this story focuses on Mel, an Autistic doctor of mathematics who is teaching early on the first day of classes despite an alien object orbiting the Earth. No one has figured out what exactly the aliens want, so it's business as usual, or close enough. Of course, it doesn't stay that way as the aliens begin communicating with everyone on the planet at the same time. in math. It's geeky numbers heaven for Mel, who views the questions posed by the aliens as a fairly routine conversation. Math and numbers are the one thing that make complete sense to her, and she sees no danger is sending off answers back, which immediately changes the game. It's something that the people around her don't really trust. Afraid of what the aliens might do, they don't want anyone communicating, but Mel isn't about to let herself be stopped, cut off from the most engrossing math talk she's had. Defying authority, she forges ahead, knowing that if the aliens are talking math that they probably aren't there to destroy everything. They just want to talk numbers, which is something Mel is uniquely positioned to do. It's a fun story, Mel an interesting main character and her observations about numbers, the way the author captures her mental processes, seemed well done and shows a good amount of research. And the ending is about overcoming fear and violence and focusing on what's really important: finding a common language to communicate in.

This one takes the cake as the weirdest and darkest from Crossed Genres this month, and it is a delightful tale of a woman trapped by her grief and by her circumstances. Working as a cafeteria staff at a school, she deals daily with the indignities of working just as at night she deals with her neighbors fighting, the domestic abuse that becomes a background hum of her life. She's also dealing with the fact that her husband cheated on her and then left her, a grief that she fears has broken her, made her unable to stand up to the pressures and pain of life. She thinks this in part because she's started to see dwarves, a bit like the kind from Snow White, who clean her house in exchange for processed food. She doesn't know if they're real or not, doesn't really want to know, but she feeds them and they respond by cleaning. They aren't clean or cute, though, instead are grubby and rude and standoffish. Until she begins to stand up for herself. As the world keeps beating her down, she finally stands up, shocked out of her slump by the death of a friend, and refuses to go quietly. The dwarves become her tools for revenge, for peace, acting on her behalf to commit violence. It's a creepy situation and the story does a very good job building it, making things seem like it could be a dream or dillusion. Whatever the case, I wasn't sure whether to cheer or cringe as she took back control, but even as she found her footing she slipped down into a sort of dependence on the dwarves, and there is a lot to unpack with her relationship to them. It's a fascinating and visceral story, though, and one that you should definitely sit down with and examine carefully.
Posted by Charles Payseur at 1:00 AM